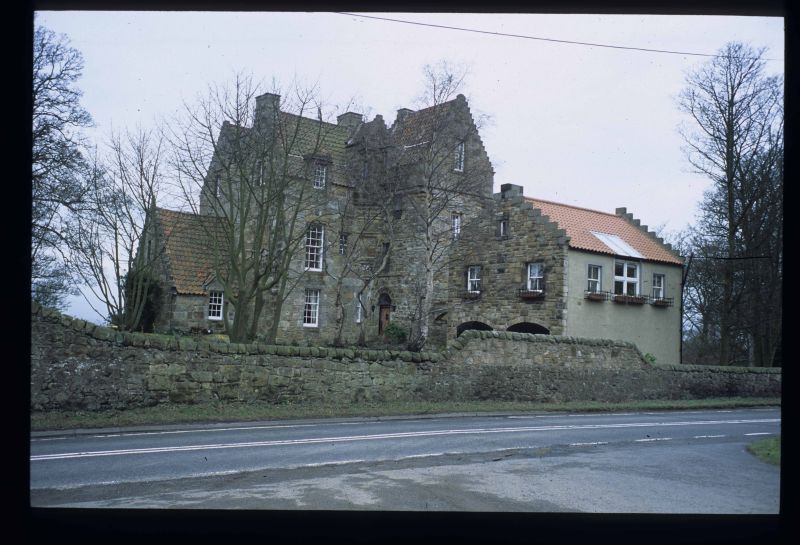 NOTES: Born in Wolverhampton and educated at Cambridge, William Thomas became the manager of Burntisland Aluminium Works and also ran a burgeoning workshop for building and repairing harpsichords and clavichords at Rossend. In the 1930s Thomas lodged at the mid 16th century Rossend Castle in Burntisland and in 1946 he purchased the site which Easterheughs sits upon. He decided to build a pseudo Scottish tower house as his home and workshop and called on the help of his close friend and fellow music enthusiast John Rhodes. Neither men had any architectural or building training and although they sought some help, the majority of the work is theirs alone, standing as a testament to the remarkable vision and skills they possessed. Thomas also recognised the worth attached to the preservation and re-use of historical building materials and saved much fabric which in the post war period would have otherwise been discarded and lost. The random rubble that makes up the walls came from the nearby villages of High and Low Binns which had been deserted due to the expansion of the aluminium works. Many of the moulded stone window surrounds were salvaged from remnants of the nearby-demolished 16th century Otterson Castle. Many of the roof timbers were fashioned from disused railway sleepers and the pantiles came from Auchtertool distillery.

Thomas and Rhodes- first task was to flatten by hand the craggy rock foundation that Easterheughs sits upon. No scaffolding was used and the building evolved from the bottom up and from the inside out - the niece of Thomas records that "Mr Thomas once joked that they put in lots of windows so that they didn't have to build so much wall" (Mrs Berkley). The E wing was built as a workroom for building and repairing harpsichords and clavichords, it has now been converted to a kitchen (2002).

Although the walls follow the vernacular tradition of being load-bearing stone with lime mortar, the floors and newel stair are concrete. The stair is much broader than those found in tower houses, designed specifically by Thomas so that a breakfast tray could easily be carried up stairs. By the mid 1950s the walls, gables and stacks were complete and Thomas and Rhodes turned their attention to the interior. Rossend Castle at this time had fallen into serious disrepair and facing possible demolition. The council sold Thomas some of the internal fittings for a minimal fee of #6 per load. Many interior features such as the door jambs, cornicing, window surrounds and mantelpieces originate from Rossend. Photographs of Rossend Castle, held at the NMRS show that nearly the entire large room to the 1st floor at Easterheughs uses late 17th century features from 2 separate rooms at Rossend. The room was designed to serve as a music room where Thomas and Rhodes could host musical soirees. According to Mrs Berkley, the proportions of the music room were based on Gibbs- 'Rules for Drawing the Several Parts of Architecture of 1732', the parquet floor drawing inspiration from the floor of the Golden Room at the Louvre. Mr Thomas lived in the house until his death in 1989 with the interior of the 2nd floor still unfinished. The Scottish painter Jack Vettriano lived here in the late 1990s. It is of interest to note that Rossend Castle managed to survive demolition, finally being restored in 1975 by the Robert Hurd and Partners.