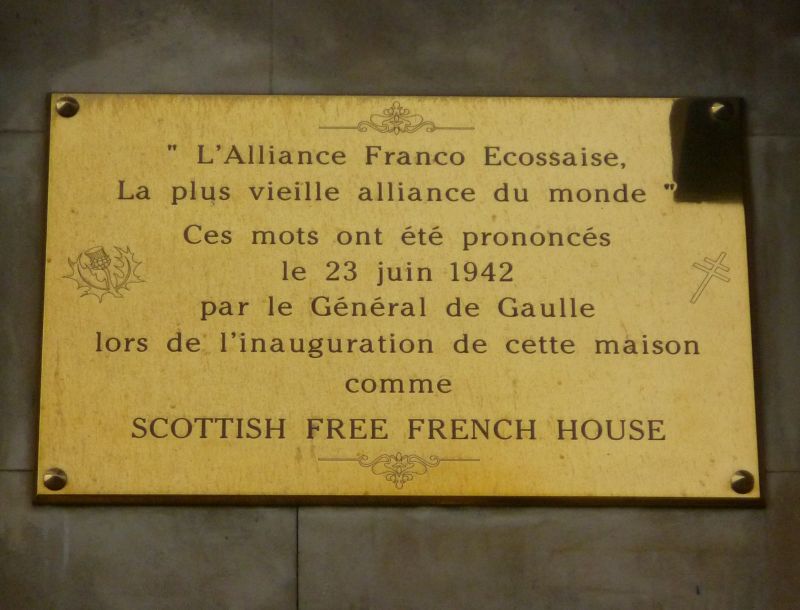 Part of the Calton A-Group.

In June 1942, 28 Regent Terrace became the Scottish Free French House, officially opened by General Charles de Gaulle. The purpose of the Free House was to provide a place for men on leave from the Free French forces to stay before other hospitality was found for them; the house was also to act as the centre of French culture in Scotland. After the war, the house became the French Consulate for a time.

Regent Terrace forms part of the showpiece of Playfair's Eastern New Town (or Calton) scheme, and as such is an important example of the work of one of Scotland's leading early 19th century architects. Playfair was one of the major driving forces of the Greek Revival in Edinburgh at this time, and his public commissions such as the National Monument, the Royal Institution and the National Gallery (see separate listings) gave strength to Edinburgh's reputation as the Athens of the North. The Calton Scheme was one of his few domestic commissions, and the variety of designs, different for each street, demonstrates Playfair's expertise with the Grecian style and his characteristic punctilious attention to detail. The railings and balconies are important as their design features distinctive elements which Playfair repeated in large areas of the Calton scheme.

The origins of the Eastern New Town, which was to occupy the east end of Calton Hill and lands to the north of it on the ground between Easter Road and Leith Walk, lie in a 'joint plan for building' which three principal feuars (Heriot's Hospital, Trinity Hospital and Mr Allan of Hillside) entered into in 1811. In 1812 a competition was advertised for plans for laying out the grounds in question. Thirty-two plans were received, displayed and reported on by a variety of people, including eight architects. Eventually, it was decided that none of the plans was suitable. However, it was a more general report by William Stark (who died shortly after submitting it) which caught the attention of the Commissioners and formed the basis of the final scheme. Stark's central argument stressed the importance of planning around the natural contours and features of the land rather than imposing formal, symmetrical street plans upon it. After several years of little or no progress, in 1818 the Commissioners finally selected William Henry Playfair, Stark's former pupil, to plan a scheme following his master's Picturesque ideals.

The resulting scheme, presented to the Commissioners in 1819, preserved the view of and from Calton Hill by the creation of a limited triangular development of the three single-sided terraces (to make the most of the spectacular views), Royal, Regent and Carlton, on the hill itself. These looked over a huge radial street pattern, centred on the gardens of Hillside Crescent, on the land to the north. The feuing of these lower lands started well, with Elm Row, Leopold Place, Windsor Street and the west side of Hillside Crescent being built fairly swiftly. Regent Terrace was feued in 1824 and building began the next year. In 1831, nearly all the houses were complete, and by 1833, all were inhabited except No 14. However, demand for the feus in other street of the scheme faltered severely, due to the growing popularity of new properties being built to the west of the New Town. This had a particularly bad effect on Royal Terrace, where construction stopped for 20 years, leaving 2 large gaps in the Terrace and a further 3 unbuilt feus to the west end. The fate of the whole Calton scheme was sealed in 1838, when it was decided that feuars should pay poor-rates to both Edinburgh and Leith. This virtually halted development for the next thirty years. The result of all these problems was that very little of Playfair's original scheme was ever built. When building resumed in the 1880s, some of Playfair's original street lines were adhered to, as was the case with Hillside Crescent, and in others such as Brunton Place, Brunswick Street, Hillside Street (originally to be a longer street called Hopeton Street), and Wellington Street (also curtailed). However, due to piecemeal residential, industrial and transport developments immediately to the north, it would have been impossible to further follow Playfair's original layout, even if this had been considered desirable.