A Category A Listed Building in St Ninians, Stirling 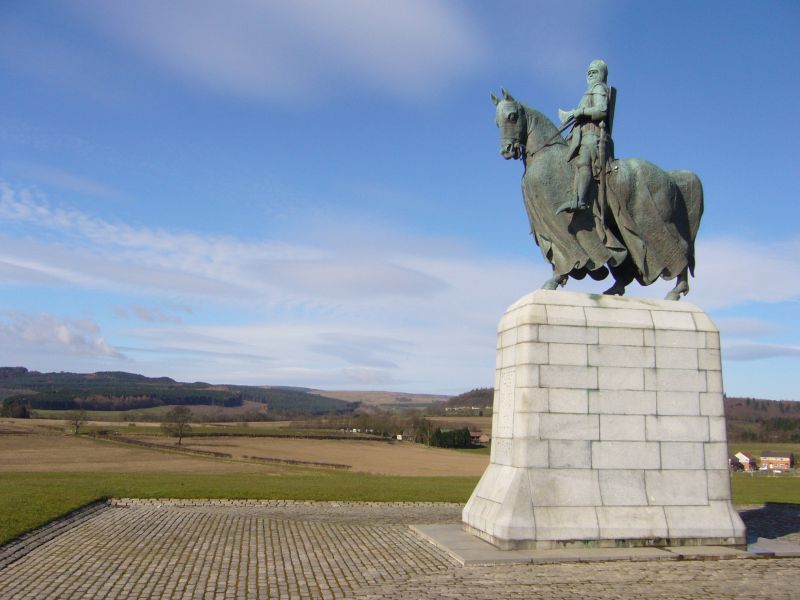 Formalised architectural and landscape re-definition of the battle-site of Bannockburn (23-24 June 1314) made essentially for the 650th anniversary in 1964 of the Battle. The overall concept was by Sir Robert Matthew, the planted landscape scheme by H F Clark, with F R (Eric) Stevenson as project architect for the buildings (RCAHMS).

Matthew's concept envisaged a landscape scheme between the main (A9) road and the Borestone (the traditional site at which King Robert I raised his standard, and which had already been assigned a flagpole in 1870, a 120ft flagpole was erected by Dumbarton & Stirling Lodges [Groome] and the remains of the Borestone were incorporated into a cairn, built 1954 by the National Trust for Scotland),

beyond which would stand a statue of the King, by Charles d'Orville Pilkington Jackson. The route between the road and the Borestone would be marked by pathway and trees. The Borestone would be enclosed in an open circular structure, the Rotunda, formed out of concrete panels, and with an orientation building attached on one side. The form of the Rotunda was doubtless intended to echo Neolithic henge monuments, but also almost certainly draws inspiration from Gunnar Asplund's renowned Woodland Cemetery in Stockholm (1930s-1950s). It was evidently built in 1962-1964 without the orientation building (which was later built on a separate site, and is not included in this listing).

The Rotunda comprises a circular enclosure defined by a concrete-block wall topped by a prominent timber rail; some massive, almost powerful, rough boulders at the entrance bind the artificial to the natural landscape. The enclosure is open at two places, to orientate the visitor on their path, as the main ceremonial approach route changes direction at this point. The S opening gives views to the line of advance of Edward II's army and the N opening provides views to the statue and in the distance Stirling Castle, the army's objective.

The statue, one of Scotland's best-known post-war sculptures, was unveiled on Bannockburn day, 1964. It is a massive bronze figure of the King in light armour holding his battle-axe and astride his horse; all raised on a lofty white granite plinth.

The Bannockburn Heritage Centre (excluded from this listing) is a white harled block with rotunda designed by Wheeler & Sproson. Its shape echoes that of the Rotunda, which is accessed from the Heritage Centre by a tree lined avenue. The avenue is splayed to provide views of the statue and the Rotunda, which acts as a setting for the flagpole and memorial cairn. The equestrian statue of King Robert, which has become a national symbol, stands in a commanding site on high ground and was designed to face southwards towards Edward II's line of advance and block the approach to Stirling Castle. The monuments are cared for by the National Trust for Scotland.