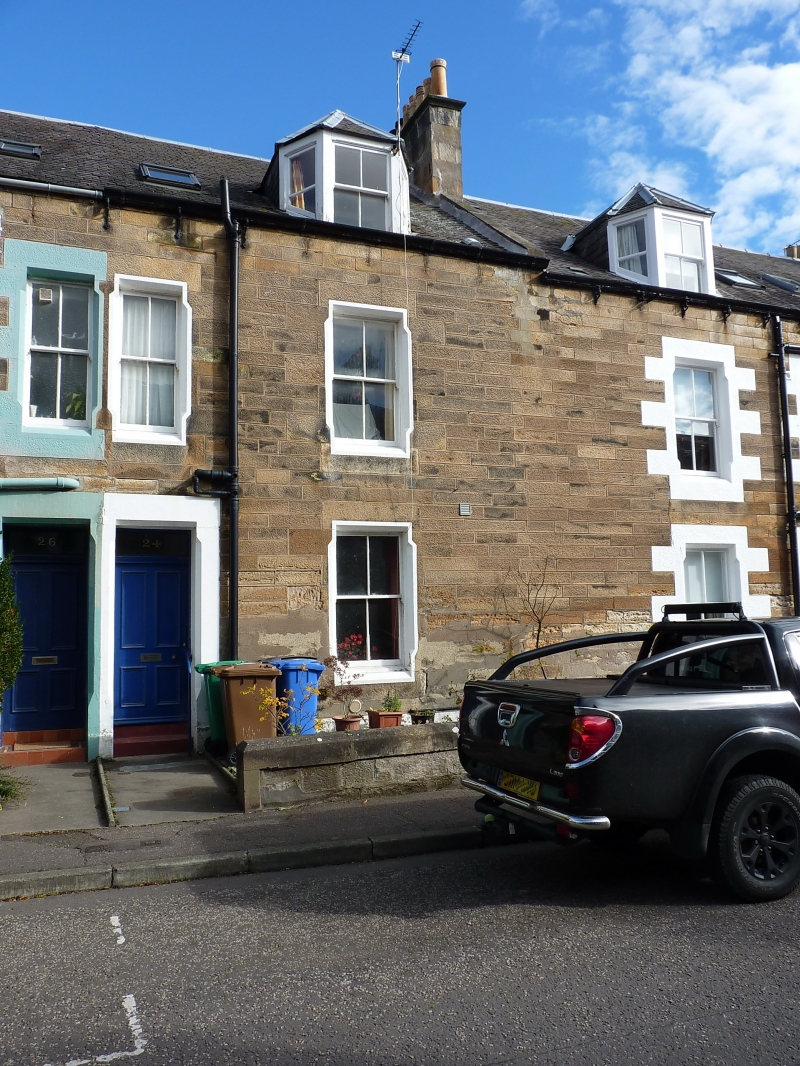 Robert Williamson trained as a plasterer under his father, Robert Williamson of Pittenweem, before turning to speculative building in Cellardyke and Kilrenny. It is probable that he was responsible for all the tenements on this side of Rodger Street. The first houses built by him at what is now Nos 10-14 differ from the others in that externally they appeared to be two dwellings but internally they were subdivided into 5 flats. The ground floor of No 14 was Robert Williamson's home until the family moved to a larger property in 1884, which accounts for the presence of the ornate plastered ceiling in this property. The rear buildings at this tenement operated as a works store and sleeping accommodation for some of their children, in contrast to the fishing purpose of the other properties. It is likely that the rest of the street was modelled on those already underway on the opposite side of the street - two-family tenements with access through a doored close leading from front to back and an internal rear stairway. The majority of these tenements appear to have been unobtrusively converted to accommodate one family now. As two-family tenements it was usual for the owner to occupy the slightly more spacious upper floor and to rent out the lower floor to provide additional income. The walled areas to the front of the tenements allowed for the temporary setting down of nets. In contrast to the traditional style of fisher houses with a forestair, where the nets were stored below and living accommodation was above, the Rodger Street buildings had a garret or attic area for the repair and storage of fishing equipment. Fixed external rear hoists were used for the nets, but sliding dormer beams were more common. It is not known if any of these survive now, although one was extant at No 4 in 1986. In addition to this, the houses were provided with net and gear storage in the form of detached sheds to the rear of the properties. With high walls on either side the sheds form a small courtyard. Water pumps provided a convenient source of water. Beyond the sheds are generous gardens. The courtyard area would have been entirely concerned with fishing. The sheds to this side of Rodger Street appear to be mostly single storey in contrast to the 2-storey sheds on the West side. Comprising probably a lavatory, coal store and washhouse, the sheds are divided internally to provide a loft space for nets and gear. It seems likely that No 35 on the west side of Rodger Street was built by Williamson as the architectural detail follows that of the east side. The majority of the building work in Rodger Street was completed by 1883. Rodger Street is named after the renowned Cellardyke-born captain and shipowner, Alexander Rodger (1801-1877). In 1866 the annual tea race from China to London was won by a hair's breadth by the Taeping, owned by Captain Rodger and crewed by men from Cellardyke. It narrowly beat the Ariel, crewed by Anstruther men. Captain Rodger subscribed to harbour improvements in Cellardyke in 1868 and gave money to assist the poor each winter.