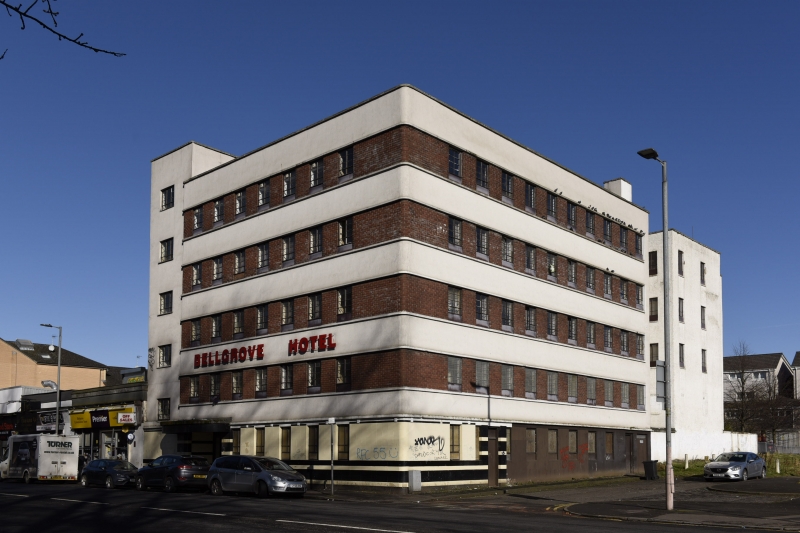 This building is of importance both stylistically and as part of Glasgow's social history. An excellent and particularly striking example of Thirties Moderne architecture, the Bellgrove Hotel encompasses many of the essential components of this style: clean white lines, curves, a horizontal bias, and decorative bands of coloured tiles. It forms a significant part of the streetscape in an area which has changed greatly within the last 50 years.

During the 19th century the area around the Gallowgate became heavily industrialised and the Bellgrove Hotel, as a working mens hostel, was presumably built to provide modest accommodation for the many workers still required in the area in the first half of the 20th century. Historical photographs of the building in use as a hostel in the present dining hall show men relaxing in the lounge at tables and chairs or in easy chairs, and a 'corner of the restaurant' where aproned waitresses stand beside ordered napery-laden tables.

Built for Thomas Roger, the initial set of Dean of Guild Plans drawn in March 1935 show the entrance on the SE corner of the building. The drawings dated December 1935 show the entrance as constructed. The plans show that 2 lavatories, 1 footbath and 1 bathroom were allocated per floor. Steelwork was by Redpath, Brown and Co.

Currently (2004) the building operates as a privately-run hostel for homeless men.