A Category B Listed Building in Blantyre, South Lanarkshire 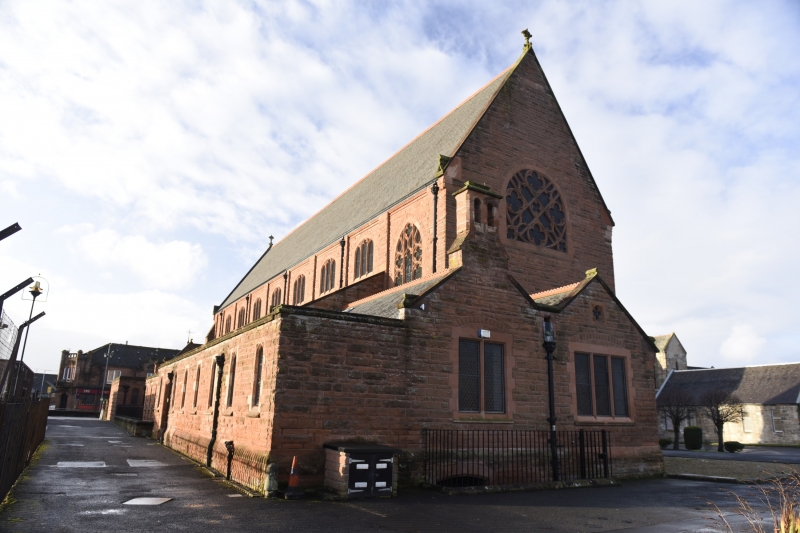 NW ELEVATION: projecting side aisle with window to each bay, door to penultimate bay at left, 2 small windows to outer left and further window on return to left; regular fenestration with dividing buttresses to 1st stage of nave and tall window to chancel window to chancel, all others segmental.

Ecclesiastical building in use as such. Opened on the 18th of June, 1905, just one year after the death of Peter Paul Pugin, St Joseph's is dominantly sited on the Glasgow road adjacent to the Livingstone Memorial Church. Blantyre's prosperity at this time was due to the opening of six collieries. The tall building with steeply-pitched roof is said to rival (though not permitted to rise above) the six-stage tower of the Memorial Church. Officials at the opening ceremony included preacher Dr Hackett, Deacon Fr O'Neil, Sub-deacon Fr Smythe and Archbishop of Glasgow J Maguire. Built at a cost of £100,000, St Joseph's underwent little change until 1924 when the vestry area and sacristy may have been added, and 1928 reredos of Caen marble and altar of Carrara marble were designed by Ernest Schoefelberg of London and erected by Messrs Vickers of Glasgow. At that time, the interior was re-decorated by Messrs Stirling & Sons of Glasgow to the designs of Mr Morton of the Glasgow School of Art, and stencils executed by John Hardman Studios. The church was re-opened on the 4th August, 1928. The next significant date seems to be 1948 when the east rose window was installed by John Hardman Studio, Birmingham at a cost of £775, and the Sacred Heart Altar (Baptistry) of 'white Sicilian and coloured marbles similar to present altars' by Galbraith & Winton Ltd, Marble & Tile Contractors, at a cost of £1,466. Further work was carried out by the John Hardman Studios in 1954. St Joseph's principal gabled elevation is divided into the standard 'A' form typical of Peter Paul Pugin, and is a perfect example of his basilican plan as described by Sanders 'with a short sanctuary and clear views from the nave and aisles, which had become standard for British Catholic churches at least since E W Pugin's adoption of slightly before 1860'. The Art Deco Presbytery flanks the church to its north west and is listed separately.