A Category B Listed Building in Mossend and Holytown, North Lanarkshire 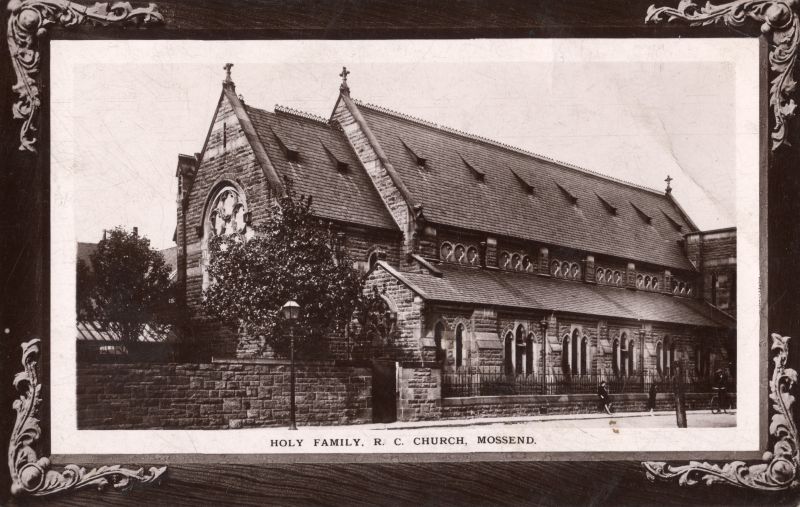 Ecclesiastical Building in use as such. The church stands at the corner of Hope Street and Calder Road with its entrance on the latter; the Presbytery is on Hope Street and the church hall on Calder Road. The church is an important example of the early work of Peter Paul Pugin for the Archdiocese of Glasgow, and is of considerable streetscape importance as it stands on one of the main roads leading into Mossend. There are very few other buildings of much architectural merit in Mossend.

The earliest building on this site is the present church hall. This was built in 1868 and comprised a simple church with a small presbytery attached to one side and a 2-storey school building on the other. Following the re-creation of the Catholic Hierarchy in Scotland in1878 there was an increase in church building, especially in the archdiocese of Glasgow, where the Catholic population had expanded rapidly due to an influx of Irish immigrants. The majority of the new churches built between about 1880 and 1904 were designed by the architect Peter Paul Pugin, the main practitioner in the firm Pugin & Pugin. Peter Paul Pugin was the youngest son of AWN Pugin. His elder half-brother, Cuthbert, was also a partner in the firm, but retired in about 1880. After Peter Paul's death in 1904 the practice was continued by his nephew, Sebastian Pugin Powell.

Pugin and Pugin churches tend to be similar in both style and layout. The plan is characterised by a long nave with clear views to a relatively shallow chancel, side aisles terminating with side altars flanking the chancel, and a narthex at the entrance end with an organ gallery above. As here, the entrance elevation usually faced the busiest street, in order to minimise noise disturbance.

Holy Family was one of the earlier churches built by P P Pugin, and was designed with a broach spire that was unfortunately never built. This was not due to financial reasons, but because objections raised by the Church of Scotland led to plans for the spire being refused. Later churches by P P Pugin were usually designed without spires to keep costs down. The interior of the church is very fine, with much of the original furnishings and stencilled ceiling. The altarpieces would have been designed by P P Pugin and are likely to have been carved by R L Boulton or Vickers.