A Category B Listed Building in Paisley, Renfrewshire 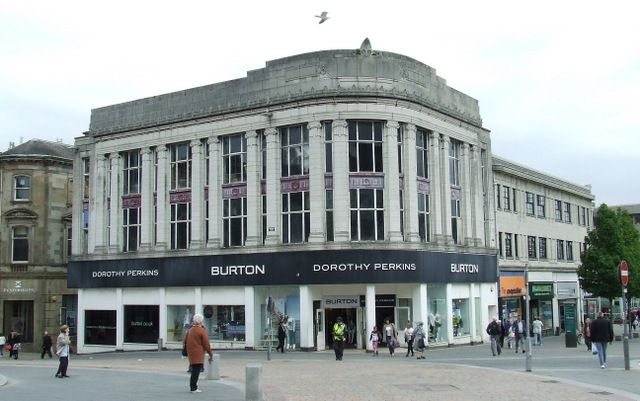 Situated at Paisley Cross on the corner of the High Street and Gilmour Street. The rear elevation faces Dyer's Wynd.

A well-detailed Art Deco shop building occupying a very prominent position in the centre of Paisley. Henry (or Harry) Wilson was based in Leeds and was architect to the Montague Burton tailoring chain.

Burton's was a pioneering clothing chain, established by a Jewish-Russian immigrant, Meshe Osinsky, who came to England at the age of 15 in 1900 and changed his name to Morris (then later Montague) Burton. He started as a door-to-door salesman selling accessories, but by about 1905 had opened a shop in Chesterfield selling ready-made suits. He felt that it should be possible to make made-to-measure suits at prices that working men could afford and found a company, Zimmerman Bros, in Leeds who could supply these. Burton's grew very rapidly, first in the Midlands and then across Britain: in 1919 he had 40 shops; 10 years later there were 200 branches. From 1910, Burton's manufactured their own clothes, from a factory in Leeds, and this became the largest clothing factory in the world, employing 10,000 workers and producing 30,000 suits a week. Burton's had a strong presence on the High Street, with Art Deco buildings designed mostly by Henry Wilson. These were often built to incorporate dance halls or billiard halls on the upper floor, as a way of attracting customers. It is not known whether the Paisley branch incorporated either of these.