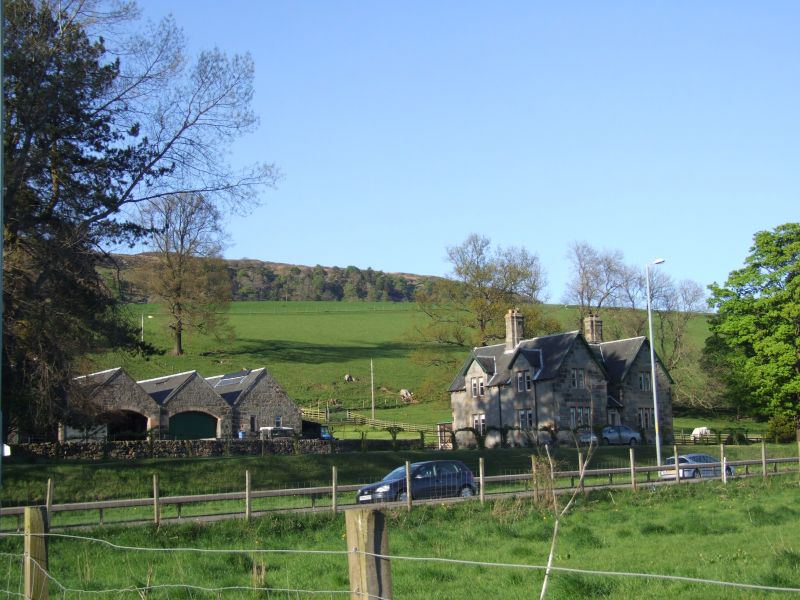 Gavinburn Farm is a historic and well-preserved farm, located in a prominent position on the north side of the Clyde estuary, on the bottom slopes of the Kilpatrick Braes. The farmhouse and main farm buildings appear to have been virtually unchanged since the 1st Ordnance Survey survey in 1860, but the name of Gavinburn is known to date back to 1777, when it is marked on Charles Ross's map of the Shire of Dunbarton. The farm is located within the estate of Lord Blantyre, whose ancenstral seat, Erskine House (see separate listing) sits on the opposite side of the River Clyde overlooking the Kilpatrick Braes. The farmhouse demonstrates the common estate style found at Erskine in many buildings attributed to William Burn. Burn had trained in the office of Sir Robert Smirke (architect of Erskine House), and had previously designed the Blantyre Obelisk for the Estate in 1831. The farmhouse shares its distinctive rounded stone corbel eaves-course with the Stables, Kennels, Piggery and several estate cottages in the grounds of Erskine House (see separate listings), and also Gavinburn Cottages and Hole Cottage in the immediate vicinity of the farm itself. The farmhouse appears to have been first planned as a square, with the wing to the NE being added not long after, as the house appears as an L-plan on the 1st edition Ordnance Survey map of 1860. This pre-1860 date suggests that the farm may have been built within the same building campaign that produced the estate buildings at Erskine, with the Stables and Piggery dating from 1856 and the Kennels, circa 1860.