A Category C Listed Building in Strathearn, Perth and Kinross 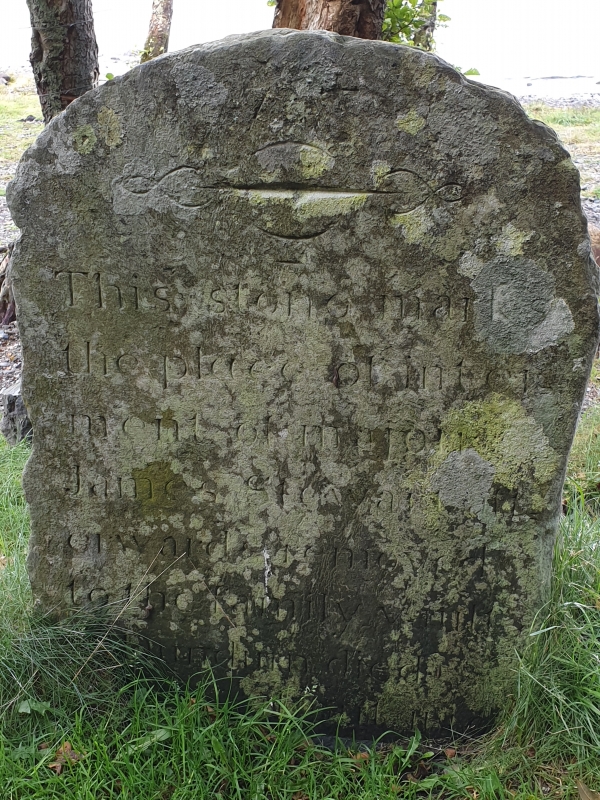 This stone, erected circa 1700 to commemorate an event in the previous century, is of significant local historical interest.

Description: the memorial is a rough rubble slab, cut to the front but left uncut to the rear. Its design is similar to a stone further W along Loch Earn (McDonald of Glencoe Stone

The carving consists of a simple curvilinear decoration above the inscription, which reads: 'This stone marks the place of interment of Major James Stewart afterwards removed to the family vault at Dundurn died about 1660'.

The story of the burial of James Stewart, who died in 1662, is well known, although the details vary.

Major Stewart died a natural death at Ardvorlich and his body was being carried to the family burial place at old St.Fillans church at Dundurn. Enemies of the family, probably the McGregors, threatened to intercept the funeral, causing the body to be buried at the loch-side before being re-interred later. Another version gives a snowstorm as the reason for the interment.

Major James Stewart was a well-known and sometimes notorious figure. The story of Stewart's murder of Lord Kilpont during the Wars of the Covenant was fictionalised in Walter Scott's 'A Legend of Montrose.'