A Category A Listed Building in Crail, Fife 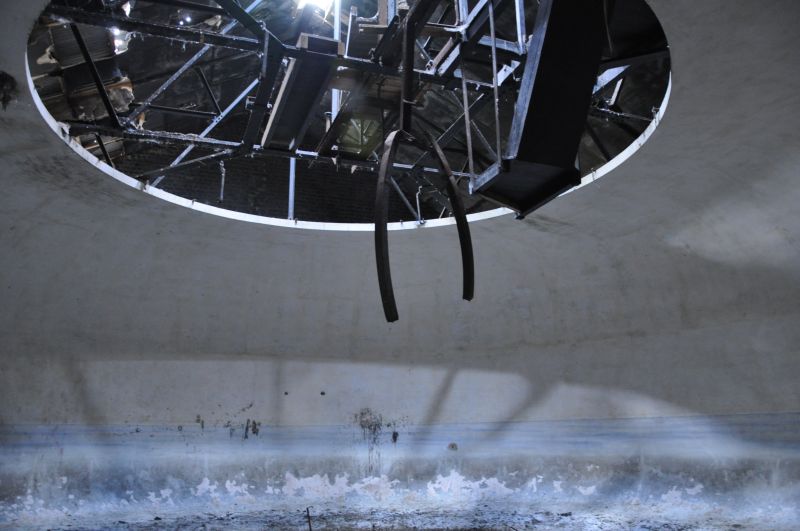 All listings at Crail Airfield are Group Category A. The Runways are designated as a Scheduled Ancient Monument.

The Torpedo Attack Training Building is noted as building number 6 on the DTZ/LDN report.

The TAT building is an extremely rare example of its type. Crail is thought to be the first experimental type and was created to enable drills in estimating the height and range of torpedo deployment. The plastered hemispherical cyclorama is painted with a horizon line which is still visible. An image of a ship was projected on to this screen and the trainee sat in a high level 'link trainer' - a representation of a cockpit. The speed and weather conditions could be varied to suit the instructor. Although most of the mechanism is not now in situ, some is currently (2006) stored in the Engine and Aircraft Repair Shop (see separate listing).

Crail Airfield is the best preserved example of a Second World War Naval Airfield in Scotland. It is remarkable for its survival, completeness and the rarity of some of the individual buildings. It is highly significant not only in the wider terms of Naval and Second World War history, but is also of great local importance. Crail was one of 4 airfields constructed in the early war period (along with Arbroath in Angus, Yeovilton in Somerset, and St Merryn in Cornwall). It follows the Naval pattern of 4 narrow hard runways and associated brick, concrete and corrugated iron structures. The runways are part of the main operational side, the 'Technical Area' to the South-East. The recreation and living quarters of the 'West Camp' are located to the North-West. These areas are separated by the road between Crail and Balcomie. The aircraft hangars and the great majority of the interiors are the most significant losses at the site. Many buildings have been altered and are in a poor state of repair. Around 2000 personnel were stationed at Crail Airfield, both living at the airfield itself and billeted in Crail and the surrounding area.

An airfield operated briefly at Crail in 1918 during the First World War. It was closed in 1919 and no buildings from this period are thought to survive. The site was re-acquired in 1938 and construction of a new airfield began in 1939. In 1940 the site was commissioned as the Royal Naval Air Station HMS Jackdaw and functioned as the main Fleet Air Arm base for training pilots in torpedo warfare. Crail housed 785, 786 and 711 Squadrons and was never a permanent home to an active front line squadron. At Crail pilots were taught the art of flying low over the water, dropping dummy and live torpedoes. The last permanently based aircraft left the base in 1947 and the site became HMS Bruce - the Royal Navy Boys' Training Facility until 1949. It was subsequently an Army Transit Camp (including a mobilisation base for the Black Watch 1952-4) from 1950-4 and served as the Joint Services School for Linguistics during the period 1955-60. The site was then sold and the majority of the buildings were adapted for pig farming. Some farming still takes place along with car boot sales and amateur car racing events (2006). The majority of the airfield was scheduled as an ancient monument in 1997 and this was reviewed in 2006 with a reduced area of scheduling covering the runways and selective listing of the built structures.