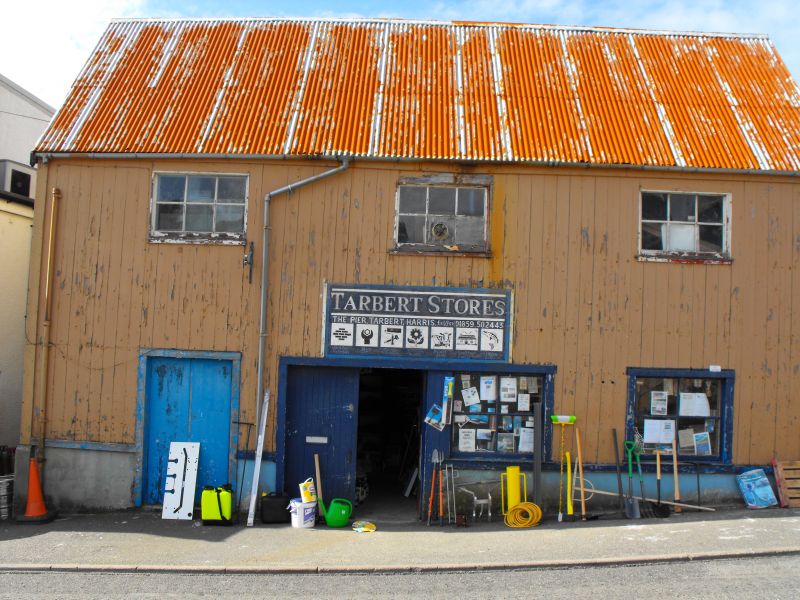 Prominently sited on the old road leading to Tarbert Pier, Tarbert Stores continues largely as originally purposed in supplying the needs of fishermen and other tradesmen in an area which had virtually no road access before the 20th century. Owing to the lack of local materials and high cost of transport, timber is an unusual building material for the area. However, this simple and practical timber construction is thought to have been funded by a local benefactress, with both the design as well as the timbers deriving from Swedish origins as cargoes of fish were exported to Sweden and the timber purchased for return ballast.

Tarbert was established in 1779 as a fishing settlement. 'The historic capital of Harris and the old port of entry was Rodil (sic)' (Shaw Grant). By 1836 Alexander Norman Macleod had sold Harris to the 5th Earl of Dunmore and Lady Catherine became an important benefactress. She funded much needed restoration at Rodel Church and in 1849 set up an embroidery school as well as supporting the growing Harris Tweed industry. If Lady Catherine was the benefactress of Tarbert Stores, the building may have been erected significantly earlier than 1900, but it does not appear on the 1st edition Ordnance Survey Map of 1876. It is, therefore, more likely that the benefactress was Lady Emily Scott, or one of her successors, as Sir Edward Scott took over the North Harris Estate from the bankrupt Earl of Dunmore in 1868.