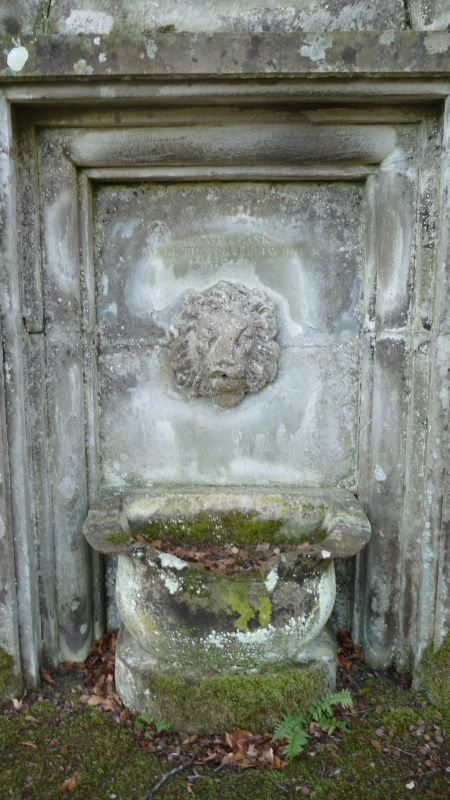 This unusually fine drinking fountain is situated close to the eastern entrance to Murthly Castle. Although no longer used and somewhat overgrown, the fountain is in good condition and may have included some sort of formalised sitting area commanding river views. The Inventory entry for Murthly Castle says it is 'An outstanding landscape which makes a major contribution to the surrounding Tay Valley scenery and provides an attractive setting for several category A listed buildings'. Within the vast Murthly Estate policies, this area has long been a popular fishing spot and the fountain may have been installed for the use of fishing parties prior to the building of the adjacent lunch hut during the middle years of the 19th century. However, the formality of the fountain is reminiscent of the type found within formal gardens closer to the big house, so it was probably also intended to provide refreshment for those following one of the many formal walks in the outer policies. The somewhat eroded two line inscription appears to be in English possibly with the word 'BANK' closing the first line and 'DRINK' closing the second. The Parkland, laid out in the 17th and 18th centuries was enlarged and completely remodelled by John Wallace in 1830. His massive scheme created parkland throughout the policies at a time when it was not unusual for imported antiquities to be incorporated into such designs. The revived popularity of formal gardens led to 'foreign sites sometimes being plundered for the benefits of Scots gardens and courtyards' (Buxbaum). Groome says of Murthly Castle that 'The grounds are of singular beauty, both natural and artificial, with the 'Dead Walk' or ancient yew-tree avenue, the Douglasii Avenue, the Lime Avenue (1711), the Deodara or Sunk Terrace, and every variety of hill and dell, wood and stream, carriage-drive and sequestered walk'.