Our Lady Of The Isles Statue, Ben Reuval 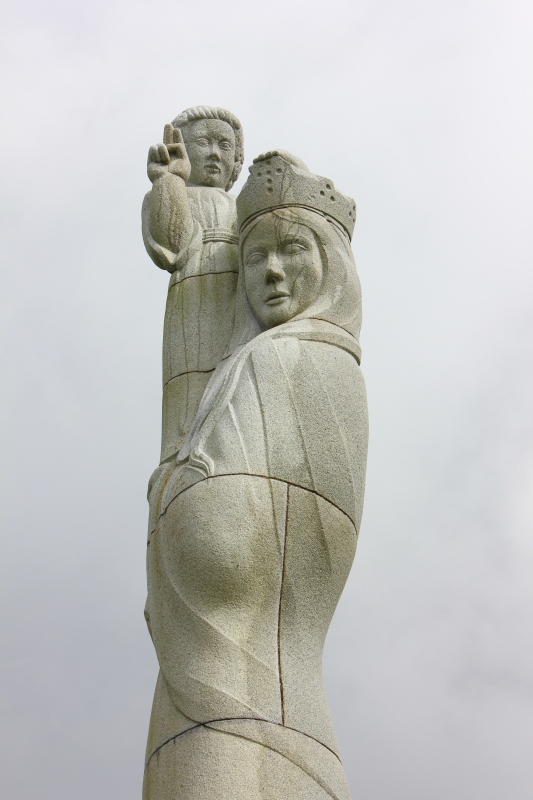 Entry Name: Our Lady Of The Isles Statue, Ben Reuval

Listing Name: Ben Reuval, Our Lady of the Isles Statue

Consecrated on 15 August 1958 by Bishop Kenneth Grant, the statue of Our Lady of The Isles is an outstanding example of Hew Lorimer's craft. His characteristic semi-naturalist style is more readily recognised in the stylised, columnar figures carved into the façade of the National Library in Edinburgh (listed separately), but in this rugged isolated terrain, the Madonna soars above the landscape and can be seen from great distances. A smaller version of this statue is located to the north of St Michael's Church, Ardkenneth, South Uist (listed separately), and a small bronze version was cast in 1972.

Hew Lorimer (1907-1993), second son of Scottish architect Sir Robert Lorimer, spent his early years in the studio of Catholic sculptor Eric Gill. Hew Lorimer's work is spread across Scotland, from Dundee, Tayport, St Andrews and Pittenweem, to Kippen Parish Church, the Castle of Mey, Fasnakyle Power Station and Pollok House in Glasgow. In 1996 The Hew Lorimer Trust was set up by Vincent Logan, Bishop of the Diocese of Dunkeld, in recognition of the importance of his contribution to Scottish sculpture. The 'Our Lady of The Isles' statue on South Uist is possibly Hew Lorimer's most famous sculpture. Unlike the comparable allegorical figures of 'Medicine, Science, History, Poetry, Law, Theology and Music' at Edinburgh's National Library, the South Uist statue is unusual for its isolated position and independent architectural qualities, rather than assuming a supportive or decorative role to a more substantial structure.