A Category B Listed Building in Leuchars, Fife 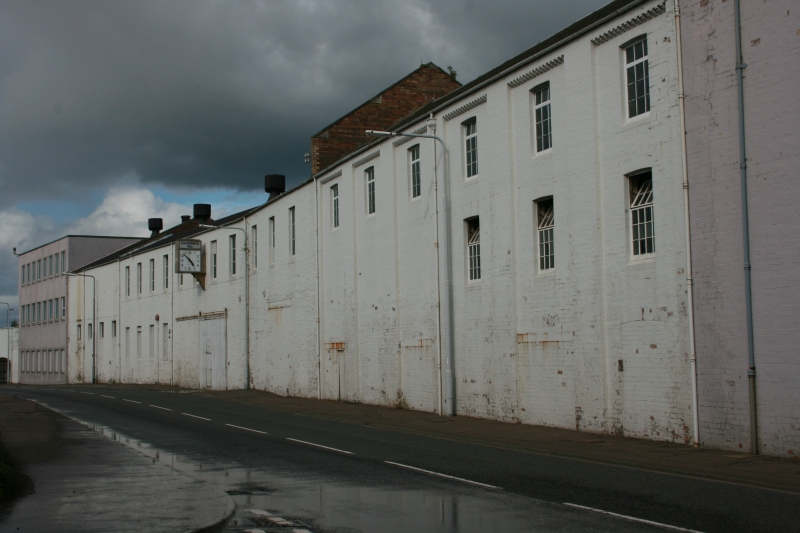 Evidence of variety of build dates at E (rear) elevation which is blank apart from vehicular door at outer left adjacent to whitewashed brick projection over cartway (N elevation of building 3A).

E (rear) elevation with 4 windows grouped to left over vaulted cartway; bays to right with centre door and flanking windows to each floor.

The visual impact of Guardbridge Paper Mill's impressive street elevation tells the story of almost 200 years of industry at the heart of a small Fife village which originally clustered around the 17th century Guard Bridge, which it now largely defines through its presence and the expansion it brought about. The rare survival of core buildings from the Seggie Distillery, preserved and converted for paper mill use, and the later 19th century extensions, represent the growth and prosperity of a community. The legacy of the site's industrial purpose is an outstanding architectural streetscape where varying build dates integrate visually in an unusually sensitive and coherent planning exercise. The site, which is uniquely placed to provide the key element of water for both distilling and papermaking, overlooks the former Harbour of Cupar, and sits beside the River Eden and the Motray Water. With the introduction of the railway, transport by water, road or rail became viable options for the import of raw materials and the export of finished goods.

Scotland's introduction to the paper making industry began in Edinburgh toward the end of 17th century, but until the introduction of the Fourdrinier paper making machine in 1799 expansion was slow. After the 1820s, when mechanisation was becoming more commonplace, demand for raw materials led to the introduction, around 1860-70, of esparto grass and wood pulp into paper making. Esparto grass was imported from Europe and Africa. Its effective treatment as a paper making product was perfected by Mr Routledge of the Eynsham Paper Mills near Oxford, and made popular at the International Exhibition of 1862. The newly registered Guardbridge White Pine Company moved to the production of finished paper in 1873, the site having previously produced only chemical pulp, and soon began to specialise in esparto papers made largely from esparto grass to which is added wood pulp or rags. At this time the paper-making industry was well represented in Fife with five paper mills located along the Leven valley alone. Rothes Mill, the earliest, had been opened in 1806 and the latest was established in 1869 at Strathendry.

The buildings at the former Guardbridge Paper Mill site represent the development, of a highly successful industry noted for producing Scotland's fine quality paper for a worldwide market. Paper production began in 1873 in the modified Seggie Distillery buildings, which has an 1810 core, and continued as such until closure in 2008. Throughout its long history the site expanded to more than 20 acres, much on land reclaimed from the Eden estuary, and boasted its own railway sidings and four monumental industrial stalks of which just one remains (see separate listing). Many of the earlier buildings fronting Main Street remain immediately recognisable from early photographs (the earliest probably dating from 1888).

The Seggie' Distillery was established by William Haig in 1810. Subsequently run by John and Robert Haig, the site was especially significant to the history of whisky distilling in Scotland owing to the early installation in 1845, of a Coffey patent still. However, by 1835 the bank had already taken control of William Haig's Seggie Estate and success was elusive. The plant was mothballed by 1852 and the distillery closed in 1860. W Chalmers & Co ran the site as a chemical pulp mill for some time until 1872 when The Guard Bridge White Pine Company Ltd began production of paper, made from wood pulp, as a finished article. Mr James Weir of Strathendry Mills in Leslie assisted as advisor on the technical aspects of paper making and in supervising the building of a new mill from April 1873. Mr J Galloway, was the first of three managing directors to live at the company's Seggie House (see separate listing), and the company went on to provide housing for the significant workforce throughout much of the 19th and 20th centuries. They also provided a primary school, the Jubilee Hall in 1897, and Memorial Hall to commemorate those lost in the First World War.

From modest beginnings in 1873 producing 15-18 tons of paper per week, the company went on to produce high quality esparto grass paper at the rate of 230 tons per week in 1951. The 1960s was a period of serious modernisation but market and technological changes led to the merger, in 1967, of The Guard Bridge Paper Company Ltd with The Culter Mills Paper Company Ltd to form Culter Guard Bridge Holdings Ltd. By 1988 the company had become GB Papers Limited, a subsidiary of the James River Corporation of Richmond, Virginia, USA, and finally operated as Curtis Fine Papers.

For further information on the history and interest of the site, see separate listing of boiler house and stalk with which the earlier mill buildings are grouped.