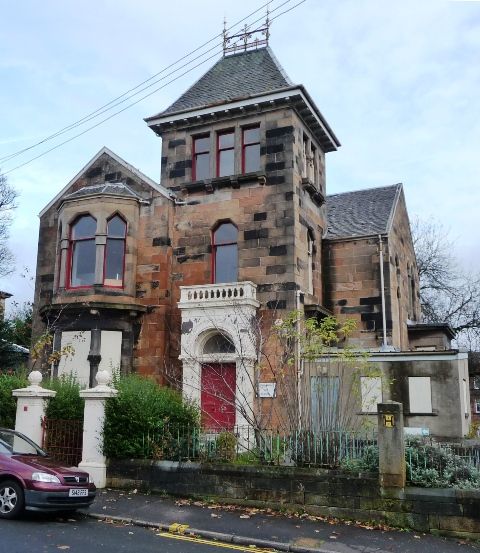 Originally called Highfield, Broompark Nursery is a good example of a 19th century villa which retains many of its particularly high quality interior features. A variety of marble chimneypieces remain as well as shutters, elaborate cornicework and exceptional detailing to the entrance hall and principal rooms including decorative doorpieces.

With its distinctive Franco-Gothic design, tall entrance tower and extensive boundary walls Broompark Nursery is an important feature in the surrounding streetscape. The eclectic detailing to the exterior stonework of the house itself as well the boundary walls and gatepiers sets this building apart, however, the level of individuality is given further importance by the detailing being repeated to a certain extent in the interior scheme. This suggests that the interior was specifically tailored and this increases its interest.

Alexander Dennistoun (who the area where this villa is situated was named after) bought large parts of this part of the East End of Glasgow around the 1850s and commissioned James Salmon in 1854 to create a plan for a villa suburb. Hence one possible attribution to Salmon. However similarities with details in John Gordon's Oakleigh Villa as advertised in Blackie's Villa and Cottage Architecture suggest he may have been the architect. The use of slender colonettes in the canted window and the portrait roundels in particular suggest his hand. Glasgow has a notable collection of mid-19th century villa suburbs, many of them planned by leading architects of the day, such as Pollokshields, laid out in 1849 by David Rhind. The plan was only partly realised and Broompark Circus and Circus Drive are the only survivors of this ambition.

Although Broompark Nursery does not feature in Blackie & Son's Villa and Cottage Architecture of 1868 it is of a similar type to those in the publication which acted as a patternbook for fashionable house designs of the period.

Plans held at the Nursery, dated June 1950 and drawn up by the Health and Welfare Department, show the floor plan and it is presumed that this was when the building was converted from a private residence to a nursery. A photocopy of a historic photograph also held at the Nursery depicts the building shortly after it was built and shows the original railings and the conservatory which was replaced by the flat-roofed addition to the right of the principal elevation.