A Category B Listed Building in Newport-On-Tay, Fife 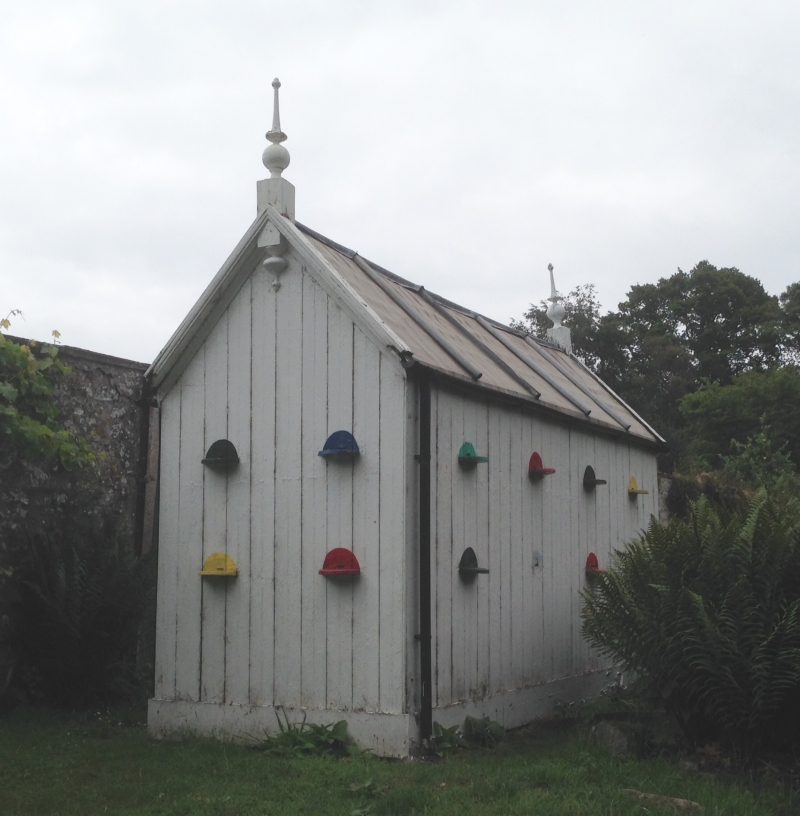 Circa 1850. Rectangular-plan, gabled timber bee-house near south-facing external wall of walled garden in the grounds of Tayfield House (see separate listing). Windowless, painted white with flightholes painted in brightly coloured semi-circles with corresponding half-moon timber platforms. Ball and dart timber finial to gables. There is a door to north side. 2 rows of 4 flight holes in south wall, and 2 rows of 2 in each of east and west walls. Each flight hole slot is 2 inch by one-quarter inch, fronted by a circular platform with a 5 inch radius.

The interior, seen 2013, has some timber shelving remaining (to support the bee hives or 'skeps').

The bee-house at Tayfield is understood to have been brought to Tayfield estate by boat in around 1850 and is an exceptionally rare surviving example of this unusual building type. Bee-houses became popular during the mid 19th century as interest in bee-keeping grew in the UK but remain rare in Scotland, due primarily to the colder climate. The bee-house, an eye-catching component of Tayfield House policies, is largely unaltered and remains in its original setting next to the south elevation of the walled garden.

The location beside the south wall provides bees with maximum sun exposure and protect them from northerly winds.The arrangement of narrow flight holes and half-moon ledges identify and characterise the structure as a bee-house. The holes prevent larger insect and other predators from gaining access. The finials to the gables are characteristic of mid-19th century architectural detail and add to the visual interest of this simple timber structure.

Seven generations of the family that own Tayfield House, since the 18th century, have created a designed garden and landscape around the house that reflects a professional and personal interest in nature and in nature conservation. The survival and maintenance of the 1850s bee-house at Tayfield, while no longer in use as such, is evidence of those wider concerns.

Beekeeping in Scotland has a long tradition. The earliest man-made hives or 'skeps' were constructed from coiled straw, wicker or reed. Shelters for these skeps took the form of alcoves, known as 'bee-boles', in south facing garden walls or the south wall of a building, often a monastery or other church related building. Some of the earliest bee-boles in Scotland can be found at Pluscarden Abbey in Moray, dating from the 13th century. Purpose-built bee-houses, for skep/hive protection and storage, were popularised during the mid 19th century as general interest in honey production increased in line with a greater understanding of the bee's role in pollination. Around this time, the wide-spread manufacture of wooden box hives also accelerated, eventually replacing the use of the traditional straw skep.

Many of the surviving 19th century bee-houses in the UK are of an individual bespoke design. It may be that the Tayfield bee-house is a standardised example by an established manufacturer of hives and bee-houses. There are currently five bee-houses in Scotland recorded on the national bee-bole register including Tayfield. The other four are built of brick or stone rather than timber.