Alloa Sheriff Court and Justice of the Peace Court

A Category B Listed Building in Alloa, Clackmannanshire 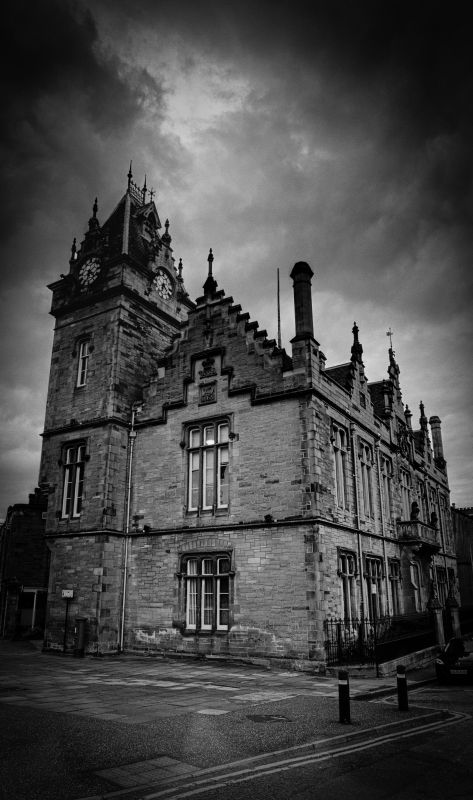 Brown and Wardrop, dated 1863-1865; additions to Drysdale Street by William Kerr, dated 1910 and 1938. 2-storey and basement, 7-bay, Franco-Scots baronial, rectangular-plan, symmetrical court house with engaged 3/4-stage square clock tower to the northeast corner. 2-storey and basement office L-plan block to east and adjoining the former police station is not considered of special interest in listing terms at time of review.

Principal (west) elevation of 1860s block has basket-arched doorpiece flanked by stepped buttresses supporting balustraded balcony at first floor, with moulded corbels to end, arcaded parapet with corner piers topped by carved lions holding shields with crosses of St Andrew and St George. Crowstepped gable above with carved Royal Arms between decorated angled finials with griffons at base and lion rampant supporting a weathervane at the apex. Centre gable flanked by smaller similarly detailed gables with carved panels. Hexagonal corner chimneys. North gable with date under monogram of Queen Victoria. South gable with carved stone panel, one bearing monogram, the other a crest.

Tower at northeast corner with splayed angle corbelled to square at first floor and corbelled circular turret rising between first and second floor at the east corner. Parapet rising at centre into gablets with clock by Ritchie and Sons of Edinburgh. Steeply-pitched, piended fish scale slate roof with bargeboarded lucarne to west pitch.

The 1910 block to Drysdale Street is a 2-bay, 2-storey block with further 2 bays added in 1937. Flat arched, tripartite and bipartite windows, with moulded stone mullions and transoms. 3-sided oriel window to north east corner. This 2 storey block is linked to 1860s court house by a set-back 2-storey single bay section with carved panel over entrance door.

The interior was seen in 2014 and is arranged around a double height courtroom (courtroom 2) at first floor with timber fixtures. Half-turn staircase with landings and barley sugar cast iron balustrade. Lift at centre of staircase. The stairwell is lit by tripartite window and has a coved and ribbed ceiling. Courtroom 2 with panelled timber Judge's bench, witness box, dock and well barrier and painted timber boarding to dado to walls. Round arched alcoves to wall behind bench. Replacement public seating. Hammer beam timber roof trusses springing from stone corbels. Large ornamental brass fittings for gas lamps to roof ventilators. Courtroom 2 at ground floor (former sheriff clerk's office) has an iron fireplace with timber surround. Predominantly panelled doors and window ingoes and shouldered architraves.

Alloa Sheriff Court is a significant example of 19th and 20th century civic architecture and forms a focal point in the streetscape of Alloa town centre. First designed in 1863-5 by the prolific court architects Brown and Wardrop and built by a local mason John Mailer, with stone from Dunmore quarry, it is elaborately detailed with carved panels to the gables, and has an imposing doorpiece and landmark clock tower. The interior is also of high quality, retaining some of its mid-19th century decorative scheme, including finely detailed timberwork to the principal courtroom.

Alloa became the seat of justice for Clackmannanshire in 1822. The court was previously accommodated in the old Alloa Assembly Rooms (demolished) and in 1842 at the Tontine Hotel (now known as Ochil House, see separate listing), which was remodelled for the purpose of administering justice. This soon became unsuitable and on the 14 April 1863 the Commissioners of Supply approved the construction of a new court house.

Alloa Sheriff Court was designed by Brown and Wardrop in 1863 and was formally opened on 8 December 1865, at a cost of £8,000. The building was extended along Drysdale Street in 1910 to provide a police station with a further 2 bays added in 1938, all designed by local architect William Kerr of John Melvin and Sons. The 1910 former police station to Drysdale Street is plainer in design, with an absence of elaborately carved stonework, but has some similar Scots Baronial detailing to be in keeping with the earlier court house, such as the crowstepped gables and the corbelled out windows to the corners.

James Maitland Wardrop (1823-1882) was articled to Thomas Brown, becoming a partner in the practice in 1849. As architect to the Prison Board of Scotland, Brown had extensive experience in designing county court houses and prisons, the design work of which Wardrop gradually took over, including the court houses of Wigtown (1862), Forfar (1869) and Stirling (designed 1866, built 1874) (see separate listings). The practice was also highly successful at remodelling and designing country houses, with their work accomplished examples of the Franco-Baronial style and later pioneering examples of neo-Georgian. Their Franco-Baronial style was undoubtedly influenced from previously working in the office of David Bryce, and Wardrop became a serious rival to him.

The development of the court house as a building type in Scotland follows the history of the Scottish legal system and wider government reforms. The majority of purpose-built court houses were constructed in the 19th century as by this time there was an increase in the separation of civic, administrative and penal functions into separate civic and institutional buildings, and the resultant surge of public building was promoted by new institutional bodies. The introduction of the Sheriff Court Houses (Scotland) Act of 1860 gave a major impetus to the increase and improvement of court accommodation and the provision of central funding was followed by the most active period of sheriff court house construction in the history of the Scottish legal system, and many new court houses were built or reworked after this date.

Court houses constructed after 1860 generally had a solely legal purpose and did not incorporate a prison, other than temporary holding cells. The courts were designed in a variety of architectural styles but often relied heavily on Scots Baronial features to reference the fortified Scottish building tradition. Newly constructed court buildings in the second half of the 19th century dispensed with large public spaces such as county halls and instead provided bespoke office accommodation for the sheriff, judge and clerks, and accommodated the numerous types of court and holding cells.

The L-plan 2-storey and basement office block to the rear (east) and adjoining the former police station has been comprehensively refurbished to the exterior and interior and this part of the building is not considered of special interest in listing terms at the time of the review (2014-15).