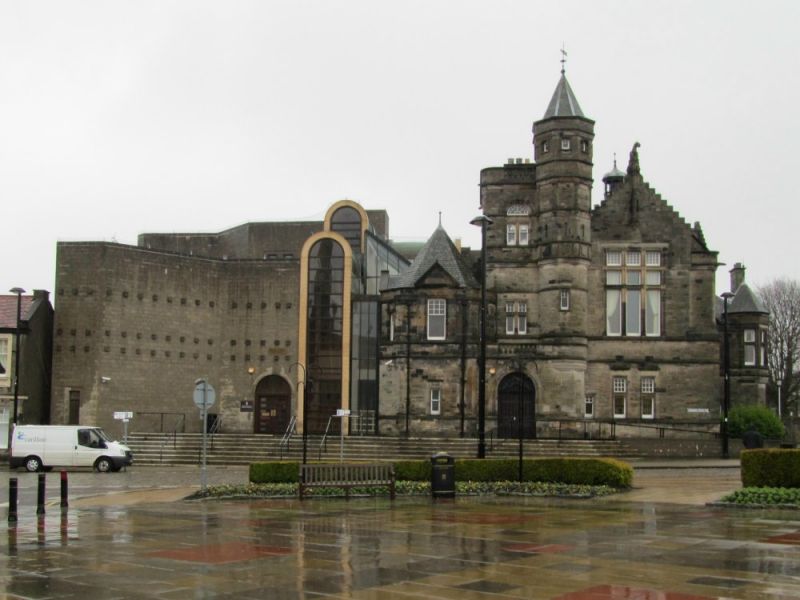 Kirkcaldy Sheriff Court dates from 1893 and is a significant example of civic architecture of the period, representing a late flourishing of the Scots Baronial style. Built in high quality materials, the court has good stonework details with a prominent tower and turret, crowstep gablets, ornate finials and balustraded parapets, all adding considerably to the architectural interest of the streetscape. The building makes effective use of its corner site with windows of the principal courtroom at first floor clearly articulated on both street elevations and forming a focal point in the town centre. Internally, the court has been moderately altered and retains some of its original courtroom components and decorative features, such as a decorative plaster ceiling to the principal first floor courtroom.

Kirkcaldy Sheriff Court was built in 1893-94 to plans by James Gillespie, and is was among the last court houses to be built in the 19th century. This purpose-built court house replaced the 1826 townhouse and jail (demolished early 20th century), which was at the junction of High Street and Tolbooth Street. The exterior form of the north, west and south elevations of the 1893 building remain largely unaltered.

The building cost £9000. On the occasion of its opening on 21 May 1894, County Sheriff Mackay noted that the town 'now had a building in which its varied duties could be conducted with the greatest efficiency' and described the building as a 'handsome structure of decided ornament to the town" (Glasgow Herald, 22 May 1894, p10).

James Ross Gillespie was an accomplished and successful Fife architect, in practice with James Scott after 1885, and operating from St Andrews, where the majority of their work can be found. Gillespie's earlier work in Kirkcaldy included the famous Linoleum Works for Michael Nairn in 1883. Kirkcaldy Sheriff Court was one of Gillespie's most prestigious commissions. Scott joined James Gillespie on 11 November 1885 and the practice grew rapidly throughout the 1890s with major commissions for the University of St Andrews and St Leonard s School, and substantial additions to the Royal & Ancient Clubhouse in St Andrews.

The development of the court house as a building type in Scotland follows the history of the Scottish legal system and wider government reforms. The majority of purpose-built court houses were constructed in the 19th century as by this time there was an increase in the separation of civic, administrative and penal functions into separate civic and institutional buildings, and the resultant surge of public building was promoted by new institutional bodies. The introduction of the Sheriff Court Houses (Scotland) Act of 1860 gave a major impetus to the increase and improvement of court accommodation and the provision of central funding was followed by the most active period of sheriff court house construction in the history of the Scottish legal system, and many new court houses were built or reworked after this date.

Court houses constructed after 1860 generally had a solely legal purpose and did not incorporate a prison, other than temporary holding cells. The courts were designed in a variety of architectural styles but often relied heavily on Scots Baronial features to reference the fortified Scottish building tradition. Newly constructed court buildings in the second half of the 19th century dispensed with large public spaces such as county halls and instead provided bespoke office accommodation for the sheriff, judge and clerks, and accommodated the numerous types of court and holding cells.

The 1979 extension to the east by Property Services Agency is not considered to be of special interest in listing terms at the time of the review (2014-15).