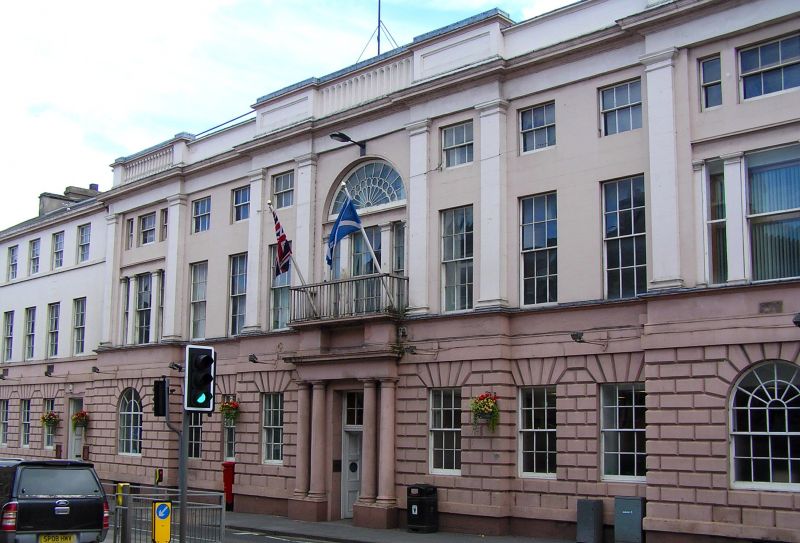 Former courtroom block (circa 1817) to the left is two-storey and basement, five-bay, plainly rendered with single door to outer-right bay and cill course to upper window level. Interior alterations by William Burn in 1836, including remodelling of former courtroom at 1st floor.

Addition to the far left (1925) is three-storey and basement, nine bay, with slightly advanced outer bays having round-arched windows to ground floor. There are tripartite windows above, in a similar style to the council chamber block.

The interior was seen in 2014. The county chambers and former courtroom at first floor level survive largely intact. The main council chamber has bowed ends with fluted Doric pilasters to ceiling height and a moulded cornice. There is a basket-arched minstrel's gallery with balcony to the south wall above the entrance double doors, flanked by fireplaces. Curved timber double doors at both ends of the room lead to a reception chamber room to the west and a former library to the east. The 1836 courtroom by William Burn has a segmentally-arched panelled plasterwork ceiling with central roundels and ribs terminating over full height Roman-Doric pilasters. Basement (former cells) have corbelled vaulted ceilings, stone fireplaces and studded timber doors. An engraved panel above the fireplace quotes Hamlet There is nothing either good or bad, but thinking makes it so. To me it is a prison . Other areas of the building have fittings of various dates including a boarded timber open-well staircase with decorative timber newels.

Four-storey office additions to the rear of the County Buildings, designed by John Needham in 1947 and erected between 1950 and 1955, and single storey brick addition, circa 1920 to the east, are not of special interest in listing terms.

In accordance with Section 1 (4A) of the Planning (Listed Buildings and Conservation Areas) (Scotland) Act 1997 the following are excluded from the listing: 4-storey offices and police station adjoining to rear and single storey block to east.

The Cupar County Buildings is a major example of civic architecture combining historical functions of council chamber and court house. The principal 9-bay block of 1810-1817 is an early example of the neo-classical work of James Gillespie Graham. This style is broadly mirrored in the design of the 1924-5 addition to the east (built to a 1907 design). The building is well-detailed externally with a large Diocletian window, pilasters, moulded architraves and a balustraded parapet. The Roman-Doric columned door piece provides an appropriately imposing entrance. As a whole the buildings form an impressive suite of county buildings that contribute to an architecturally rich area of civic buildings in the town of Cupar.

In accordance with Section 1 (4A) of the Planning (Listed Buildings and Conservation Areas) (Scotland) Act 1997 the following are excluded from the listing: 4-storey offices and police station adjoining to rear and single storey block to east.

The earliest parts of the Cupar County Buildings were built on St Catherine Street in 1815-17 as the County Hall. The footprint of the Cupar County Hall and the former court room to the left are depicted on John Wood's map of 1820 as 'County Hall Court House'. St Catherine Street was developed by Provost and banker, John Ferguson, who is understood to have hired James Gillespie Graham to design the building in 1810. The opposite end of St Catherine Street is terminated by the 1815 former burgh hall (see separate listing). After Ferguson was bankrupted in 1817, the street was further developed by architect-builder, Robert Hutchison. The main elevation of the County Buildings appears to have been influenced by the work of Robert Adam in Edinburgh s New Town where similar designs were used as the centrepieces of terraces (Buildings of Scotland, p165). A 9-bay addition was added in a similar style in 1925 following a 1907 design, and mirrors the form of the earlier 1815 block.

The development of the court house as a building type in Scotland follows the history of the Scottish legal system and wider government reforms. The majority of purpose-built court houses were constructed in the 19th century to address an increase in the separation of civic, administrative and penal functions. The resultant surge of public building was promoted by new institutional bodies. The introduction of the Sheriff Court Houses (Scotland) Act of 1860 led to the most active period of sheriff court house construction in the history of the Scottish legal system. Many court houses were built or reworked after this date. The design of court houses in the early 19th century tend towards neoclassical or Renaissance styles of architecture to convey their status as important public buildings.

The former Fife Regional Council office additions to the rear of the Cupar County Buildings, designed by John Needham in 1947, were erected between 1950 and 1955. They are part of an uncompleted design that was to include a central semi-circular debating chamber within a circuit of offices forming a kite-shaped plan. The paired-back and orderly treatment of the built elevations, and arrangement of windows, draw inspiration from authoritarian forms of Modernist office design from the 1920s and '30s. The interiors were partly remodelled in 2013 to form open plan office space. The offices, in their uncompleted form, are not considered an innovative or defining example of post-war civic architecture or office design and have been excluded from the listing. The plain, single storey brick block of around 1920 to the east of the site is also excluded from the listing.

Internally, the bow-ended principal county chamber/assembly room on the first floor is of particular note with fluted pilasters, minstrels gallery and twin fireplaces. The interior of the later court house in the 1817 section was refitted as a courtroom in 1836 by the nationally significant Scottish architect William Burn and features a good segmentally-arched plasterwork ceiling with anta pilasters. This section is linked to the 1924-25 section internally at first floor level with doors between the former courtroom and jury room and a corridor leading to the former sheriff's room. There have been various changes to secondary interior spaces in response to shifting systems of local government and administration, and the changing functional requirements of the building in the late 20th and early 21st century.

The neoclassical main (1815-17) block to the west and the 1907-25 block to the east of this conjoined range were internally reconfigured as part of 19th and 20th century reorganisation of functions within the building. The plan form of the building has been largely determined by the existing streetscape.

Scottish architects began to use Renaissance and neo-classical styles for public buildings at the beginning of the 19th century to convey their status in a manner distinct from the earlier tolbooths and town hall architecture of the 18th century. The 1815 section of the Cupar County Buildings is an early example of neoclassical design with quality detailing including a Diocletian window and pilasters, moulded architraves and balustraded parapet. The Roman-Doric columned door piece provides an appropriately imposing entrance to the building. The later additions to the left are sympathetically design to compliment the main council chamber block, to form a palatial suite of county buildings. The 1817 section to the left was later refitted as a courtroom in 1836 by the nationally significant Scottish architect William Burn with a fine segmentally-arched plasterwork ceiling with anta pilasters.

James Gillespie Graham (1777-1855) was one of Scotland's most influential 19th century architects. Associated early in his architectural career with the renowned Gothic Revival architect A W Pugin, Gillespie Graham had considerable success providing designs in a range of classical, gothic and castellated styles. Although perhaps best known for his Gothic work, the neoclassical County Buildings at Cupar was one of his first major commissions. Other county buildings and court houses in Scotland by Graham include Inveraray of 1819 (LB35030) and Dumbarton of 1824 (LB24875).

The court house is sited at the junction of the old and new town of Cupar. Its classical elevation has significant streetscape presence in Cupar as part of a long continuous row of classical buildings in the town, and it adds considerably to the character of the wider townscape. It contributes significantly to an architecturally rich area of civic buildings within the town of Cupar with the opposite end of St Catherine Street being terminated by the former burgh hall (see separate listing).

There are no known associations with a person or event of national importance at present (2018).