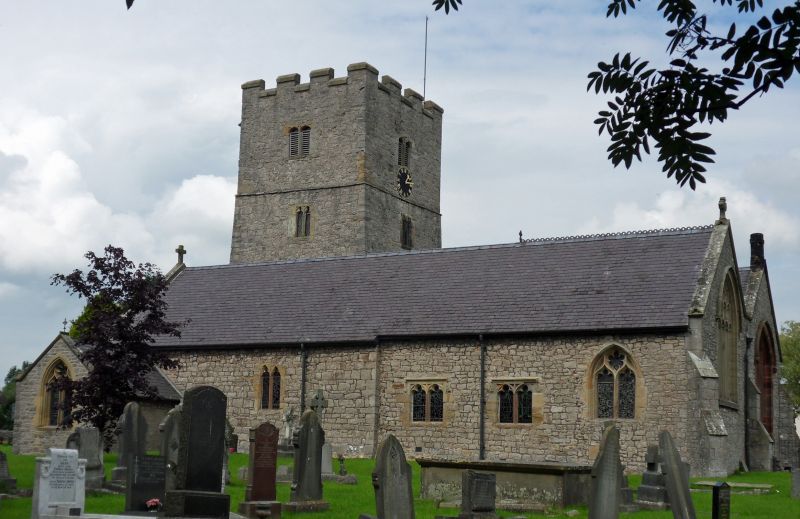 Location: At the centre of a large square churchyard on the SW side of the town, with the main entrance from Pen y Cefn Road.

The church is first mentioned in 1244 but the earliest parts of the present building are late C13, comprising nave and tower, from approximately the time when Caerwys was granted its borough status in 1290. The present chancel was added in the C14. The N aisle is later still but was modified in the late C15 or C16 when the present N aisle roof was constructed. The tower was heightened probably in 1687 and repaired in 1769. Restoration in 1894-5, by W.H. Spaull of Oswestry, included replacement of wooden piers to the N aisle arcade by the present 2-bay chancel arcade, although a single arch between nave and N aisle was retained. The W porch and SW vestry are both dated 1904.

A mixed but mainly Perpendicular and Tudor-Gothic style church. The nave and slightly narrower 3-bay chancel are of equal length and are under a single roof. In addition there is a SW vestry, W porch, and a N aisle under a separate roof with the tower at its W end. Of rubble-stone walls with yellow freestone dressings, and slate roof behind coped gables. The nave has a single C14 2-light S window with cusped lights, while the SW vestry has a 2-light Perpendicular S window. The chancel roof has crested ridge tiles to its 2 E bays only (reflecting the internal shortening of the chancel in the early C20). It has 2 hooded 2-light square-headed windows with sunk spandrels, with a 2-light Perpendicular window further R, all partly renewed. Beneath the R-hand window is a stone tablet with Latin inscription commemorating Robert Evans of Caerwys (d 1582). The SE angle has a diagonal buttress. The 5-light late C19 Perpendicular E window has arched tracery lights, and a hood mould. A stepped buttress is between chancel and N aisle, with diagonal buttress to the NE angle. The N aisle has a Perpendicular 5-light E window under a 4-centred head with cinquefoiled lights. Beneath the window are concrete steps to the boiler room. On the N side is a 2-light square-headed window at the E end, which has cusped lights, while in the centre is a renewed similar 2-light window but with arched lights, both windows having sunk spandrels. At the W end is a pointed doorway with boarded door enriched by studs and with original handle and escutcheon, inscribed 'TP RW 1780'. On the E side of the tower is the creasing of the earlier N aisle roof, of steeper pitch.

The 4-stage unbuttressed tower is battered at the base, and is of rubble stone with bigger dressed quoins. The lower 2 stages have narrow slits in the W and N faces. The third stage has, in each face, a C17 2-light window with sunk spandrels and cusped lights. The C17 upper stage is slightly narrower, and is above a thin band. The W and E faces have round clock faces of 1913, above which are the 2-light belfry windows with sunk spandrels and louvres, and the embattled parapet. The W window of the nave, above the porch, is a 2-light Perpendicular window of C19 form. The porch has a moulded lintel and double iron gates. Inside, the W door to the nave has a Tudor arch and boarded door with strap hinges.

The nave has a 4-bay arched-brace roof incorporating medieval timber. Beyond the simple plastered chancel arch the chancel has a 3-bay collar-beam roof with cusped raking struts and principals on corbels. The S side of the sanctuary has a C14 cinquefoiled tomb recess with a broken effigy of a woman of late C13 or early C14, traditionally said to be the wife of Dafydd ap Gruffydd, brother of Llewelyn Fawr. A 2-bay N chancel arcade, of 1894-5, has an octagonal pier and 2 orders of chamfer. A lower and narrower arch is further L in the nave. The N aisle has a restored late medieval 8½-bay arched-brace roof, on the S side resting on late C19 stone corbels. The SW vestry has a pointed doorway, which was the main entrance to the church before the W porch was added.

In early C20 reorganisation of the interior the chancel is effectively now only the 2 E bays, including the sanctuary in the E bay, and is separated from what is in ritual terms the nave by a low panelled screen. It incorporates panels re-used from family pews, including 2 inscribed 'WHM 1682', and another 'HG 1684', as well as vine trails and a quatrefoil frieze re-used from the cornice of the late-medieval chancel roof and noted by Sir Stephen Glynne c1839. The polygonal pulpit is an integral part of the dado and also incorporates re-used woodwork. The octagonal font has disc ornament to the facets, the E of which is inscribed '1661 INIR', and has an iron-bound cover. It is in the N aisle against the W tower wall where fragments of C14 sepulchral slabs were set up in 1904. The N aisle has 2 Decalogue boards and a Royal Arms of George I. The chancel reredos, a 1914-18 memorial, has canopied niches with figures of saints, in late medieval style.

Many windows have stained glass. In the chancel the E window of 1908 shows the Crucifixion and is by Joseph Bell & Son of Bristol. The SE window has medieval fragments; the middle window in the S wall is a war memorial with SS David and George and the SW window depicts Mary and Elizabeth, dated 1936 by Henry Dearle of Morris & Co of London. In the N aisle the E window shows the Ascension, of c1923, while the N window shows the presentation of Jesus at the Temple, of c1920. In the nave the S window shows the Annunciation, c1936. The W window, by Celtic Studios of Swansea of 1959, depicts the presentation of the royal decree to hold an Eisteddfod at Caerwys in 1523.

There are also numerous memorial tablets. The chief are a pair of contemporary classical wall tablets on the nave S wall. Both have slate inscription panels to freestone tablets with cherubs at the base. The tablet on the W side has a broken segmental pediment with cartouche and commemorates Thomas Lewis (d 1751), while the tablet on the E side has an open pediment and commemorates Samuel Mostyn (d 1751).

Listed grade II* as a substantial medieval church with interior medieval detail including roofs and tomb recess, and substantial post-medieval work including the fine tower.