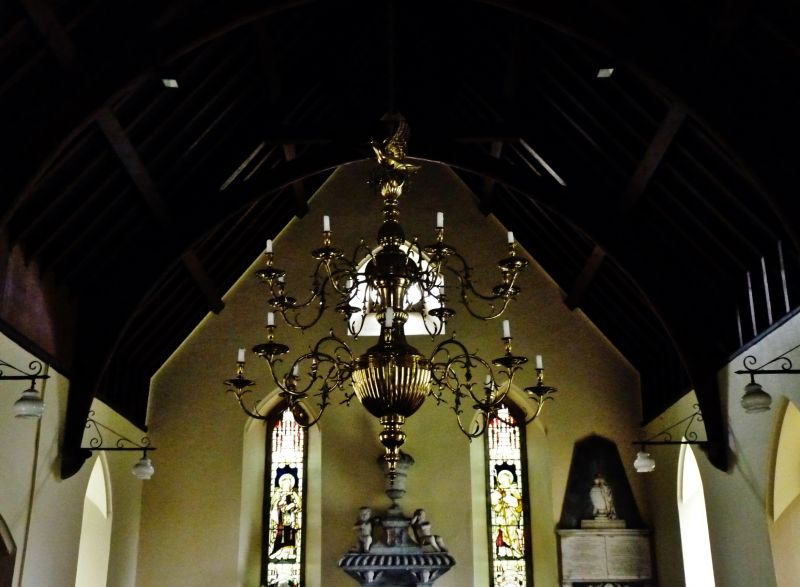 Location: At the northern end of the village set back from the road.

Built 1852-3 by T.H. Wyatt, architect of London, replacing an earlier church on the site. Some monuments and glass were salvaged from the old church and set up inside the new building.

An Early English style church comprising nave with lower and narrower chancel, SW tower and spire and S vestry. Of snecked dressed stone, lighter freestone dressings and slate roof. Nave and chancel have a moulded stone eaves cornice and coped gables. The nave has two 2-light windows with plate tracery in its S wall, and a projection over the boiler room. The S vestry has an end freestone stack. In its W wall is a pointed doorway with boarded door and strap hinges. The S and E walls both have 2 cusped windows. The chancel has a hooded lancet window R of the vestry and an angle buttress with gabled offset. The E window is 3-light with plate tracery. The N side of the chancel has 2 cusped windows and angle buttress similar to the S side. The N wall of the nave has 2 main bays divided by buttresses, each bay having a 2-light plate-tracery window with single cusped window to its R. The W wall of the nave has a central gabled buttress flanked by cusped windows with sill band, and with a sexfoil window above.

In the 3-stage tower the lower stage houses the porch, and has a hooded pointed doorway with double panelled gates. In the W wall is a small quatrefoil window. The second stage has narrow cusped windows in the E and W walls. The upper stage is narrower above an offset. Each face has 2 cusped belfry openings with louvres and linked hoods. Above the belfry windows is a nailhead frieze. The broach freestone spire is crowned by a weathervane.

The S doorway has a continuous chamfer and hood mould, and a boarded door with strap hinges. The nave has a 4-bay arched-brace roof on corbels. The chancel arch has 2 orders of chamfer dying into the imposts. The chancel has a 3-bay roof with polygonal boarded ceiling, painted over the sanctuary, and has ribs with foliage bosses. A 2-centred arch to the S vestry has a continuous hollow moulding. The sanctuary is laid with Minton tiles. The reredos, dated 1863 and in early C13 style, has a central blind arcade behind the altar of 3 cusped arches under crocketed gables. Shafts are of marble, with alabaster panels. Under the central gable is a carved dove, while the flanking panels incorporate mosaic 'Alpha & Omega' and 'HIS' monograms. The central arcade is flanked by 3-bay blind arcades at a lower level, the spandrels of which have relief foliage in roundels, but otherwise with similar marble shafts and alabaster panels.

The octagonal font has sexfoil panels to alternate facets. The pulpit has a polygonal front with arcading. Pews have plain ends. The choir stalls have ends pierced by carved quatrefoils, and fronts with wooden rails on twisted iron uprights. The communion rails are similar.

Artistically and historically, the most significant interior fitting is a marble monument to Charlotte Mostyn (d 1694) against the nave W wall, by Grinling Gibbons. It has a panelled base with memorial inscription and flanking pilasters. Cherubs are at the base of a gadrooned sarcophagus. The sarcophagus is surmounted by a flaming urn on a plinth decorated with the Mostyn family arms, and flanked by 2 more cherubs. The monument is mounted on an earlier grave slab. To its R is a wall monument to Watkin Williams (d 1808) and his wide Elizabeth (d 1825), of white on black marble, surmounted by a draped urn, by S & F Franceys. The chancel N wall has a Gothic wall tablet commemorating Annabella Puleston (d 1824) by John Carline II. In the nave S wall are 2 lozenge shaped brass memorial plaques to William Barber Buddicom (d 1887) and Marie Jeanne Buddicom (d 1892) by Cox & Buckley of London.

Most windows have stained glass, of which 5 are coeval with the church and are by Charles Gibbs of London. The signed E window shows Gethsemene, the Last Supper, Crucifixion and Resurrection. The 2 N chancel windows, commemorating Flora Williams (d 1847), show a child in heaven and the Good Shepherd. The sexfoil window in the nave W wall shows the Royal Arms and is dated 1853. Other glass is not attributed. The chancel S window has 'suffer little children' of c1894. In the nave N wall is a window with a Celtic cross, W of which are SS David and Elizabeth of 1894, and E of which is a Royal Arms of c1500 in the tracery light. The W windows depict the Good Shepherd and Christ as the light of the world, of c1892.