A Grade I Listed Building in Llangollen, Denbighshire 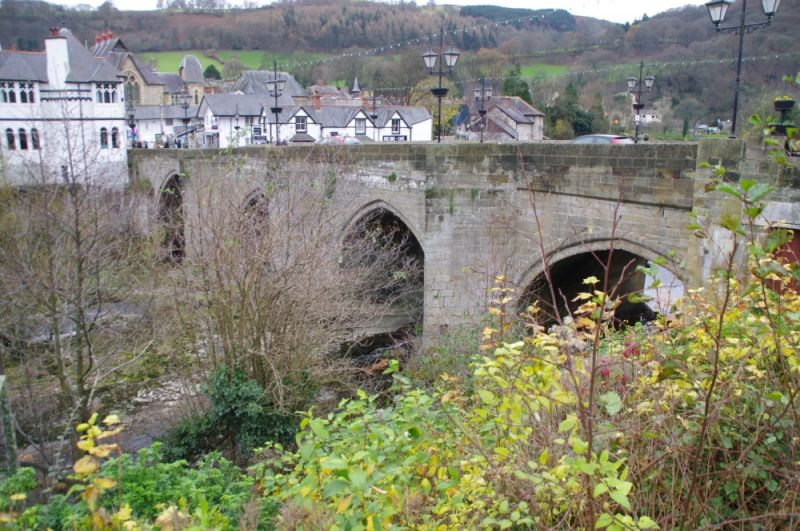 Location: Spanning the River Dee at the N end of the main street.

The present bridge was probably begun in C16 although records show that there was a crossing here in 1284; this may have been built soon after the foundation of Valle Crucis Abbey. Traditionally the present structure has been attributed to John Trefor (Bishop of St Asaph 1346-1357) and is described as one of the Seven Wonders of Wales. This reference may infact mean to refer to Bishop John Trefor II (Bishop of St Asaph 1395-1411) who was a local man of the house of Pengwern. Leland's Itinerary (1536-39) mentions a great stone bridge but it is highly questionnable as to whether this is the present bridge. Fragments of sepulchral slabs were embeded into the masonry which could suggest that the present structure was constructed after the Dissolution. Alternatively there is a strong case for believing that the 'Rondle Reade 1656' stone (now in Hall Street) refers to the construction of the existing bridge espeacially in view of the ú250 fee that he was paid for the work of that date.
On 11 May 1863 provision was made for the construction of the new railway station which entailed extending the bridge at the N end to span the railway line. In order to achieve the necessary height the roadway had to be ramped up towards N and so the parapets were rebuilt. A round castellated tower was also built at the NE corner - demolished in 1940. The width of the bridge was greatly widened on the upstream side 1873 and in 1968 it was again nearly doubled in width to the same side.

The river is spanned by 4 arches, unequally pointed and with voussoirs. Coursed rubble to older part, precast concrete to upstream side. Deep pointed cutwaters to both sides (taller to downstream side). Square headed railway opening.

The bridge is also a scheduled ancient monument.