A Grade I Listed Building in Gresford, Wrexham 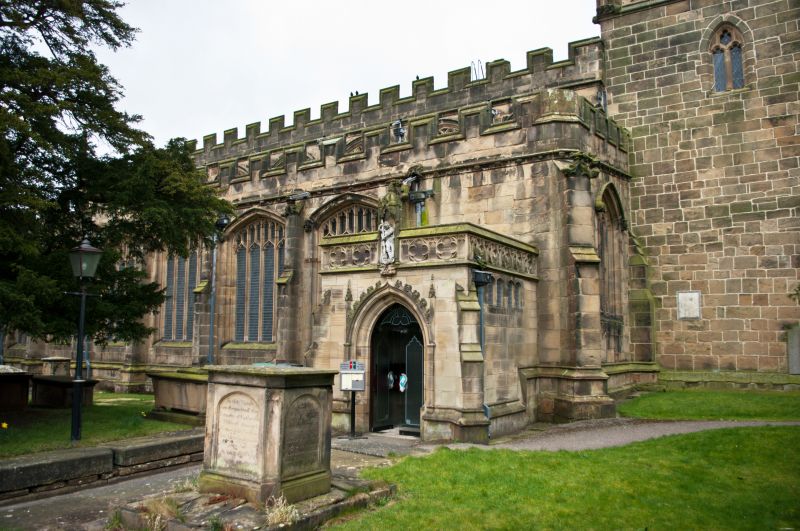 Location: Set in rectangular churchyard at the centre of the village.

A church is recorded in the Domesday Book, later records date from 1254 and 1333 and are consistent with evidence of C13 and C14 work which survive. The church was almost wholly rebuilt in C15. Glass was given in 1500 by Thomas Stanley Earl of Derby. There is evidence for a processional route at the E end between the two chapels and behind a reredos thought to have been formed by the original E end of the C14 church, this was subsequently removed, the passageway was boarded over and the altar placed against the E wall. The arrangement has been linked with sources suggesting that the church had a miraculous relic or statue which attracted pilgrims. Restorations and alterations include work of c1820, by Street 1865-7, when the part of the tower was largely rebuilt following a collapse; and by Caroe, 1913. The N porch was added 1920-21.

The church is of uniform C15 build and design retaining some earlier features. It is of Cefn Sandstone with slate roof. Rectangular plan with a W tower and N and S porches, unbroken aisled nave and chancel. The windows are generally Perpendicular; 7 tall 4-light windows with traceried heads to each side, a 7-light E window flanked by smaller windows to chapels, that to the N is more elaborate than the others. There is a curvilinear C14 window in the W end of the S aisle. Clerestory windows have 4 cusped lights except those in the easternmost bay which have 3 lights. Parapets are embattled, the aisles have string courses with flowers, masks and animals. The tower has a C14 base and this is divided from the later work by a band of quatrefoils. There are paired traceried bell-openings with crocketed ogee headmoulds, and a panelled parapet with crocketed pinnacles alternating with statues.

This lacks structural division and there are continuous arcades of 7 bays, the easternmost bays in the aisles being devoted to chapels. An uninterrupted camberbeam roof of fine quality is panelled and has fluttering angels; the aisles have simpler roofs. at the E end the arcades stop short of the easternmost bay from which point they continue as solid walls pierced on each side by arched openings. Doorways above these formerly led to a gallery over a reredos. There is a vestry beneath a boarded floor and a vaulted crypt runs beneath the chancel. The present sanctuary is largely Caroe's work. The N chapel has a canopied niche set in the E wall supported by a grotesque head, the S chapel has a cusped ogee piscina with a crocketed gable in the S wall.

1
There is a fine set of medieval furnishings including a chancel screen attributed to the Ludlow workshop and parclose screens and N and S chapel screens of similar, somewhat simpler design. There is a set of 14 stalls and 11 misericords with traditional carved designs. The font is octagonal with a traceried stem and carved panels. Later furnishings include two fine C18 chandeliers, a pulpit by Street, 1865; organ by Hill & Son, 1912 and a reredos by John Douglas, 1879.

Stained Glass: Medieval glass of c1500. N chapel E window of 1498 has scenes from the lives of St Anne and the Virgin; N window has scenes from the life of the Virgin. S chapel E window has depictions of St Apollonia, St Anthony, St John the Baptist and others. Later work includes windows by Lobin of Tours, Clayton & Bell, Heaton, Butler & Bayne and Kempe, some with medieval glass in the tracery.

Monuments: There are a number of C16, C17, C18 and C19 monuments, some of high quality. The most notable include late C16 and early C17 Trevor memorials in the S chapel. Later monuments include works by Chantrey, Westmacott, Alexander Wilson Edwards of Wrexham and a life-size female figure by Theed, 1851.

Group value with enclosed graves in the graceyard, the graceyard wall and gatepiers, with Achill, Church House and Strode House and with All Saints School and Schoolhouse.

Listed grade I as an exceptional example of a late-medieval church with fine medieval glass and furnishings.