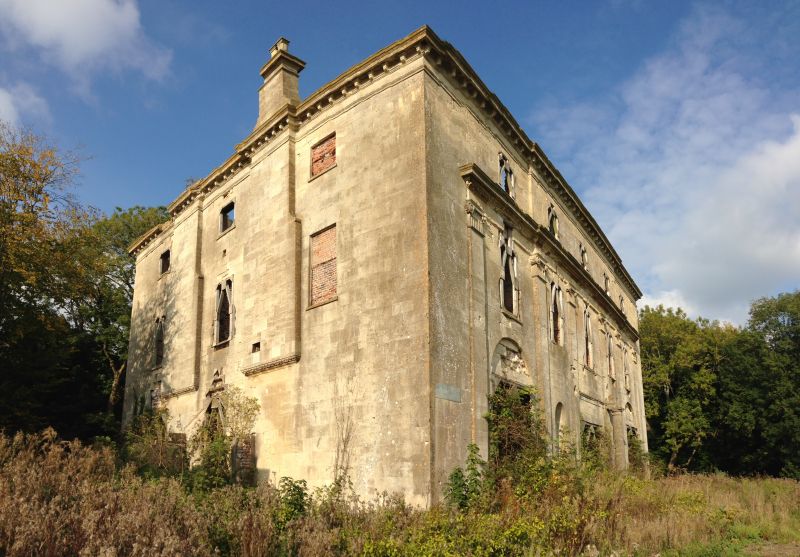 Location: About 1000m to the north east of the Lion Gates situated at the roundabout where the A466 crosses the B4293 and approached by a long track from them.

The house at Piercefield previous to the present one dated back in origin to the Middle Ages, but it was probably a mainly C16/C17 one when the estate was purchased by Valentine Morris in 1736 (or possibly 1740). Coxe recorded a chimneypiece dated 1553 when he visited before 1801, and this presumably came from the old house. It was Valentine Morris's son, also Valentine, who was to lay out the walks which were to bring Piercefield such fame as a destination for discerning tourists in the late C18 and early C19. In 1736 the estate was some 300 acres (121.5 hectares), approximately the size of the present park within the wall. The elder Valentine Morris died in 1743, leaving the estate in trust for the younger Valentine Morris, who took over the house in 1752 and had extended the estate to 2130 acres (862.7 hectares) by the time he left in 1772, when he became Lieutenant-Governor of Antigua, having been bankrupted by the expenses of keeping up Piercefield and welcoming all the visitors to it. In 1784 it was finally sold to George Smith, the tenant since 1772, who then commissioned Sir John Soane to design a new house. His design was not used, but the house as built, designed by the local architect G V Maddox, is very dependent on Soane's ideas and is clearly similar to his Shotesham Park in Norfolk, which had been built 1785-8. The house was put up for sale unfinished (it had no roof) in 1793 when Smith was bankrupted following the failure of the Monmouthshire Bank (the sale particulars survive and record an estate of 2130 acres (862.7 hectares)), and it was purchased in 1794 by Colonel Mark Wood who pulled down the rest of the old house and extended and finished the new one, using the architect Joseph Bonomi, who designed the twin pavilions which flank the central block and which are now listed separately (qv), as well as adding the curving Doric portico (now gone) to the central block and the lavish interiors. Colonel Wood owned it until 1802 when it was bought by Nathaniel Wells, who died in 1852. It was he who built the lodges on the perimeter wall in 1833. Wells had not lived in the house for some years before his death and the tenant Thomas Thompson did not leave until 1856 when the estate was sold to John Russell of Wyelands who then sold to Henry Hastings Clay in 1861. It passed on his death in 1874 to his son Henry Clay, who died in 1921, and then to his grandson Charles Lee Clay, who moved from Piercefield to the new Wyndcliffe Court in 1922. The estate was then sold to the Chepstow Racecourse Company in 1925 and racing began in 1926. The dismantling of the house, with the removal of fittings, seems to have begun at this time, but the park was requisitioned in the war, and the house, which may have already been roofless and in ruins, was further damaged by American troops who camped in the park and are reputed to have used it for target practice. It is said to have been burnt, but there is little sign of this on the surviving walls. The rest of the estate was sold off, but the racecourse company continues to own all the land within the park wall including the ruins of Piercefield House, while the wooded cliffs and the walks are managed by Forest Enterprise.

The house is built of Bath limestone ashlar with internal walls of red brick. The front and side walls are largely complete, the rear wall is very largely gone and the roof is missing entirely. It is a large rectangular block with a five bay main front and four bay sides. It is now detached from the later pavilions which are listed separately.
The main south elevation is of two storeys with a full attic. The lower two floors are articulated by six gaint order Ionic pilasters carrying a full entablature; the bases, which are set on a plinth, are hidden by undergrowth. The pilasters are arranged 1 2 2 1, but the windows are arranged evenly with a much wider gap on the outsides than there is between them. The ground floor has three openings only. Wide outer windows with flat heads within an arched recess; these were tripartite windows with semi-circular tympana. The centre bay has a large square headed opening for centre doors and sidelights, but these, and the semi-circular Doric porch, have gone. Scarring and fragments remain with a Roman Doric column surviving on the right hand side of the opening. Between these bays are apsed alcoves for statues. The first floor has five tall openings for sash windows, all have lost their cills. The attic windows now stand on the cornice, they too have lost their cills. The centre three are set slightly forward. Secondary modillion cornice which continues down the return walls and went originally across the back also. The side elevations appear similar as far as can be seen behind the undergrowth; the east elevation is the clearer. This is in four bays, with the chimney stacks projecting between the outer and inner windows. The ground floor was blind to the main south room. The join to the pavilion was between the chimneys and seems to have been little more than a corridor. Photographs show this as a 5-bay arcade with a pitched roof. The rear room, probably the breakfast room, had a large square headed window. The first floor had four 6 over 6 pane sashes of which the south two survive. The attic floor had 3 over 3 sashes of which the most southerly one survives. Two ashlar stacks with weathered caps. The west wall appears to have been much the same, but is more damaged and only the front stack survives above the parapet. These stacks are corbelled out at first floor level and did not heat the ground floor rooms. This wall has only one window between the stacks, unlike the east one. The corridor to the pavilion was between the stacks as before. The rear wall is mostly collapsed as are the two storey service wings; walling with three window openings on each floor survives on the east side.

Nothing survives beyond the brick cross-walls. The rich interiors by Joseph Bonomi were dismantled after the sale to Chepstow Racecourse Company in 1925. In 1819 the Drawing Room, Dining Room, and the Saloon containing the main staircase were in the central block while the attached pavilions were the Library and Music Room.

Included at a high grade as the still impressive ruins of an important neo-classical country house, in the style of Sir John Soane, which remains the key component of the nationally important historic landscape of Piercefield Park.