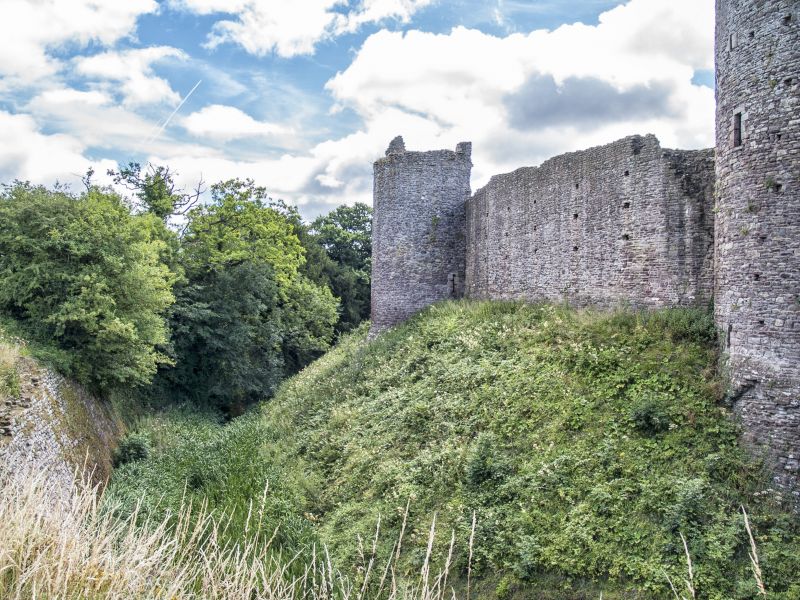 Location: Impressively sited on gently sloping ground overlooking the village of Llanvetherine and the undulating countryside beyond, some 3km NW of village of Llantilio Crossenny.

Following the initial conquest of the Welsh kingdom of Gwent by William Fitz Osbern, Lord of Breteuil in Calvados, between 1067-75, the Normans built a triangle of castles at Grosmont, Skenfrith and White Castle to control their newly won lands. These late C11 defences would have been of earth and timber. At White Castle the great outer ditch of that ringwork castle still survives, the perimeter of which would originally have been protected by a wooden palisade.

The earliest masonry structure at White Castle, built probably in the early C12, was a small rectangular keep- tower now demolished which stood within the inner ward. During the reign of Henry II, the surviving Exchequer Accounts record an expenditure of £128. 16s. on work at White Castle. This substantial expenditure must relate to the construction of the great six-sided stone curtain wall which encloses the inner ward.

In July 1201, King John granted the three castles to Hubert de Burgh, who was later was captured whilst fighting for King John in France. Whilst he was still prisoner John gave the castles to William de Braose of Abergavenny, in royal favour at the time. On Hubert's release, a prolonged dispute ensued over the ownership of the castles, but in December 1218 this was settled by the King's Court in Hubert's favour. After Hubert fell from power in 1232, he was forced to surrender the three castles which shortly afterwards reverted to the Crown and were placed in the charge of a royal officer, Waleran the German.

In 1244 Waleran built a new hall, buttery and pantry at White Castle. Shortly afterwards, in 1254, the three castles were granted to Henry III's elder son, later King Edward I.
White Castle played an important strategic role during the rising of Llwyelyn ap Gruffydd, Prince of Gwynedd in 1262. The Welsh conquered many of the English-held castles, but Abergavenny and White Castle, which did not fall, became important frontier fortresses.

As a defence against Llywelyn, White Castle was refortified in the military mode of the late C13. Great round towers were added at the angles of the curtain wall of the inner ward, and the earlier C12 keep was demolished and replaced by a new inner gatehouse. At the same time, the outer ward was enclosed by a formidable new curtain wall with massive corner towers and a new outer gateway. These works were carried out sometime after 1263, probably by Edmund, Earl of Lancaster, the younger brother of Edward I.

With the subjugation of Wales by Edward I, the strategic importance of White Castle declined and by the C16 the castle had fallen into ruin. In 1825 the Duchy of Lancaster sold the ruins to the Duke of Beaufort and in 1922 they were given to the state by Mr Henry Mather Jackson.

The surviving ruins at White Castle are built of uncoursed red sandstone, with ashlar dressings. They form the whole of the castle ground plan, including the walls and towers of both the inner and outer wards, and the walls of the twin-towered gatehouse. The present approach to the castle passes through the remains of the twin-towered outer gatehouse where the surviving walls rise to a height of approximately 5m. Side walls of outer gateway are grooved for a portcullis. Inner gate passage has guard chamber (left) with remains of chimney flue to upper fireplace. On right of gatehouse is a chamfered ashlar doorway with broach stops leading to short flight of stairs and ruins of a mural passage. Gatehouse passage opens into extensive outer ward, which is enclosed on N and W sides by the curved late C13 curtain wall which has three circular and one rectangular tower at intervals along its length. Surviving walling varies in height, from approximately 5m to 7m. Towers are all two-storey and have a windowless lower stage and arrow loops in upper stage. Masonry evidence suggests that upper wall of each tower was timber-framed. Upper stage of rectangular NW tower is arranged as a small lodging, with sloping hood of upper fireplace still visible.
The inner ward is a pear-shaped enclosure reached across a C20 bridge which spans a deep, water-filled moat with revetment wall. C13 gatehouse of the inner ward has two circular towers flanking gate passage; side walls of central entance passage are again grooved for a portcullis and side walls have drawbar holes. Masonry of towers and flanking curtain wall rise to level of former wall walk. Each tower originally had four stages and its own inner staircase. Staircase of NE tower has been destroyed but NW tower (to right of entrance) has Tudor arched entrance doorway leading to reconstructed staircase which rises to C20 wooden viewing platform. Basement and ground floor stages of tower have arrow loops with deeply splayed embrasures, the next stage is without windows and presumably served as a store. Little survives of top stage which rose above the level of the wall walk. NE tower (left) has been rebuilt but original layout was probably similar.
The gatehouse opens into grassed enclosure of inner ward. At opposing S end are foundations of early C12 stone keep which was demolished in later C12 when stone curtain was built. Original entrance to castle was probably sited next to the keep, protected by a large hornwork beyond the moat. Great stone curtain walls were built 1184-6 to replace earlier timber defences, and four circular flanking towers added c1260. Each originally had four stages. E central tower has a basement which is windowless (probably a store); ground stage has arrow loops; walls of next stage are blind; fourth stage formerly rose above level of old wall walk. W central tower is similar, but lacks a basement stage. The two S towers have arrow loops in splayed embrasures at basement level with two more loops at ground level, next stage is blind with uppermost stage now largely destroyed. Chancel of chapel was located at ground level in SE tower.