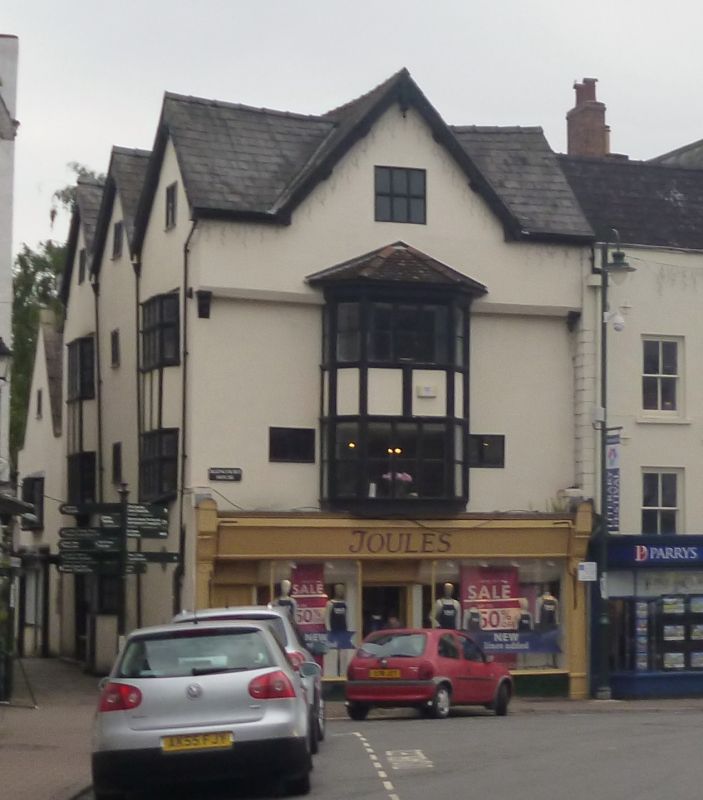 Location: In the town square in the centre of Monmouth.

Early C17, the date of 1624 is carved on the gable bargeboards flanking the pendant. The building was restored in the late C19 when the shopfront was added and the windows replaced, and it has been repaired in the late C20 with minor alterations.

Timber frame construction, roughcast and painted with a Welsh slate roof. Four storeys with one gable to the street and three to the left return and an additional gabled block (Going for a Song) attached at the rear. Upper floors overhang above a late C19 shop front which fronts the entire ground floor. This has a central door flanked by plate glass windows and the fascia is canted forward to accommodate the overhang. First and second floors have a canted oriel window through both floors with a rendered panel between, windows with 1 1 3 1 1 lights. The oriel is a late C19 or early C 20 reconstruction which closely copies the appearance of the original C17 one. The oriel is flanked on the first floor by small windows with 1 1 casements. The top storey projects again on brackets. Gable with plain bargeboards and a drop finial, dated W R 1624 at top.
The side elevation has all late C19 features in an otherwise rendered and painted wall. The ground floor has a small canted bay on the left. The first and second floors have canted oriels on brackets 1 3 1 leaded mullion-and-transom lights with rendered panels between. The oriels flank small 2 x 2 pane casements and there is one of these in each gable above. Bargeboards with drop finials as before.
Beyond the three gable section is a two storey one bay link which is probably C19. This has a doorway with hood on shaped brackets and a small casement above.
Beyond this, on the corner of the plot and originally free-standing is a square cross-gabled block of two storeys and attic which may originally have been a detached kitchen as was often the case with C17 timber framed town houses. This is also all rendered and has late C19 features. Shopfront with stall riser and narrow vertical panes, oriel with 1 3 1 lights above and small casement in gable, the return front has a 3-light shop window with oriel and casement as before. Coped gables.

The interior has been much altered. The ground floor is now supported by steel posts. The decorated bracket to support the front jetty can be seen in the shop window. The upper floors were not available at resurvey, but it is reported that little evidence for age is visible, but Kissack illustrates timber framing in the attic (p 17).
The rear portion (Going for a Song) which may once have been a detached block, shows no ancient features on the ground floor.

Included in a higher grade for its architectural interest as a rare early C17 town house in the region.