A Grade I Listed Building in Monmouth, Monmouthshire 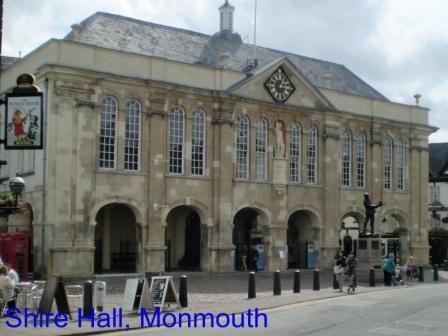 Location: In the town square in the centre of Monmouth with a cobbled area to the front and sides spreading as far as the line of the road and including the statue of CS Rolls.

Built in 1724 on the site of its 1571 predecessor and thought to have been designed by Fisher of Bristol whose only known building it is (see References). Philip Fisher, who lived in Monmouth and whose portrait is in the Shire Hall, is credited locally with the design although he was only twenty-two at the time (see Memorial in Church of St. Mary, Whitecross Street). The statue of Henry V by Charles Peart in the centre of the facade was added in 1792. The building was vested in the County in 1821 and following an Act for the Improvement of the Town Hall in 1829 it was extensively altered in 1829-30 with the addition of the staircase, courtrooms and the extension at the rear. The architect for this work was Edward Haycock of Shrewsbury. The Court Room was the scene of the trial of the Chartists who had marched through Newport in 1839 led by John Frost.
Monmouth ceased to be the county town for Monmouthshire in 1974 when Gwent was established, and the courts were moved to Abergavenny in 1997 with a resulting loss of purpose for this building, but the Monmouth Town Council does still meet here. Both the exterior and interior of the building remain largely unaltered from the C19 except that the eastern courtroom has been dismantled.

Limestone ashlar of Bath type with a hipped Welsh slate roof. Wren Baroque style which was already fairly old-fashioned for the date. Two storey rectangular block with 6 x 2 bays, the bays along the main facade (north) articulated by giant Ionic pilasters with paired pilasters at either end and none in the centre. Moulded stone cornice with blocks above the pilasters, 2-bay pediment at the centre, the parapet originally supported four vases, removed since the C19. Open arcaded ground floor, elliptical arched with keyed heads. The upper floor has pairs of semi-circular headed windows with architraves, imposts and keyed heads, 12 over 12 pane sashes; these have raised aprons linking them with the arches below. Statue of Henry V in armour with raised right arm ('in an awkward attitude', Coxe) at centre of first floor in niche matching adjoining windows with inscription beneath reading 'Henry V, Born at Monmouth August 9th 1387'. Above statue in centre of pediment a diamond faced clock in black with gilt figures and hands, this covers the original circular window. Central domed octagonal cupola carrying a lantern with four narrow 10 pane windows and a wind-vane. This stands over the 1830 staircase and is behind the hipped roof, while the C18 design had a cupola behind the pediment in front of the hipped roof.
The east elevation has two plain bays with only keyed and imposted openings, a band between floors and cornice and a plain parapet.
The west elevation has an additional bay with a recessed tripartite sash below paired sashes as before above and a canted wing of four single windows, arched below and plain above, 6 over 9 pane sashes, with an additional under storey to compensate for the falling ground. These additions are of 1830.
The rear of the building abuts the Beaufort Arms Centre (qv).

The ground floor is open under the original build and was used for market stalls. It is supported on two rows of rectangular piers with elliptical arches with plain circular columns in a cross line between. Stone paved floor, entry to basement cells on right. The rear section has three lower storeys, so these rooms are reached from the half landings. The 1830 staircase rises from the centre of the rear and goes in straight flights there-and-back under the lantern which gives top lighting to the upper flights. Stone stair with heavy iron balustrade, the top level has an unfluted Greek Doric arcade across one side which helps support the octagonal lantern. This has small pane lights, shell motifs in the squinches and a central feathered flower supported on narrow ribs. Stick baluster back stair with a mahogany hand rail also rises from the ground floor. The first floor retains the west court complete with the Edward Haycock fittings all in varnished pine, only the pediment over the Judge's seat appears later. Small gallery on one side; opening between massive square piers to the former public gallery, now blocked and the way down to the cells behind the dock has been covered over. The east court (now known as "The Henry Room") has been dismantled, but retains its small gallery and a framed tapestry, completed by the Monmouth Broderers in 2002, depicting the life of King Henry V; the Judge's robing rooms etc. survive above the courts. In the rear wing on the second floor are the plain Council Chamber and the Mayor's Parlour, both with C19 fireplaces. The cells may survive in the basement but these are now unreachable.

Included and highly graded as an exceptionally fine example of provincial Baroque architecture and (along with Great castle House) is one of the two finest secular buildings in Monmouth.