A Grade I Listed Building in Abergavenny, Monmouthshire 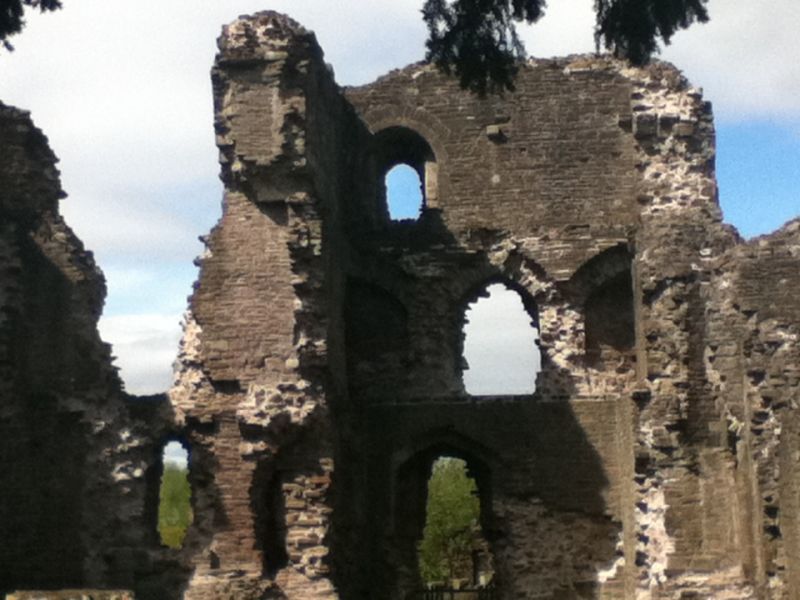 Location: Situated W off the main road on the southern approach to the town centre.

C12 earthworks from the castle of Hamelin de Ballon built in about 1090. The surviving masonry structures are from the C13 stone castle built by de Wallingford and its later extension in the early C15. Some of the walling dates from the earlier period, c1295-1319, while most of the circuit walls, with the remains of the Banqueting Hall and the South-west and South-east Towers date from c1403-09 as the Barbican probably does also. There are some fragments on the motte which may date from c1241, but this area seems to have very largely been reconstructed in 1818-9. Abergavenny Castle was the scene of the infamous massacre of seventy unarmed Welsh guests of William de Broase on Christmas Day 1175, but nothing of what survives can really be associated with this event as the castle was captured by the Welsh princes in 1182, recaptured by Reginald de Broase in 1215 and then destroyed following capture again by the Welsh princes in 1233. Rebuilt by the English to the end of the century the castle survived a siege by Owain Glyndwr in 1404 and was still in good condition at the time of John Leland's visit in the 1540s. In 1643 it was garrisoned for the Crown in the Civil War, then abandoned and slighted, then re-garrisoned for Parliament in 1645 and besieged in 1646, but stood firm. Following the end of the Civil War it fell gradually into decay. In 1818-9 the Marquess of Abergavenny built what was then The Court House (now Abergavenny Museum qv) as a hunting and shooting box; and it was later leased by other families. In 1881 the Castle was leased to The Abergavenny Improvement Commissioners and they converted it into what became a successful pleasure ground. It is still maintained by the local authority as a park but it is now displayed as an Ancient Monument rather than as a picturesque ruin within a garden.

Built entirely of Old Red sandstone rubble, roughly coursed, with the earliest work on the Gatehouse perhaps distinguishable from the rest; part of the work on the south-west Tower approaches a more ashlar quality. Circuit walls with the remains of two towers and the main Gatehouse survive. Walling survives to the height of 5-6m, with the polygonal south-west Tower the most impressive, with the effect enhanced by the very fine and large copper beech tree that grows within it.

Fragmentary survival of interior features including two garderobes in the South-west Tower.

Included and highly graded for its exceptional historic interest as the remains of a major Welsh castle and as the oldest and historically most important secular building in Abergavenny. Scheduled Ancient Monument MM056(MON)