Tower to the south west of, and attached to, The Hanbury Arms 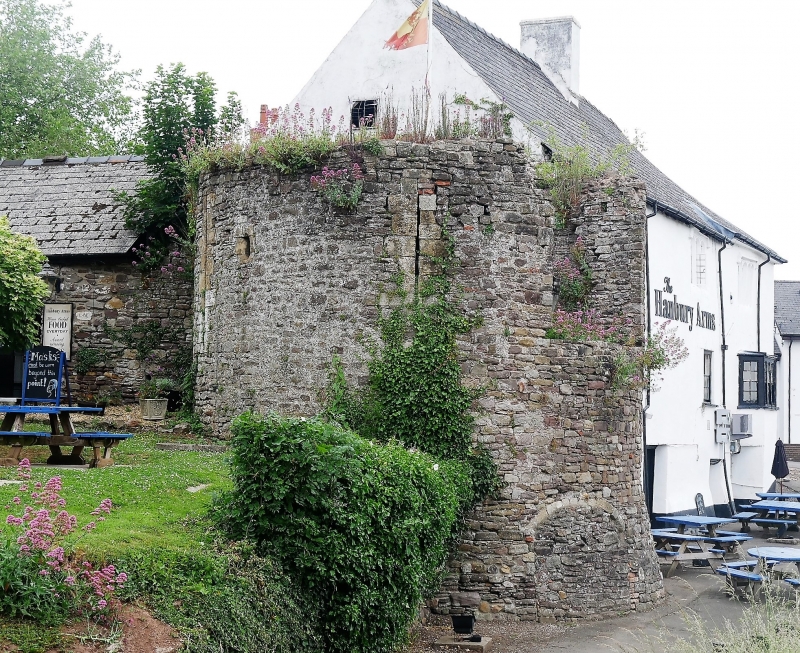 Entry Name: Tower to the south west of, and attached to, The Hanbury Arms

Location: Attached to the south west corner of The Hanbury Arms.

The remains of a medieval tower, possibly built c1219, by the historic quay of Caerleon, and near to the site of the old bridge. It could well be a chain tower for controlling access to the upper river, but, if so, there is no longer any relic or record of its necessary twin on the left bank. It might also be the one surviving tower of the outer bailey of Caerleon Castle. The tower was considered to be Roman in 1758 and, at that time, was depicted with a pronounced lean, but this is no longer in evidence. It was in use as a lock-up at this time while The Hanbury Arms housed the Magistrate's Court.

Circular tower of roughly squared sandstone rubble with a battered base. Three arrow slits are framed in neater squared limestone blocks. There is also a larger rectangular opening, now headless, of unknown purpose, but this does face the river. The tower is about 4.5m in height. The tower is truncated, though probably not by much, and roofless. It adjoins the south west corner of The Hanbury Arms (qv) and is attached to it.

This shows the remains of the basement vault and some brick repairs. It is otherwise featureless.

Included as a medieval tower having important historic associations with Caerleon Quay, and group value with The Hanbury Arms and Caerleon Bridge.