Church of The Holy Trinity, including attached hall 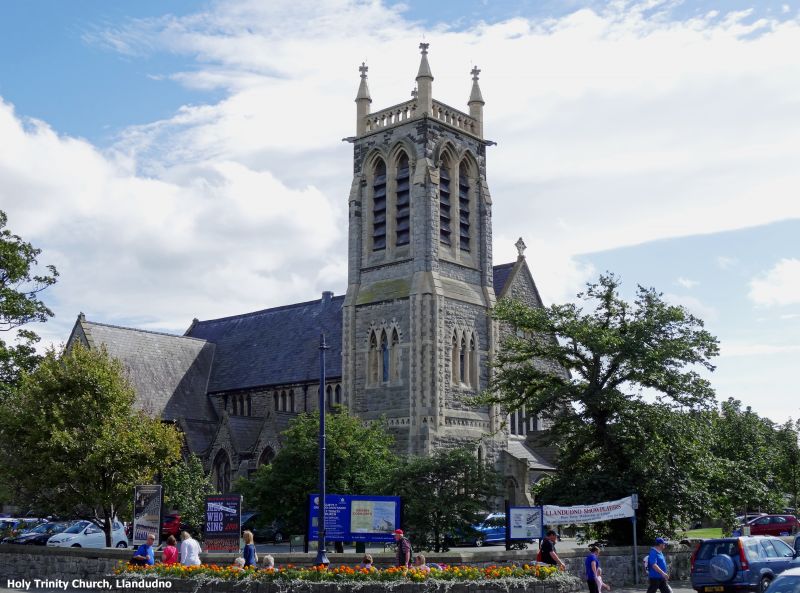 Entry Name: Church of The Holy Trinity, including attached hall

Location: In large churchyard on SW side of Mostyn Street

Cornerstone laid 5 July 1865; designed by George Felton, architect to Mostyn Estate, and built in order to accommodate the large numbers of visitors to the new mid C19 resort of Llandudno for which the Church of St George, built in 1840, was proving too small. Land was given by the Mostyn family, and from 1859 funds were raised by private and public subscription. By 1872, £10,000 had been spent; consecration 29 July 1874. Tower erected 1892. The Memorial Chapel dates from 1924. In 1931-32, the chancel was extended.

Gothic style; walls faced externally with stone; slate roofs. Aligned SE-NW, with chancel at SE end. Nave, north-west tower, side aisles with roofs running in a series of gables at right angles to the nave, transepts, south-east memorial chapel, attached to apsidal chancel. Clerestorey windows of three trefoil headed lights in arcading; each bay of side aisles with a gable and a window of two lancet lights with a quatrefoil over them. North-west nave window of four lights; North-west doorway; porch with lean-to roof with centre gabled window and flanking doors against north-west nave wall. North-east three-storey tower with tall paired lancet belfry openings and pierced arcaded parapet with octagonal pinnacles. Transepts each with a tall window of three trefoil headed lights. Chancel with apsidal end with five paired lancet lights. Vestries and hall to south-west of Church linked to the church by a corridor wing with paired lancet headed lights each side of doorway with gable. Hall wing at right angles has triple lancet window in gable facing NW, gabled porch facing SW, and 2-light window under small gable.