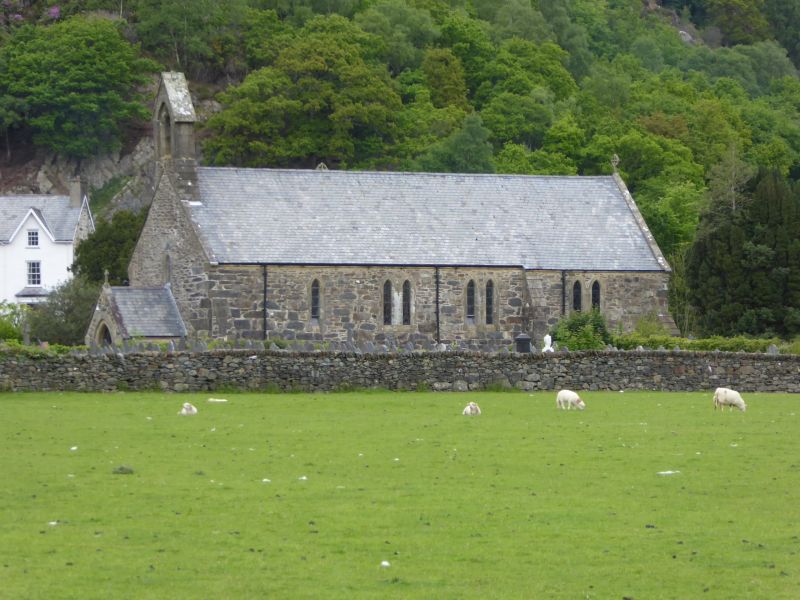 Location: Located in the village centre at the end of the lane and set within its own walled churchyard.

Site of a presumed Celtic Clas and traditionally regarded as one of the oldest religious foundations in Wales. Mentioned by Giraldus Cambrensis in c1216, the priory became an Augustinian house soon afterwards and is referred to as such by the mid C13. Some damage was done through burning during the Edwardian wars, though the church itself was probably unaffected; rebuilding, probably of the conventual buildings, was undertaken following an appeal in 1286 by Bishop Anian (the first) of Bangor. The buildings were again ruined by fire c1432; by the Dissolution it belonged to the (newly-founded) Benedictine abbey of Bisham in Berkshire. The church was extensively and indifferently restored c1830 during which period the S nave wall was entirely rebuilt and the N chapel demolished; its arcade arches were blocked up and new nave windows were inserted in the apexes. The fine medieval glass and carved woodwork (both noted by Pennant) were sold to defray the cost of the 'renovations'. In 1880 a second restoration was carried out which saw the provision of new windows, together with a reversal of the arcade reduction and the erection of a new N chapel. The chancel and sanctuary were re-fitted in 1921 by the Rev. Parry and included the insertion of a new Rood screen and panelling; a final restoration programme was carried out in 1929 at a cost of £1000. The surviving medieval fabric of the church is largely of c1220-30, though this incorporates some earlier, probably C12 masonry at the NW corner.

Former priory, now parish church. Of random rubble construction with mostly C19 sandstone dressings, on a tall plinth, battered slightly on the chancel side and especially noticeable on the S side. Renewed slate roof with stone-coped gable parapets, moulded kneelers and gable cross to the E. The W front has a single-storey gabled porch with surmounting cross and a pointed-arched entrance with returned label and foliated label-stops; C19 diagonally-boarded doors with decorative ironwork. The L porch return has a plain 2-light window. To the L of the porch is an early masonry projection, probably Romanesque work, and forming an irregular buttress. Projecting northwards from this is a masonry continuation with part of a chamfered medieval entrance jamb, adapted as a buttress in the C19. Above the porch in the W gable is a simple chamfered, pointed-arched window (C19) with the blocked arch of its Romanesque predecessor visible above. Large late C19 W bellcote, coped and gabled, and with battered sides; pointed-arched bell opening with cusped and chamfered inner arch. The S side has a simple buttress to the L with a plain pointed-arched lancet to its R. Beyond this are 2 pairs of lancets and a 2-tier buttress, with a further lancet pair to the R; terminating buttress at E end.

The N side has a 2-light, square-headed window towards the W end, within a former opening; to the L a 3-light C19 lancet. Gabled N chapel to centre, forming a T-plan with the nave and chancel. This has angle buttresses and a large plate tracery window with 3 cusped lancets and 2 spandrel occuli, all within a pointed outer arch of sandstone; moulded label with naturalistic foliage stops. Below this is a stringcourse, moulded and stopped as before and raised up to the centre, beneath the window. A further paired lancet is on the chapel's W return. The N chancel has similar lancets, partly obscured by a single-storey lean-to vestry (late C19), extruded in the angle between the chancel and the chapel. This has a modern fixed boarded door to the L (upper section glazed) and a 2-light arched window to the R; further door to R with diagonal boarding; plain central chimney. The E wall of the vestry is partly medieval and has a section of C13 gritstone window jamb surviving to the L. Further angle buttressing to the E end, C13 but with C19 capping. Fine early English triple lancet group of unusual height; of gritstone with chamfered reveals and inner arches, the latter showing evidence of former ferrumenta.

Large nave with stone-flagged floor and simple late C19 pitch-pine pews on wooden plinths. Five-bay roof with queen post trusses, with pointed arches to the centre formed by curved bracing; plain tie-beams braced onto double-curved stone wall corbels, save the fifth and seventh from W on the N side, which sit above the higher pointed arches of the N chapel. Straight cusped windbraces to central pairs of purlins. Octagonal pitch-pine pulpit on an Early English style cluster column base; blind tracery panels in 2 tiers. At the W end is a curious small font bowl of cut and polished slatestone, possibly medieval. This is (later) inscribed with runic/bardic characters with the date 1882 and has a columnar limestone base with square slatestone plinth, further inscribed with the Nennius alphabet. The 2 easternmost bays of the N side of the nave form a fine early C13 2-bay arcade, dividing the nave from the N chapel. The central pier and engaged flanking piers have clustered shafts with standard Early English capitals and bases; heavily-moulded pointed arches with continuous moulded label on the nave face. Each arch has a 6-bay Perpendicular-style part open screen (early C20), with plain panelled dado and open upper section; cusped and foliated tracery heads. The central sections of the western-most screen form opening doors. The beam has vinescroll carving with cusped brattishing above.

The N chapel has a 2-bay roof as before and a stone-flagged floor, now with raised timber platform over; pitch-pine benching as in the nave. Simple late C19 altar table in Early English style, with 3-bay front, foliated columns and shouldered arches. Large chamfered, double-arched chancel arch with fine early C20 oak rood screen in C14 Decorated style. Of 6 bays, with complex open tracery arches above blind tracery dado, the former with cusped and depressed ogee arches. The central 2 bays have dado doors with applied C19 carvings depicting the Evangelist symbols; octagonal dividing shaft with blind tracery, shaft-ring and naturalistic foliage capital. Two carved and partly-gilded angel figures flank the central doors, supported on foliated corbels. Lierne-vaulted canopy with complex Rood Beam; this has 2 tiers of vinescroll and cusped and foliated brattishing. Surmounting the Rood Screen is a large Rood Group with carved and gilded figures above a tripartite canopy niche; this has a central Seated Christ, with attendant angel figures and crocketted finials.

The chancel is stepped up and has a polychromed, tiled pavement of conjoined octagons to the centre; two-and-a-half bay roof, as before. C13 N door arch (now leading to the vestry), with deep chamfered reveals and evidence of original limewashed plaster. Stepped-up sanctuary with polychromed pavement. Oak dado panelling to this and E end of chancel, continued around onto E wall under the triple lancet window. Flanking the window are carved 4-bay sections, with fine carving similar to that of the Rood Screen; that to the L is dated 1918 and that to the R, 1908. Both have crocketted finials and carved surmounting figures of the Blessed Virgin Mary (L) and St. David (R), contained within ogee tracery niches. Contemporary altar table and flanking architectural candelabra. These have triangular profiles and wide crenellated drip trays. At the base of each is an inscription with name and date (to the L: 'John Parry, Nov.16th 1911'; to the R, 'Morris Vivian Parry, Aug.Ist 1908.').

Stained and Painted Glass: plain quarry leads to nave and N chapel, with the exception of a figurative panel to the central nave S wall window; this dated 1938, commemorating Maj. E C Thomas. In the chancel, the E window group has C13 style figurative glass with scenes from the Passion contained within elongated roundels set in a grisaille background; for James Wyatt of Bryn Gwynant, d.1882. The S window has good coloured grisaille glass with scenes of Christ as Good Shepherd and Light of the World.

Monuments: in the chancel there are simple white and black marble funerary tablets to members of the Pritchard, Kay and Morris families, mostly mid C19. In the nave, on the S wall, is a good carved relief panel in oak to Evan Lloyd Esq. of Hafod Lwyfog, d.1678, with arms of Owain Gwynedd; in a contemporary oak frame.