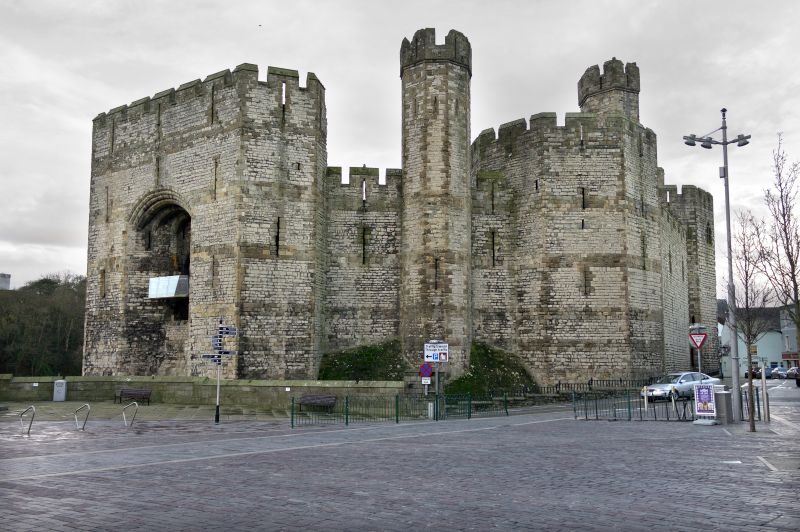 Location: At the S end of the town and on the N bank of the Afon Seiont.

Begun in 1283 and still incomplete when building work ceased c1330. Built for Edward I of England, it combined the roles of fortification, palace and administrative centre. A motte and bailey castle had been built here in the late C11 by Earl Hugh of Chester, although it became a residence of Welsh princes, including Llewelyn ap Gruffudd, after the Welsh regained control of Gwynedd by 1115. The English conquest of N Wales followed quickly after the death of Llewelyn ap Gruffudd in 1282 and Caernarfon was built to consolidate the English gains. Edward I employed James of St George as his architect, who had previously been employed by Philip of Savoy and had designed for him the fortress-palace of St Georges d'Esperanche. James also directed the building other castles for Edward I, including Harlech, Conwy and Beaumaris, using English craftsmen and labourers. The design of Caernarfon Castle echoed the walls of Emperor Constantine's Roman city of Constantinople, which also has polygonal towers and banded stonework, and was thus intended by Edward to be an expression of imperial power. Edward I and Queen Eleanor visited Caernarfon in 1284 and it was said that their son, Edward, the first English prince of Wales, was born at the castle in 1284.

Construction of the castle was integrated with the construction of town walls protecting the newly established borough, the town being situated on the N side of the castle. By 1292 the southern external façade of the castle was probably complete, while on the N side the castle was protected by a ditch and the walled town. The castle was damaged during an uprising in 1294 led by Madog ap Llewelyn, but Edward I swiftly regained control of Caernarfon and the castle, where restoration work began in 1295. The uprising had demonstrated the need to complete the castle's defences on the town side, which were largely built in the period 1295-1301. Work subsequently continued at a slower pace in the period 1304-30 and included the completion of the towers, including the Eagle Tower which was completed 1316-17 and in 1316 the timber-framed 'Hall of Llewelyn', the Welsh prince's residence at Conwy, was dismantled and shipped to Caernarfon. The upper portion of the King's Gate was constructed in 1321 and included a statue of Edward of Caernarfon, who had been crowned Edward II in 1307.

The castle was garrisoned for nearly 2 centuries but was increasingly neglected as hostilities softened from the C16 onwards. The castle was garrisoned for Charles I during the Civil War but was surrendered to the Parliamentarians in 1646. In the C18 the castle became one of the most celebrated of ruins in Wales, which began its present phase as tourist attraction and ancient monument. Restoration was undertaken in the final quarter of the C19 under the direction of Sir Llewelyn Turner, Deputy Constable. In 1908 ownership passed from the Crown to the Office of Works and restoration work continued. This included the reinstatement of floors in most of the towers and reinstatement of the embattled wall walks by 1911. The castle was the venue for the investiture of both C20 Princes of Wales, in 1911 and 1969.

Constructed of coursed limestone with darker stone banding to the S and E external façades between the Eagle Tower and NE Tower. The plan is polygonal, resembling a figure of 8, and constructed around an upper and a lower ward in the form of curtain walls and mainly 3-stage polygonal towers with basements (in contrast to the round towers of the town walls). The structure is in 2 main phases. The earlier is the S side, from and including the Eagle Tower to the NE Tower, was constructed mainly in the period 1283-1292, while the N side facing the walled town was built after the uprising of 1294. The curtain walls are embattled with loops to the merlons and a wall walk. Openings are characterised by the frequent use of shouldered lintels, giving rise to the alternative term 'Caernarfon lintel', and 2-centred arches. The towers have reinstated floors of c1911 on original corbels. The outer walls have arrow loops. Windows are mainly narrow single-light, but some of the mullioned windows incorporate transoms.

The principal entrance is the 3-storey King's Gate on the N side. It is reached across the ditch by a modern segmental-arched stone bridge with stone steps to the outer side, replacing the medieval drawbridge. The King's Gate has polygonal towers with 2-light windows to the outer facets in the middle stage and 2-light windows in the upper stage. The entrance is recessed behind a segmental moulded arch. It has a 2-centred arch beneath string courses and 2-light transomed window. Above the main arch is a statue of Edward II in a canopied niche with flanking attached pinnacles.

To the R is the outer wall of the kitchens and then the Well Tower, of 3 stages with basement. The Well Tower has a higher polygonal turret reinstated in the late C19 and full-height square projection on the W side housing the well shaft. The tower has 2-light windows in the middle and upper stages.

The Eagle Tower at the W end is the largest of the towers, having been designed to accommodate the king's lieutenant. It has 3 stages with basement and 3 higher polygonal turrets. The battlements are enriched by carved heads and eagles, although much weathered. On the N side are 2-light windows and an attached stub wall with drawbridge slot. This is the planned water gate through which water-borne supplies were intended to be conveyed to the basement of the Well Tower at high tide, but it was not completed. It has polygonal responds to the gate, a portcullis slot and 2 superimposed windows between the basement and ground-floor levels. On the N side is a flight of stone steps to an arched doorway at basement level. This postern was the main entrance for those approaching by sea. On the S side the curtain wall is built on exposed bedrock and the Queen's Tower, Chamberlain Tower and the Black Tower each have a single higher polygonal turret. The outer faces have only narrow loops. On the W side of the Chamberlain Tower are stone steps to a doorway under a shouldered lintel that led into the great hall. On the E side of the Black Tower is the shorter polygonal Cistern Tower, with the unfinished Queen's Gate at the SE end. Between the Chamberlain Tower and Black Tower the curtain wall is stepped in, from which point there is a substantial raked stone plinth continuing around to the NE Tower. The Queen's Gate has double polygonal towers linked by a straight wall above the gateway, while the openings are all narrow loops. The gateway is raised above a high basement storey (and would have been reached by the building of a massive stone ramp) and is recessed beneath a segmental arch with murder holes. The Watch Tower to the N is narrower and higher than the remaining towers, beyond which is the 2-stage NE Tower, which has a 2-light window. Returning along the N side, which was built after 1295, the curtain wall and the 4-stage Granary Tower incorporate 2-light windows.

The King's Gate has murder holes to the vault and porters' rooms to the L and R, leading to the interior. Internally the castle is planned around an upper ward on the E side and a lower ward on the W side. Through the entrance passage is a 2-storey projection on the R (now housing a shop), the S side of which retains 2 portcullis slots and a vault springer, indicating that a second entrance was built here, although it no longer survives above the foundations. Above the main gate is a former chapel, which retains its original piscina. The upper storey hall has window seats. On the W side of the King's Gate are the foundations of the kitchens in the lower ward, in which are 2 round foundations for copper cauldrons and springer of a former vault. The Well Tower does not have reinstated floors, but in each storey a fireplace and garderobe are retained and in the second stage is a small kitchen above the well chamber. The fireplaces all differ in detail: in the basement is a segmental arch, the lower storey a tripartite lintel, the second stage a projecting lintel on corbels with raked hood, and chamfered lintel to the upper stage. The tower has a full-height newel stair. The basement is reached by external stone steps. Between the Well Tower and Eagle Tower is a restored fireplace with a raked hood in a chamber whose outline walls are visible.

The Eagle Tower has stone steps to the basement to the L of the main doorway, both lower stage and basement having pointed doorways. The upper stages have 2-light windows similar to the outer faces. The thick walls incorporate mural passages and stairs. In the lower stage is a large fireplace with raked hood and a small octagonal chamber that probably served as a chapel. The great chamber in the second stage also has an octagonal chapel, which retains a stoup or piscina. Between the Eagle Tower and the NE Tower the curtain wall and towers have mural passages in addition to the wall walk and generally have stone steps in either straight flights to the wall walks or newel stairs, and most chambers in the towers have associated garderobes. The Queen's Tower, known as the 'Banner Tower' in the C14, and the Chamberlain Tower have chambers in each storey with small square subsidiary chambers that probably served as chapels, and 2-light windows. The Queen's Tower has 3 octagonal chimney shafts behind the parapet. In the Chamberlain Tower the lower storey retains a fireplace with shouldered lintel. Both towers are occupied by the museum of the Royal Welch Fusiliers. Between Queen's Tower and Chamberlain Tower are the foundations of the great hall, while the 2 superimposed mural passages in the curtain wall have 2-light windows that formerly opened into the hall.

The Black Tower is smaller than the other towers and has only single chambers in each stage, with cambered fireplace in the upper chamber, and 2-light windows. The Cistern Tower has a vaulted hexagonal chamber beneath an open stone-lined rainwater tank visible on the wall walk. In the unfinished Queen's Gate the position of porters' rooms is discernible in the flanking towers of which the S has a lintelled fireplace while both have garderobes. Portcullis slots and murder holes are in the passage. The upper storey over the passage was to have been a hall but was not completed. The Watch Tower is entered by a doorway at the wall walk level only.

The NE Tower is simpler with single chambers in each stage, as is the Granary Tower, which incorporates a well shaft and has a fireplace with raked hood in the upper stage. Between the NE Tower and the King's Gate the curtain wall has corbels representing former buildings built against the curtain, and its mullioned windows incorporate window seats.

Listed grade I as one of the finest medieval castles in Wales, and unique in its royal associations.
Scheduled Ancient Monument CN 079.
World Heritage Site.