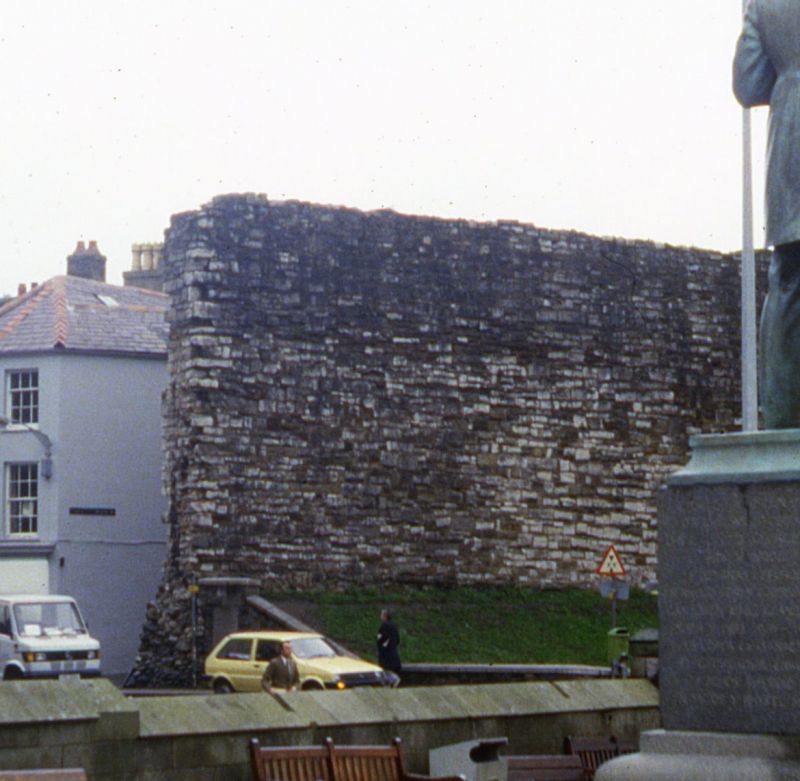 Location: Enclosing the old town on the N side of Caernarfon Castle.

The borough of Caernarfon was established by Edward I of England under the Statute of Wales in 1284. It was the centre of government for N Wales and was protected by the erection of the Town Wall, with Caernarfon Castle at its S end. The construction of the Town Wall had begun in 1283 in conjunction with the building of Caernarfon Castle, probably under the direction of James of St George who was architect of the castle. Masonry work on the first phase of the Town Wall was completed by 1285, re-using some stone from Segontium Roman fort. The Town Wall was badly damaged in the native uprising of 1294 and were restored and improved in 1295 at a cost of £1195. The wall walk and towers were further repaired in 1309-12. Of other entrances, only a single postern gate has survived intact, the Greengate to the SE. Former posterns on the W side are infilled and can be seen in the W wall of the church of St Mary and gable end of the police station. Another postern, the Water Gate at the end of Castle Ditch, has been altered. Further openings facing Bank Quay, from Church Street, Market Street and Northgate Street, are later insertions. The bell tower at the NW corner was converted for ecclesiastical use as accommodation for the chaplain of the church of St Mary, built 1307-16. The Bath Tower facing the Promenade was converted in 1823 when the Earl of Uxbridge created public baths on the site of the present 11-17 Church Street, part of a scheme to attract visitors to the town, when the upper stage of the Bath Tower became a reading room. The main E and W entrances survive substantially intact (are listed as separate items).

High coursed rubble-stone wall in several straight sections forming an irregular plan and a circuit approximately 730m long, with 2 gate houses (listed as separate items) and eight 2-stage round towers contrasting with the polygonal towers of the castle. The quality of masonry in the wall is variable, accounted for by various repairs and restorations. The towers have mainly open gorges and were originally crossed by timber bridges, one of which has been repaired on the NE side. The upper stages of the towers have arrow loops, while the embattled parapet, where it survives, has similar loops to the merlons. The walls have regular brattice slots. At the SE end the wall has been demolished across Castle Ditch and begins on its N side, where on the inner side facing Hole-in-the-Wall Street stone steps to the wall walk survive at high level, and where there is a postern gate, known as the Greengate, under a 2-centred arch with portcullis slot. The adjacent tower has a shouldered lintel to a fireplace in the upper stage. The wall, with 2 towers and the East Gate to High Street, continues on a high bank, around to the N side facing Bank Quay. The NE tower survives to the full height of its battlements and has stone steps on the inner side. A skewed archway has been inserted leading to Northgate Street. Further W, an inserted segmental arch spans a double-carriageway entrance to Market Street, while the tower on its W side also retains stone steps. A lower segmental arch leads to Church Street immediately to the E of the church.

On the NW side the church of St Mary is integral with the Town Wall and its NW, or Bell Tower, houses the vestry, while its upper storey served as a priest's dwelling. Facing N it has a 2-light Tudor window under a hoodmould, with sunk spandrels, while the W face has a plainer 2-light window in the upper stage. On the parapet is a gabled bellcote. A blocked former postern gate is on the return facing the promenade, incorporated into the church. The next tower facing the promenade is the Bath Tower, which has early C19 detail in connection with the baths established in 1823. It has its doorway in the S side facing the Promenade, which has a pointed arch with studded boarded door and Y-tracery overlight. In the N and S faces the upper stage has restored 3-light mullioned and transomed windows incorporating iron-frame casements, and restored embattled parapet. A 2-storey projection with parapet is built behind. At the W end of the High Street is the former gatehouse known as Porth-yr-Aur, beyond which there is a single tower behind the former jail. The tower is enclosed at the rear by a late C19 wall with segmental arch flanked by small-pane windows under lintels. Further S is a segmental arch across Castle Ditch, on the S side of which the reveal and part of the keyed arch of an earlier gateway is visible, while the wall abutting the castle is an addition of 1326.

Listed grade I, the medieval Town Wall has survived to almost the complete extent of the original circuit, defining the medieval town, and with Caernarfon Castle is of national significance in the survival of a medieval garrison town.
Scheduled Ancient Monument CN 034.
World Heritage Site.