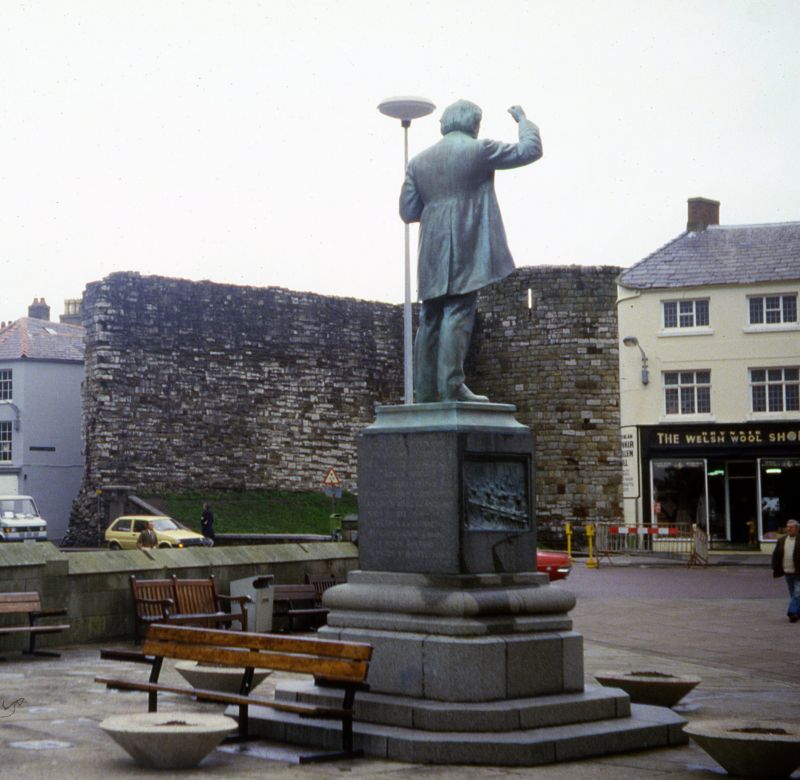 Location: On the terrace on the W side of Castle Square, opposite the castle.

David Lloyd George (1863-1945) was a world statesman and one of the most important British politicians of the C20. Born in Manchester, he was raised at Llanystumdwy, Caernarfonshire. He entered Parliament as Liberal MP for Caernarfon Boroughs in 1890 and continued to represent the constituency until 1945. Initially a spokesman for non-conformist and Welsh causes, he was subsequently appointed to a succession of ministerial posts, including President of the Board of Trade in 1905, and from 1908-15 Chancellor of the Exchequer. In the latter post he introduced national health insurance and old age pensions, the foundation of the Welfare State. He was Prime Minister 1916-22 and was a leading figure in the Versailles peace negotiations following World War I, and in the partition of Ireland. Lloyd George was elevated to the peerage in 1945 shortly before his death.

The statue was erected in 1921 when Lloyd George was Prime Minister. It is by W. Goscombe John, and cast by A.B. Burton of Thames Ditton. The base is by J. Fletcher Ltd of Caernarfon.

A full-length bronze statue on a square freestone granite base and stepped plinth. The base has inscriptions to the front and rear in English and Welsh. High relief bronze panels to the sides portray respectively the village school at Llanystumdwy and the Paris Peace Conference of 1919.

Listed for its social historical interest as commemorating one of the most important Welsh politicians of the C20, and as an important memorial statue by a prominent Welsh sculptor. It also makes an important contribution to the historic character of Castle Square and the setting of Caernarfon Castle.