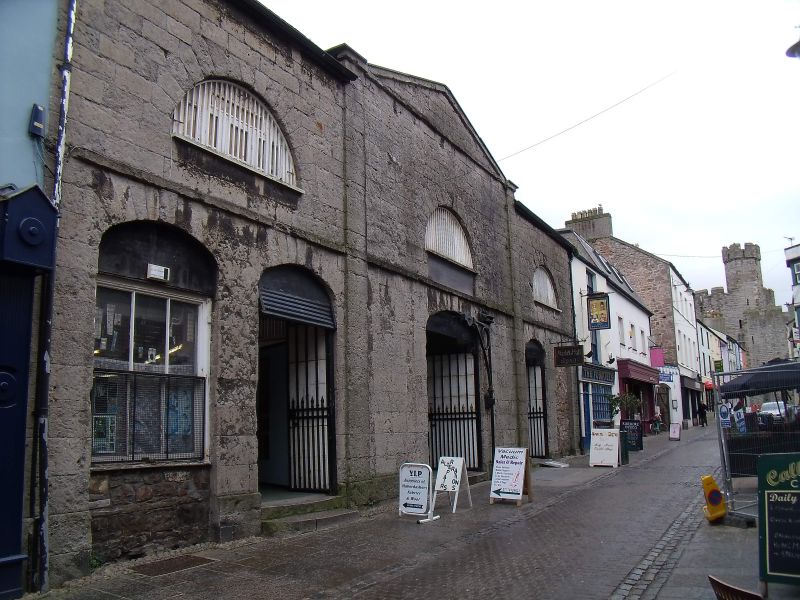 Built in 1832 by John Lloyd (details on tablet), architect of Caernarfon, as a corn market, and on the site of an earlier house known as Plas Mawr. A basement, entered from Palace Street, was used as a bonded warehouse for spirits. It was built on land owned by the Assheton-Smith family and remained the property of the Vaynol Estate until 1957.

A 2-storey market hall in a simple classical style, of coursed dressed stone and hipped slate roof with raised lantern to the central portion and other added roof lights. The Palace Street front is 3 wide bays, with pedimented central bay framed by plain pilasters. The central bay has a doorway with elliptical arch defined by prominent voussoirs. It has a boarded tympanum and double cast iron gates with dog bars and spear finials. Attached on the R side of the door is a cast iron crane above a basement trap door. The L-hand bay has 2 arched doorways with voussoirs, of which the outer has an inserted 6-pane sash window, while the inner has double iron gates. The R-hand bay is similar, with iron gates to the inner arch and a blocked outer arch. A thin projecting band is between storeys. In the upper storey are lunettes, part boarded and with replaced glazing. Below the sill of the central lunette is a slate tablet recording the opening of the building.

The Hole-in-the-Wall Street elevation is similar but slightly narrower, the outer bays having only a single arched doorway, both with iron gates, while the central bay has an infilled doorway. The upper-storey lunettes are barred.

The interior and roof represents a later C19 remodelling. Stairs on the SW and NE sides have plain balusters. The upper storey gallery is supported on cast iron posts, while superimposed cast iron posts support the trusses. The gallery front has plain balusters and hand rail. The central portion has a 4-bay roof of shallow pitch, incorporating king-post trusses with raking struts and brackets.

Listed as well-preserved C19 market hall and for its contribution to the historic integrity of the walled town.