A Grade I Listed Building in Bangor, Gwynedd 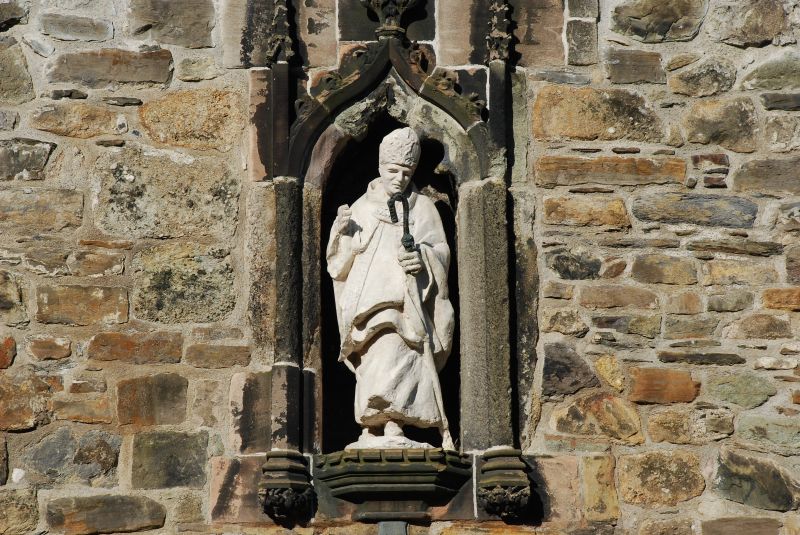 Location: In a sloping oval churchyard below the street.

This is the oldest cathedral foundation in Britain; founded c525 on the site of a Celtic clas and dedicated to St Deiniol c546. The present structure can be dated back to early C12 when the church had an eastern apse and probably aisles nave. Early in C13 it was given an EE type square ended chancel; Bishop Anian (1267-1305) started the rebuilding of the crossing, central tower and Lady Chapel - the tower was burn down in 1309. Following various rebuildings including work by Bishop Dean and Dean Kyffin in C14 and C15, major reconstruction was carried out by Bishop Skevington (1509-34) who built the existing nave and western bell tower. The Chapter House and Vestry to NE were raised before 1721 with the addition of a Library; this was then remodelled after 1778 by a "Mr Wyatt" with the creation of a Registry. In 1824 a full restoration was begun by John Hall of Bangor along with a somewhat conflicting reordering of the interior by John Foster, a leading Liverpool architect. In 1857 the choir was re-roofed by Henry Kennedy. Gilbert Scott restored the Cathedral from 1868 to 1880 especially the eastern half, including rebuilding of the crossing. The contractors were Beauland of Bradford and later Thompson of Peterborough. The foundations were found to be insufficient to support the tall central tower that Scott designed, nor were there the funds to built it; finally in 1966/7 A D R Caroe created the existing structure.

Rubble masonry with some dressed stone; mainly lead roofs and crenellated parapets to nave and tower. Diagonal buttresses to bell tower and stepped buttresses to nave with niches to N side; Scott's gabled buttresses with detached shafts to chancel.

The nave has a 6-bay, 2-order arcade carried on octagonal piers and square bases; linked hoodmoulds. Above this the stone walls are rendered. Oak roof with bosses, crenellated tie beams and stone corbels. Modern inner porches to N and S; slightly off centre 3-order tower arch with steps leading up to a further modern inner porch. Square pulpit with chamfered corners and panelled reliefs; C15 octagonal font on modern platform and with modern canopy. Heavily moulded crossing arches with half-round responds to W; choir screen of 1908 by Oldrid Scott and rood of 1950 by Alban Caroe. The chancel has encaustic tile floor and canopied choir stalls; 5-bay timber lierne roof by Scott. Low blocked doorway to N beside a Netherlandish C17 wood carved statue in blocked window opening; reredos of 1881 by Oldrid Scott. 3-bay hammerbeam roofs to Transepts; S transept serves as the Lady Chapel and has painting (1934) by Brian Thomas set into the former arched opening to the medieval Lady Chapel; a tomb recess in the S wall traditionally contains the body of Owain Gwynedd but it is later than that and seems to relate to the resiting of the body. Two broken medieval stone crucifixes, one to the tomb recess and one to the reredos. Collection of medieval stone carved pieces gathered at the NW end including the well detailed C14 monument to Eva. The Mostyn Christ hangs at the W end of the N arcade, a Bound Rood said to be dated 1518 and possibly from Rhuddlan Priory. Many C19 wall monuments. Three windows have glass by David Evans of Shrewsbury originally made in 1838 for the E window; moved in 1873. S Transept window made in 1885 by Mayer of Munich and present E window by Clayton and Bell (1873).