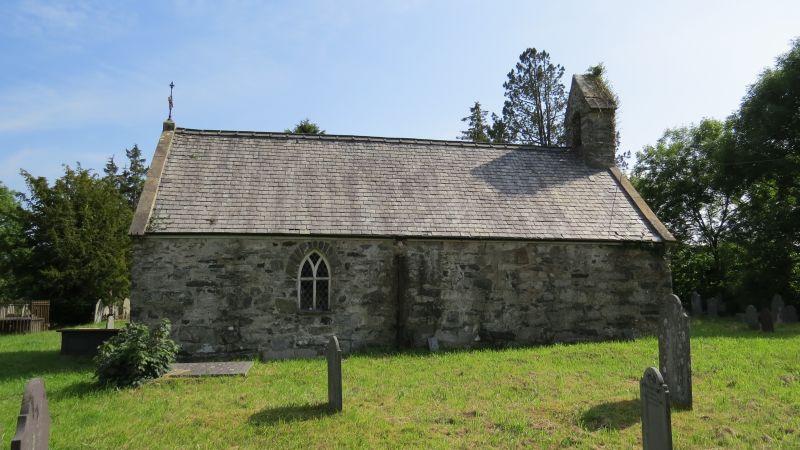 Location: The parish church lies on a small by-passed section of the main road at the junction with the Cwm Pennant road. It stands within an irregularly shaped graveyard and is approached through a lych gate.

The church originated as a chapelry of St Beuno, Penmorfa, and was built in the C15, from which period the roof survives. It has been considerably altered at later dates. Now combined as the parish of Dolbenmaen with Penmorfa.

A small single cell building constructed with uncoursed local rubble stone with long stone quoins, all partially rendered, with a C19 slate roof between raised gable parapets. The S door is near the W end, a pointed arch containing a C19 boarded door with ornamental ironwork. Pointed headed windows both sides, that at the centre of the S side having diamond leaded glazing set in timber transomed 'Y'-tracery, with another further E, and a similar window opposite on the N side. The E window is round headed. The W wall has been rebuilt, and has a square headed high set W window, and corbelled gabled bellcote surmounted by a small stone cross. A slate sundial of the early C19 is set on the S side.

Wall plastered throughout. Roof of 5 bays, defined by C15 arch-braced collar beam trusses with cusped king posts and soffits of the principal rafters, which rise directly from the walls. Windbraces to 2 tiers of purlins. Boarded soffit to the E bay over the chancel at arch-brace level forming a shallow barrel vault. Tiled floor, the chancel raised by a single step. Timber altar rail on iron scrolled stanchions. Reredos behind the altar, formed from the frontal of the former W gallery. Three corbels at the W end are probably the remains of beams supporting the W gallery, lit by the high W window.

Included at II* largely for the survival of medieval fabric including the fine roof structure which appears unaltered.