A Grade I Listed Building in Llanelltyd, Gwynedd 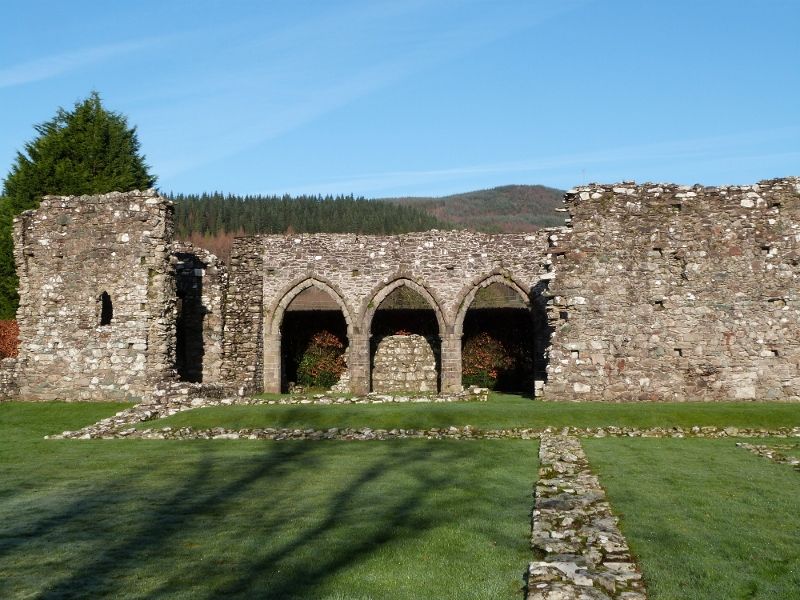 Location: Situated in the lap of the vale near the Afon Mawddach and on the opposite bank of the river to Llanelltyd village; accessed via a lane leading NE off the main road.

Cistercian abbey dedicated to the Virgin Mary; founded in 1198 by Hywel, Lord of Merioneth and great-grandson of Owain Gwynedd; originally settled by a party of monks from the community at Cwmhir. Llywelyn the Great granted the charter in 1209 to the first abbot, Esau, and by this time the choir of the church, at least is likely to have been completed. Both Edward I and Edward II confirmed the charter, and in 1291 the abbey's income is noted as ú20. The claustral buildings do not seem to have been completed and the church itself was provided with a W tower in the mid C14, when the projected central tower was abandoned. At its Dissolution in 1536 the abbey's income was recorded as ú58 13s 4d, (ú58.67p), a comparatively small figure. The last abbot, Lewis Thomas, was appointed suffragan Bishop of Shrewsbury in 1537. The abbey was subsequently leased to one John Powis, a court official, for twenty-one years.

Of the original complex only the ruins of the church survive, the conventual buildings being recognisable only through foundations. The remaining elements of this are of rubble with buff-coloured and red sandstone dressings and are transitional/ early English towards the E and Decorated Gothic at the W end. The church has a long continuous nave and chancel with a straight E end. Here, three tall lancets pierce the gable with wide inner splays. The taller central one has cable moulding and plain, engaged, cushion-type capitals; moulded lozenge decoration to that at R (corresponding L lost). Plain flanking lancets with similar capitals with moulded necking. Moulded, arched recess to the chancel S wall with, to the R a wide, segmental-arched tombrecess. W of this the sedilia, one arch (to L) of which remains; this is cable moulded and is supported on a compound pier with transitional capital and base. To the R a similar engaged capital and shaft. Beyond this to the W the cloister entrance; heavily-moulded jambs and round-arched head. The cloister-facingside has 2 arches, one inside the other; continuous cable moulding. There is no triforium, though the splayed bases of four clerestorey windows survive to the S wall. On the N side of the chancel, a pointed-arched, moulded and labelled tomb recess. The 3 western-most bays of the nave are arcaded to the N and lead to a ruined N aisle; octagonal piers on plain, chamfered bases with simple moulded capitals. Chamfered, pointed arches with similar inner arches; at the western-most springing a weathered head-corbel. Above the arcade is evidence for 2 further clerestorey windows. The rubble base of a chest tomb survives near the second arch. Lancet base to E end of N aisle and a similar opening to W; other, demolition-related openings and breaks. At the S side of the E wall is a small square aumbrey witha rebate for a door. The ground floor of the C14 W tower survives with 3 arched lights; wide internal splays with segmental heads. In the SW corner, the remains of a newel stair with evidence for a corner buttress here externally.