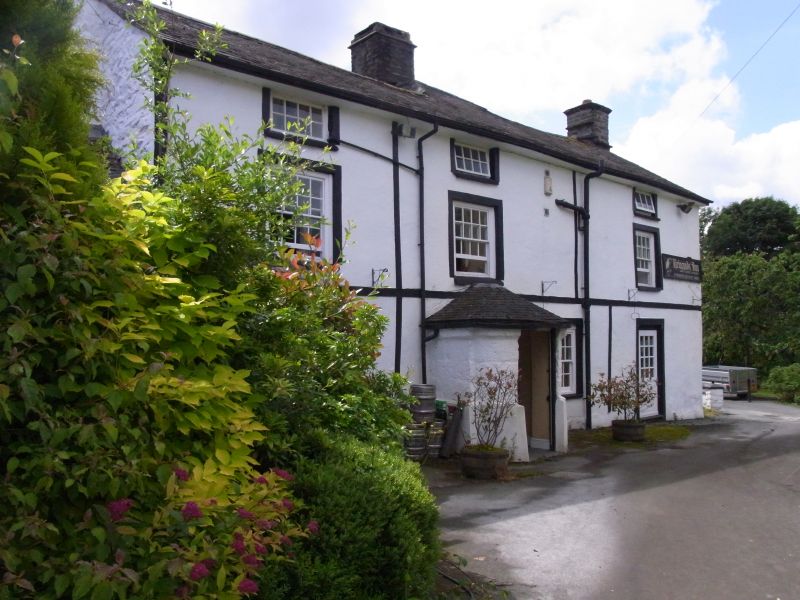 Location: The inn is located on the corner of the the A470 Dolgellau to Machynlleth trunk road and the A458 to Welshpool.

The building is a coaching hostelry, probably of the late C16 or C17, but by local tradition originating in the C15. It has been variously known as the Peniarth Arms (early C20), the Bury Hotel (1920's) and more recently the Brigands Inn in memory of the notorious Gwylliaid Cochion Mawddwy, who were eventually suppressed by Lewys ab Owain, Baron of the Exchequer, and Sir John Wynne of Peniarth in 1554/5 who executed some 80 of their number, although Lewys was eventually murdered by their survivors. The earlier section forms the N wing facing the Welshpool Road, to which the W wing was added in the C18. Further later additions and alterations.

The building is rendered and painted white, with slate roofs. The NNW elevation, which comprises the earlier range, was originally of 2 storeys and attics, heightened later to 3 storeys, and 4 bays, with the entrance in the 2nd bay through a slated porch with rounded front corners and conical roof, probably C17. 16-paned sash windows with black painted surrounds, and a platband between first and second floors. 16-pane sashes to the first floor, except in the 3rd bay, and pivoted 6-pane casements to the attic floor directly below the boxed eaves. Gable end stacks with stone drips. A door in the 4th bay on the right. The range has been extended to the E by a lower 1-bay service building with an outshut on the front, and extends to a square tower with a pyramidal slate roof, perhaps once a dovecote, at the E end. The elevation facing W is approximately symmetrical between forward projecting gabled wings, one of which is the gabled return of the earlier range. The main entrance to the hotel is through a central gabled porch. 16-paned sash windows each side on the lower two floors (one replaced on left, first floor) and 12-pane single sash windows to the top floor, two of which have been replaced. The right hand wing originally had a tripartite sash window to the ground floor, now a modern French window, and 12-pane sash above.

Much of the interior has been altered, but the central bay of the earlier wing has extended ogee chamfer stops to 3 cross beams to the centre bay, and an angle fireplace on the rear wall. In this room a fully framed partition to the W bay with sturdy timbers in a post and panel partition to the stair in the W bay, which climbs over the angled fireplace. Some C17 panelling on the stair. The unusually shaped porch, which is without dateable features, may also be C17, opens into the lower end of this central bay. On the first floor principal rafters of the earlier roof appear on the centre-west bay truss.

Included as an early hostelry on a major coaching route through central Wales, retaining some C17 structure and containing some good detail, with an added large and handsome C18 wing reflecting the increased use of rural roads of that time.