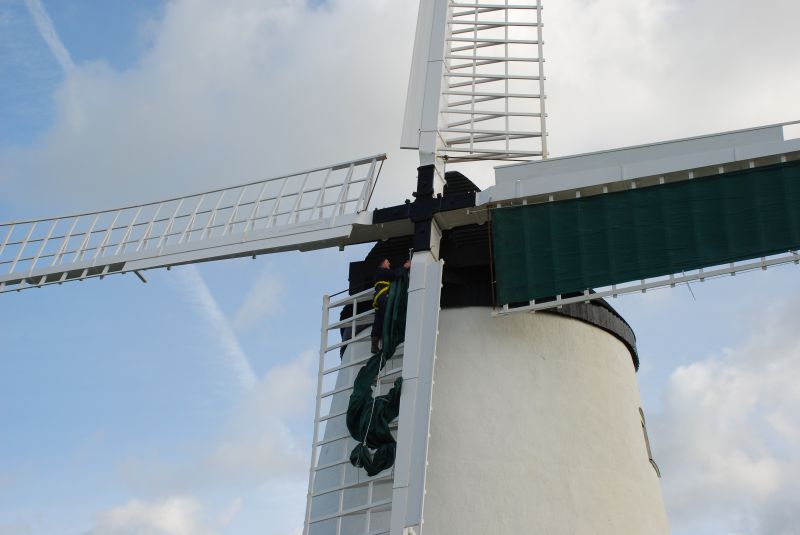 Location: Set back from the N side of a country road leading W from the village of Llanddeusant, the mill is located c500m W of the Church of St Marcellus and St Marcellinus.

Late C18 windmill, built between August 1775 to March 1776 at a cost of £529.11s (£529.55). The mill formed one of the outlying properties of the Llynon estate, built for Herbert Jones by Andrew Williams. It was operated by another Jones family, the first miller Thomas Jones followed by his son, another Thomas; his sons chose not to run the mill and the operator in 1881 is recorded as being their cousin William Pritchard. In 1892 the mill was taken over by Robert Rowlands, one of the renowned family of Anglesey millers, who continued running the mill throughout the First World War. In 1918 a severe storm struck the cap so badly that it became permantly locked in one position; little grinding was then carried out as the sails could only be operated when the wind came from the SW. Despite Rowlands offer to pay towards the cost of repairing the mill, the owner refused to sanction the work and the mill's useful life came to an end.
In 1978 the owner of the mill, Thomas Rowlands, retired from farming and decided to sell the mill. It was purchased by Anglesey Borough Council who restored the mill to full working order. The restoration was carried out over several years and was finally completed late in 1983, the sails raised in August of that year. The total cost of the restoration was £120,000 and on May 11th 1984 Melin Llynon was officially opened by the Mayor of Anglesey, Councillor T D Roberts.

The completely restored interior is in full working order and includes some pieces of the original machinery. There are 3 pairs of stones, 2 of which are dressed and used for grinding, the third is open and on display to the public.

Listed as a complete and well-preserved windmill tower, which, since restoration is the only working windmill on the island out of over 40 which were in operation in the mid C19.