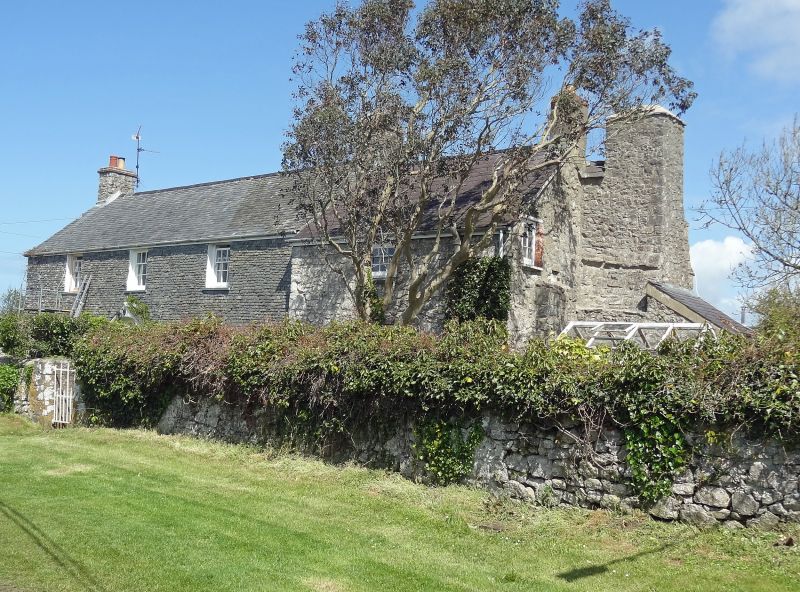 At N side of the road entering Bosherston village from the Pembroke direction, and immediately W of the churchyard.

Style was the farmhouse of a tenancy of about 89.1 hectares under the Earl of Cawdor. Tenanted by R Hitchings in 1782, J Benyon in 1839.

Description: House of two periods, facing S. The older part is the E unit, with originally opposed doorways and a very large chimney (possibly still older) standing out from the gable wall, the upper part of the stack being about 0.3 m away from the main gable. Rubble masonry. Two ovens, one at the rear, one at the side of the hearth. Slate coverings to the ovens and chimney offsets. There is also an ordinary end-chimney centrally at the apex of the same gable. Altered windows as in later house. Cobbled front yard.

To this original house, after demolition of its W part, a double-fronted, three window range, late C18 house was added. Central panelled door with canopy on brackets. Six-pane sash windows of small size, recessed. The whole of the front is hung with small slates. Elsewhere painted rubble masonry. Slate roof. End chimney at W. Some floor beams with plain stops to chamfers.

The central unit of the later house is occupied by stairs and a small rear cellar. At the rear, for the full length of the later house, a two-storey extension under a lean-to roof. The old part probably took the place of a back-kitchen in relation to the new house.

Low wall to front garden in rubble masonry, with a mounting block at the left of the gate.

Listed as a well preserved and attractive C18 farmhouse with a substantial earlier portion including a fine chimney.