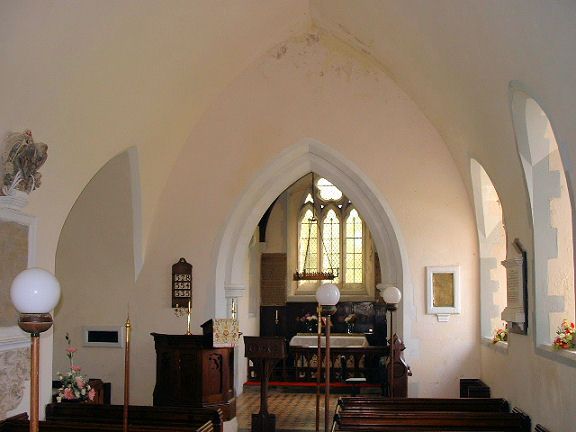 Prominently sited at N side of B4319 road.

A small church dedicated to the C6 Saint Pedrog. Perhaps C13, but much restored in 1854 (by R K Penson?) at the expense of Lord Cawdor. At this time the chancel was rebuilt and a vestry added. Chancel approx. 5.5 m by 3.5 m, nave approx 10 x 5 m, with vestry and transept at N. Porch at S and tower at W.

Exterior: The original masonry appears in the N wall of the nave and the W wall of the transept. Large sandstone courses, battered at the base. Smaller rubble courses at the head of the wall. A blocked low doorway is visible externally in the N wall of the nave. The tower is built in large irregular limestone courses, battered at base. The tower has a corbelled parapet with deep crenellations. There are louvred belfry openings to all faces. The stairs turret projects 0.3 m at the N and W, and is also crenellated. Exposed rafter verge without a bargeboard at the gable of the porch and the chancel.

To match the new chancel the whole of the original S side apart from the tower was thinly refaced in snecked masonry to no aesthetic advantage in the 1850s restoration. This was carried out in red sandstone, the stone of the porch being from a different source (or different quarry stratum) to that of the nave refacing. New bell-turret above the chancel arch, where there was one originally. Slate roof covering throughout, with rafter sprockets at eaves.

C19 Norman-style font. Memorials include an unusual brass in memory of William Lloyd, 1674, with skull and cross-bones. Baroque memorial to Lady Jone Mansell, 1692.

A modern churchyard cross on an old base.