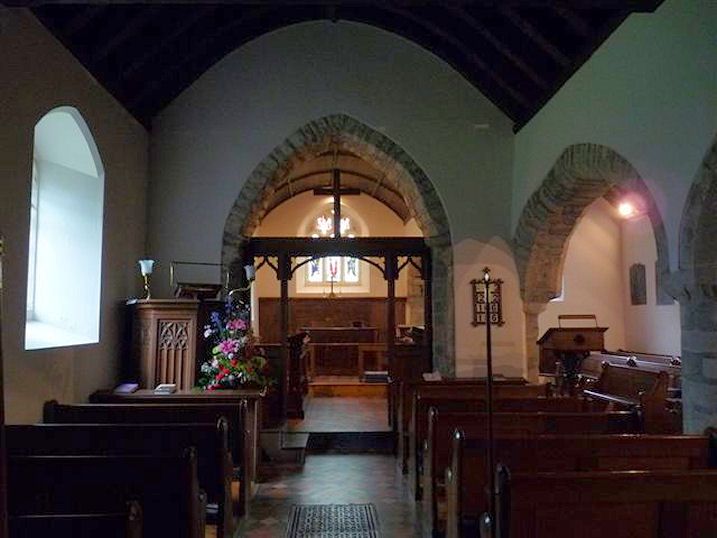 Location: 4 km S of village of Lampeter Velfrey, about 400 m N of Ludchurch village, in a square churchyard partly walled.

A church probably of the C13 and enlarged in the C15, which was unassertively restored in the C19. It is first mentioned as Ecclesia de Loudes in 1324 then as Eglwys Lwyd. The known list of rectors commences in 1381. To the original nave and chancel was added a large S aisle separated by an arcade with round columns in two ranges. The porch at N and the tower at W are also secondary to the original fabric, all of these enlargements probably dating from the C15.

The church was repaired and partially re-seated in c.1860, at the time of the Rev. Charles Cornish. Apart from this it was stated thirty years later that no substantial repairs had been carried out within living memory, and the state of repair was 'disgraceful'. J P Seddon surveyed the building in 1873, but does not appear to have carried out any restoration. His drawing records the preaching-centred layout then surviving. The altar was in its present position but the pulpit was located in the centre of the S aisle wall, with pews facing towards it from all parts of the church; some had their backs to the altar. The font was already in its present position at W of the nave, the area around it devoid of seating.

The architect F R Kempson (Kempson and Fowler of Bromyard, Hereford and Llandaff) restored the church in 1891-3, in the time of the Rev. A N F Keogh. The cost was estimated at about £600, but about £900 was spent. The interior was restored to a conventional pew layout, with the new pulpit beside the chancel arch. In this period the windows were restored. The architect showed an interesting respect for archaeological correctness when he stated 'the E window appeared to be a two light window, but when the masonry was removed it proved to be a three-light, which we have restored.'

Extensive quarrying has gradually encroached upon the churchyard. In 1839 it was to its present extent except for a small later excavation at the N side. The quarrying had perhaps reached almost its present extent as early as 1811 when Fenton remarked on the isolation of the church. In the early C19 there were proposals to demolish the church to exploit the valuable limestone remaining beneath it. The churchyard is now roughly square with a steep drop into the old quarries on three sides.

Large W tower, comparatively low nave with a slightly lower chancel, N porch and a large full-length S aisle. The church is built of the local grey limestone, uncoursed and hammer dressed, partly restored. Slated roofs with red-tile ridges. The gables at the E are linked and coped and the aisle gable at the W is also coped.

The tower is a particularly fine feature positioned to occupy, with its stairs turret, the full width of the W end of the nave. The parapet is locally typical with corbels and crenellations, and there is a smaller parapet, also corbelled and crenellated, to the stairs turret. Single belfry lights to W, E and S but double to N. Beneath this is the second storey with slits to N and S and the first storey with a narrow blocked light to the W. Over the W door is a nearly square window with chamfered sides, blocked, within a larger blocked arch.

The windows date mostly from the C19 restoration. Most were new in the restoration, but several are more or less original. The E window of the aisle was retained as a two-light Tudor window with a carved lintel in two pieces, not joined over the mullion. At the W of the S elevation is a single equilateral-arched light. The restored windows are in sandstone. They are generally two-light quatrefoil-headed windows. One single-light window of the same description is in the W of the porch. The E window was restored to three-lights. At the N of the chancel is a single light with an ogee head.

Nave with N porch and small chancel and large S aisle. The chancel arch and the arcade of the aisle are both of rough workmanship. The chancel is raised one step and the sanctuary one step more. The nave and aisle have roofs of common rafters with collars and arched braces, with additional tie beams at intervals. The shape of the vaulted base of the tower is visible in the W wall of the nave but the opening has been walled up. Coloured plain floor tiles in nave and chancel. Chancel and nave fittings all late C19. Cross above chancel screen.

The arcade between the nave and aisle is of three arches. The arcade between the chancel and aisle is similar but of two arches. The columns are round. The arches are four-centred and probably C15. The column caps in both parts of the arcade are decorated with many shields in relief, plus one grotesque face, but these may be recent as neither shields nor face are mentioned in Glynne's description in 1869.

A water stoup near the N door has a small square bowl and its sill carries a primitively carved face, the hair of which may be Tudor in style, between two possible roses. There is a larger water stoup near the blocked S door position, with a projecting circular stone bowl beneath a four-centred arch.

The E window and two other windows are of stained glass, the others are plain.

The font is square, on a modern pedestal.

Listed as a largely mediaeval church with a fine tower, retaining orignal form and much of its early fabric, and occupying a prominent site.