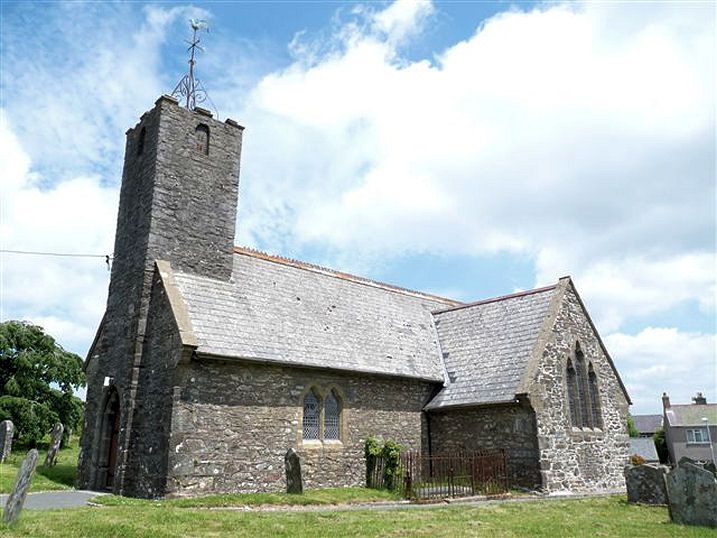 Location: In a prominent position in the centre of the village green at Maenclochog.

Anglican parish church, medieval origins but mostly of 1880-1. It was rebuilt with a 'small steeple' c. 1805 for Barrington Price of Temple Druid, said to need a new roof in 1845, and some work was done before 1865. Thoroughly restored 1880-1 by Middleton & Son of Cheltenham for £836, the restoration promoted by Col. J. Owen of Rosebush. According to the newspaper account, it was roofed in Rosebush slate over a nave roof of teak and chancel roof of oak, a vestry was added and the windows were replaced in Bath stone. The font and part of the pulpit were kept from the previous church (font looks later C19 and pulpit has gone). D. Young of Llangolman and E. Davies of Maenclochog were the builders.
A photograph of c. 1906 shows the tower barely higher than the ridge of the nave, with crude triangular opening on S. But it had been raised to present height by the 1920s.
The church contains two important C5 to C6 inscribed stones, brought from Llandeilo Lwydiarth churchyard nearby. They appear to relate to two brothers Andagellus and Coimagnus, a third stone, probably from the same site, was moved from Bwlchyclawdd (Temple Druid) to Cenarth before 1743 is to a son of Andagellus. A most unusual group of stones to one family.

Included for its special interest as the centrepiece of a substantial village green, unusual in the region. The church contains two important C5 to C6 inscribed stones (Scheduled Ancient Monument PE146).