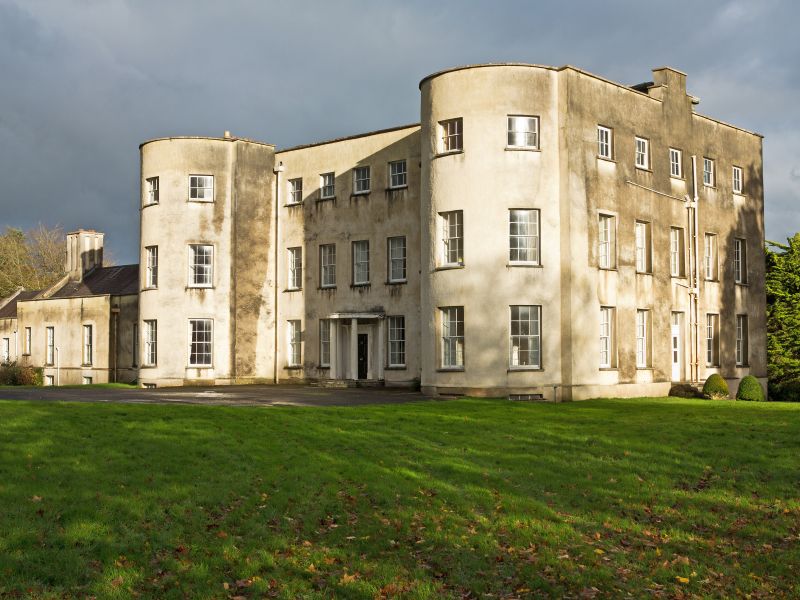 Slebech Park is built on the site of the commandery of the Knights Hospitallers of the Order of St John.
After the Dissolution the commandery became the seat of the Barlow family, and was demolished for the
construction of the present house by John Symmons, formerly of Llanstinan, who became the second
husband of Anne Barlow in 1773.

The new house was built in 1776. The architect is thought, on the basis of the draughtsmanship of
surviving drawings, to have been Anthony Keck: he had a considerable practice in Gloucestershire
Worcestershire and Herefordshire, producing country houses with plain exteriors and elegant interiors of
Adamsian derivation, many with bowed wings. J. Calvert, architect, of Swansea, worked here, but
apparently in a subsidiary role, and in 1779 there was a lawsuit over his fees, settled in his favour. Detailed
information about the house as first built is found in papers in the National Library. The design of the
house might suggest a conscious imitation of Picton Castle, with four bowed wings imitating the similarly
placed four main bastions of the Castle.

In 1778 Symmons, in financial difficulties, sold the house and estate to William Knox. Knox was a leading
figure in promoting enclosure and mineral exploitation locally. He in turn sold the house and estate to
Nathaniel Phillips, a proprietor of plantations in Jamaica, in 1792. Phillips is chiefly remembered as the
builder of Blackpool Mill. He married Mary Dorothea Philipps, daughter of the Rev. Edward Philipps; his
daughter, also Mary Dorothea, married Charles Frederick, Baron von Rutzen (of Courland, Latvia) and with
a slight change of name the de Rutzen family continued at Slebech Park until the C20.

Mrs Morgan visited in 1791, and referred to the exceedingly handsome house, with 25 bedrooms, each
with a dressing room adjoining, two parlours, study, drawing room, dining room and billiard room. Extensive repairs in 1803-05 perhaps by Thomas Beford of Llandeilo, more repairs in 1830 by Thomas Rowlands of Havefordwest. Fenton
gives a view of the house as it appeared c.1810. He criticised the poor siting (due, he implies, to a decision
to rebuild on the precise site of the former commandery) but was favourably impressed by the well-
connected range of offices, hothouses, conservatory, and an ornamental building on the hill to the N. The
present dining room (opposite the entrance) was formerly the ballroom. To the left the wings contained
the dining room and a room at one time used as a kitchen, now a library, to the right the drawing room and
study. The music room was on the first floor at the right, at front, and the billiard room was above the
entrance hall.

The house was converted to flats and the battlements removed in 1955 by Sir Thomas Meyrick. The house was purchased in 1959 by the Hon. William and Lady Jean Philipps, who restored it to a single dwelling. Some of the original detail was reinstated, with other items brought in from elsewhere, including Stackpole Court (demolished 1962).

With its strongly advancing bowed wings the house is an imposing late Georgian design. It is constructed of
rendered stonework. The parapet has been reduced. The house is of three storeys at front and four at the
side and back. There is a small porch at the main entrance. The entrance to the house faces rising ground;
the falling ground, with fine views over the estuary, is reserved for the best reception rooms at the rear.

In both the front and rear elevations there is a straight range of five windows (front) or four windows
(rear), plus three windows to each semi-circular advancing wing. The side elevation, to the SW, is of five
windows. Some windows, where there are fireplaces or other original obstructions, are blind, but, unusually
are provided with full window joinery and glazing. All the windows are of sash type with concealed frames.
Top floor windows of six panes, basement nine, elsewhere twelve. Many of the original hornless sashes
remain in place, and there remains a large amount of handmade glass. In the curved bays the joinery is also
formed on the curve.

The central open entrance porch is semicircular, with plain round columns or half columns, lacking caps.
It looks like an afterthought to the design. The porch roof is flat with a little crenellated parapet on
corbels. The porch is paved in limestone. Six-panel door in doorcasing, with shallow thin pilasters and no
fanlight.

The plan of Slebech Park is symmetrical and two rooms deep. The layout of rooms and staircases is basic but the main rooms contain high quality Adamesque detail with fireplaces, cornices and joinery designed in matching schemes.

The central entrance hall is flanked by spine corridors with enclosed staircases to each side of the hall. The main stair to the SW is modest, with stick balusters (three per tread) and scrolled mahogany handrail. The NW stair, also with stick-balusters, is full-height and was partly replaced in the C20. To the rear of the hall is the original saloon, now the dining room. To left and right of this core of the house are the bowed front and rear wings containing the reception rooms, including the drawing room (SE), study (SW), library (NE), and a nursery (former dining room) to the NW. The spinal corridor continues NE into the service range.

The entrance hall has a grey veined marble neo-Jacobean chimneypiece with pilasters and strapwork, imported in the later C20. Plaster Doric frieze, matched in the timber cornice over the front door. Plaster ceiling rose, probably mid C19. Plain flush doors to the corridor each side. The dining room opposite is finely proportioned and retains six-panel mahogany doors with Doric architraves, an Adam-style ceiling cornice and a chimneypiece in the style of Henry Cheere which was purchased at the Stackpole Court sale and installed in 1971. It has red veined marble with white marble enrichment; central frieze tablet depicting a hound chasing a hare. Centre feature to the ceiling and cornice with small modillions and dentils. Six-panel mahogany doors off spine passages to reception rooms: the architraves of those to study and drawing rooms with strips of gilded oak-leaf carving (purchased from Stackpole Court) added to their architraves. The drawing room has an Adamesque plaster frieze. Fine original marble chimneypiece with tapering fluted pilasters and carved central panel. There were originally large oval and square wall panels, scraped off at a later date, their outlines still visible. Victorian ceiling rose. Architraves to windows and doors with fluted detail and corner roundels; matching dado rail. In the study, a good plaster frieze. Marble chimneypiece with tapering fluted standards and central tablet with garlanded urns flanking anthemions. Window and door architraves with a carved lozenge pattern, matched in the dado rails. The library retains its original painted bookcases, restored in 1960. Opposite the (original) chimneypiece, a long seven-bay range of bookcases, the central and penultimate bays wider. Flanking the centre are narrow break-front bays Each side of the chimneypiece is a single bay bookcase. The bookcases all have pilasters with delicate droplet detail, the cornices with fluting and corner ovals. The fluted-and-oval sill of the bookcases is matched in the dado rail. Delicate plaster frieze of ovals and urns, matched in the central tablet of the original chimneypiece. The latter is of white marble with some red marble inlay. Scrolled sides and repeated anthemions flanking the tablet. The nursery has an imported timber fire surround. Plaster frieze of repeated palmettes.

On the first floor, the former music room (SW) has a plaster frieze of alternating triglyphs and panels depicting musical instruments. Original marble chimneypiece of white marble with red inlay, its frieze matching that of the cornice. Central tablet with crossed lyre and horn. Over the hall, the bedroom frieze has alternating shields and crossed lancets. Other bedrooms has imported fireplaces, but original simple cornices. Plain attic rooms.

Listed at II* for its special architectural interest as an imposing and interesting late C18 house retaining much of its character and including fine interiors.