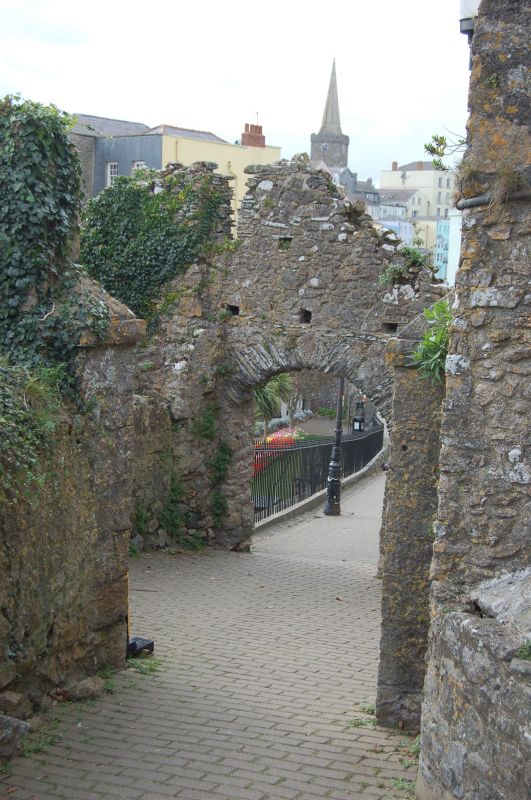 Location: Remains are situated at various locations on Castle Hill, on the NE side of the town.

Fragmentary remains of a medieval castle whose individual buildings were mentioned in an Inquisition of 1386. It is not know for certain when the masonry castle was built, a C12 Norman fort was taken by the Welsh in 1153 and 1187. The castle was part of the lordship of Pembroke in the C13, and the present remains are almost certainly C13, but whether built for the Marshals before 1245 or their successor William Valence (d 1296) is uncertain, nor is the extent of damage sustained in 1260 when Llywelyn the Last sacked the town. In disrepair from the C14, the castle saw action in the C17, being held for the Parliament for most of the Civil War, but taken for 10 weeks in 1648 by the Royalists. In 1818 a look-out tower and boat-house for the coastguard was built. In the 1860s the Castle Hill was laid out with walks and the National Memorial to the Prince Consort erected.
The National School was built into a medieval domestic building, possibly the hall, depicted as roofless and gable-ended in early views. The school was founded in 1832, enlarged in 1842, and closed in 1874. The building became the Tenby Museum in 1878, and is listed separately.

Fragmentary remains of C13 castle. Of the outer walls very little remains of the main wall across the neck of the headland, but a stretch survives to N, before the 1904 lifeboat house, with arrowslits and wall-walk, and a short length on the S next to the gate and barbican. A more fragmentary and much repaired piece is next to the museum, which is itself built into a medieval domestic building, possibly the hall. A simple square gate through the curtain wall is the main entry but protected by an impressive D-shaped barbican across the approach path. On the summit of Castle Hill the small round watch tower is earlier than the square tower added to W, both medieval. Rubble stone with various altered openings, the square tower containing a newel staircase with access to the roof. Footings of domestic buildings remain on the landward side. Tenby Museum is listed separately.