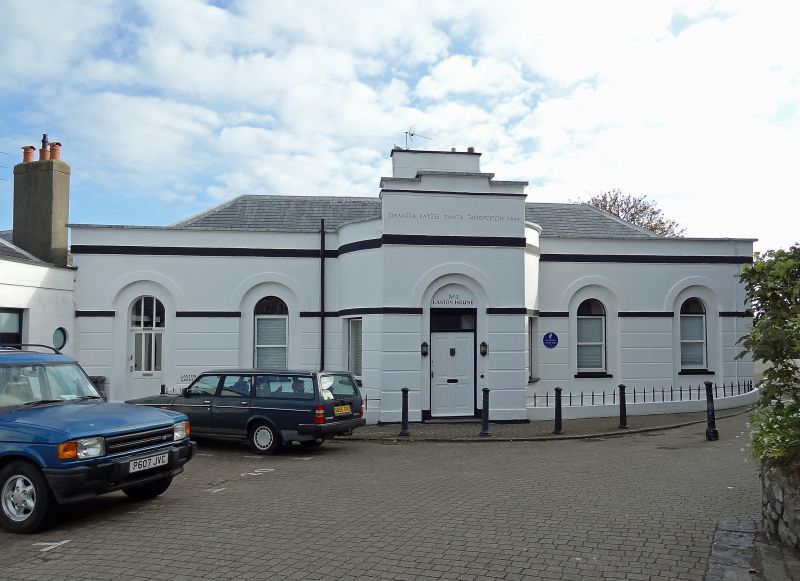 Location: Situated on the N side of Castle Square facing S to St Julian's Street.

Built in 1806-9 as a public bath house for Sir William Paxton of Middleton Hall, Carmarthenshire, to designs by S P Cockerell of London. When sold on Paxton's death in 1824 the printed sale plans appear to be Cockerell's original design and show the arrangements, then on three levels. The single-storey entrance front had a circular vestibule with tea-room to the right; two bedrooms, housekeeper's store and cupping room to the left; and open-well stairs down to the lower level in the centre. Here three small hot baths each with dressing-room were to the left; the hot-water reservoir was under the vestibule; and kitchen and attendants room were to the right. Further steps down led to a narrow row of 8 dressing rooms with 4 paired exits to the cold baths, curved-ended public baths to the centre ('Ladies' General Bath and Gentlemens' Public Bath') each with 2 small private baths to the outer side, and fronted by a curved-walled reservoir filled from the sea. The baths were damaged by fire in 1809 and repaired 1809-10. They were refitted in 1837, for Captain C C Wells. Alterations to the town baths were advertised in 1877, but in about 1884 they were closed and sold to become a private house. Old photographs show the building used in the late C19 as C S Allen's photographic studio.
The elevations printed in 1824 suggest that originally the outer windows were intended to be lunettes above the impost band only, but early views do not confirm that they were built like this. Present rear window arrangement does not accord with 1824 floor plans.
Now subdivided: No 1 Laston House has the upper floor apart from the left bay, No 2, which is mainly in the upper floor of the Assembly Rooms, listed under Pier Hill. Garden Flat occupies the lower floor, while the patio that covers the former cold-baths and reservoir belongs to Lower Deck (also part of the Assembly Rooms building).

House, former marine baths, painted stucco with slate hipped roof behind parapets, and large stuccoed axial stack on front wall behind porch. Single-storey and basement to Castle Square, two-storey and basement to rear. Five-window elevation to Castle Square with projecting porch in centre and two windows each side. Channelled ground floor up to impost band level, plain stucco above, raised band at cornice level and roughcast parapet above. The stepped plinth, impost band and upper band are in painted tooled stone. Stone also to recessed surround of centre door. Windows and centre doorway in projecting porch are arched in arched recesses. Porch has quadrant curved sides with square windows and flat facade in form of minimal triumphal arch with tall parapet above band with thin upper string course under stepped painted stone blocking course. The parapet is inscribed in Greek letters 'Thalassa kleuzei panta t'anthropon kaka', translated as `The sea cleanses all the evils of men' (Euripides). Doors and windows are all altered. Front C20 double doors with overlight under blind tympanum, plate glass to square windows, plateglass sashes with plain fans to 2 right windows and one to left. Outer left window is replaced with a half-glazed door, to No 2, with 3-pane fanlight. Basement flat has entry down steps from left to inserted door in side of curved projection, and has 2 12-pane sashes under right side windows. Blank right end wall.
Elevation to the sea, stuccoed, 2 storeys with large late C19 canted oriel window each side on first floor, 12-pane sash between. Ground floor has 2 large 12-pane sashes under left oriel, 2 small 12-pane sashes under centre, and 3 large 12-pane sashes under right oriel. Basement door in centre and louvred opening to left giving onto sea-water reservoir or inlet. Curving terrace in front is infill of the former cold baths and reservoir, but outer retaining wall rebuilt in front of the original in late C20 after storm damage.

Graded II* as a Georgian marine bath designed by a leading architect and for the historical importance in the development of Tenby as a resort.