A Grade I Listed Building in Talgarth, Powys 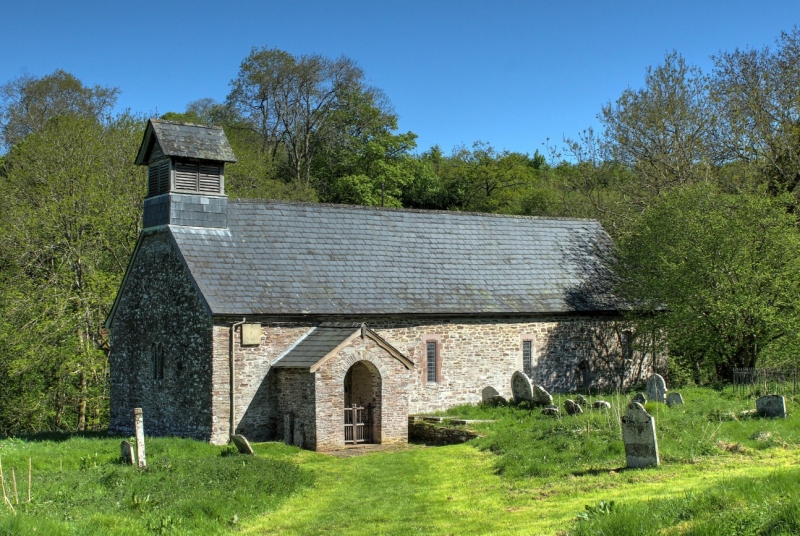 Location: Located at the head of the Cwm Rhyd-Ellywe, within a raised oval walled churchyard, on a small plateau beneath the Rh_s fawr.

Parish church of the former parish of St Ellywe. C13/C15, carefully restored in 1905 by Baldwin of Brecon, and further repaired in 1981.

At W end, a gabled timber bell turret, by Baldwin of Brecon, 1905, rises from a slate-hung base. Louvred 2-light openings.

On the SW wall of the church there is a fine sandstone sundial, inscribed PB WARDEN 1686, set at high level.

Attached to the S side of the porch, two C7/C9 grave markers, one with a crude stemmed ring cross, each quadrant with ring and dimple, and the other with a double ring cross, the arms crossed and the quadrants containing similar dimples. Set against the E end are two tomb slabs, (a) David Powell of Cwm-hwnt d1725, a heart, and (b) slab with bold raised lettering within a moulded margin, arms and trefoil, to William Aubrey of Llanelliyw, d 1716.

Stone flagged floor. Walls retain early, probably medieval plaster. Roof of 6 bays - tie and collar beam trusses with cusped windbraces to the single tier of purlins, but trusses 3 and 4 have arched braces to collar and a wide runner. Open rafters. At truss 4 the floor rises 1 step, forming the division to the chancel, the truss being boarded both above and below the tie beam to form a basic screen, and painted red with, above tie beam level, stencilled white roses. At the centre, the unpainted impression of a rood cross, and attenuated cross patt_e. Below the tie, the screen is perforated with 2 circles and four quatrefoils. Below the lower bressumer, the screen is open on moulded posts and responds, and arch braces. In front of the screen, a second timber screen forms, with joists a loft in front front of the main screen, originally, according to Haslan, with boarding either side of the centre passage to enclose nave altars. Similar oak posts and responds, panelled in red, with stencilled cinquefoils, and a moulded rood beam, originally with a painted inscription. This screen is cut back at the S end to insert the steps to the pulpit. There was originally a coved roof over the loft. Cut off remains of a second moulded rood beam. Notwithstanding alterations this remains an exceptional regional example of a medieval rood screen.

Altar rail, late C17, with square newels, ringed balusters and a moulded rail. The sanctuary is partially paved with mid C18 tomb slabs, but one of 1640. Double piscina of E wall and an aumbrey in the S wall.

Font, opposite S door, and octagonal cone raised on a base, with C17 oak cover. Pulpit, early C18, square, framed and boarded, raised on a stone plinth and having bracketed reading shelves.
Furniture: Two C17-C18 oak pews with 2 terminals to each square-cut end.

Included at Grade I as an important country church that has retained much of its medieval interior, including wall paintings and an exceptional rood screen.