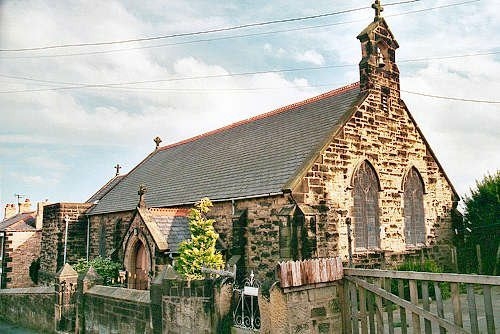 Location: Towards the top of Church Road, which is at the NE of Brynteg, running EW between Wrexham Road and Victoria Road

Established as a mission church in 1894, the church became a Capel of Ease to Saint Paul's Church, Pentre Broughton, in 1908. It owed its establishment to the Reverend Meredith Hamer, who had been curate at Berse Drelincourt for a time but resigned from the ministry in 1885. With his wife Margaret, he was a major benefactor of the church in this area: the building was extended to the west in 1916, and the furnishings were installed at that time, the gift of Margaret Hamer, and the work of Cecil Hare.

Three and a half bay nave, expressed by scissor-braced principal trusses sprung from cusped wall-posts and braces, and with closely spaced rafters. Chancel has closely spaced scissor-braced rafters. The furnishings form a complete series of exceptional quality - the work of Cecil Hare. Font in centre of half-bay to west has octagonal basin on cylindrical shaft raised up steps. It is surmounted by a traceried panelled tester, its canopy enriched by finely worked vine-scroll and fret-work. Gilded suns enrich its panelled underside. Chancel separated by screen with 4 traceried panels to either side of the central archway: linen-fold panelling with quatrefoil bands, openwork and fine filigree tracery. Central arch has ogival tracery, and the screen is surmounted by a fleur-de-lys frieze. The pulpit is integral to the north of the screen, and is similarly enriched with open-work panelling. The linen-fold choir stalls form part of the same decorative scheme, as do the communion rails which are enriched with a quatrefoil band. Finely worked reredos comprising a a series of panels enriched with free-standing tracery, and containing gilded emblems of the evangelists flanking a pair of rejoicing angels holding a wreath. To either side of the reredos, traceried panels house bright painted angels each carrying a scroll. Stained glass in east window - a painterly scheme probably by Burlison and Grylles: the crucifixion in a spacious landscape.